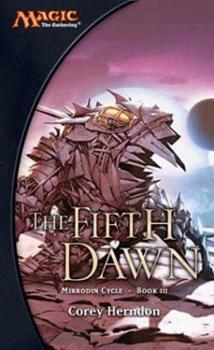 Published by Thriftbooks.com User , 15 years ago
The Fifth Dawn (Mirrodin Cycle: Book 3) By: Cory J. Herndon This is the third and final book in the Mirrodin Cycle. Glissa is on the road to her final confrontation with the insane guardian of Mirrodin, Memnarch. But as Glissa travels, she makes new friends, but in the process loses several old ones. Memnarch's blind ambitions to ascend and become a planeswalker unleashes a great war on Mirrodin and only Glissa and the creatures of Mirrodin can stop the death and destruction wrought by the metalic constructs and the undead Nim. However, in the midst of the remaining survivors, there is an evil that threatens to destroy everything that the survivors have worked so hard for. This is an excellent ending to the series. The thing that scared me the most was the bleak ending, but to adapt a line from The Holy Grail, "...it got better." I must say that for my first cycle, I am hooked and can't wait to get started on my next cycle which is the Kamigawa cycle. The only thing that need improvment is the need for a better editing staff. Way too may grammar errors in these books, but they are still enjoyable. This book is an excellent read, 10/10 for sure.

Published by Thriftbooks.com User , 16 years ago
The Mirrodin Cycle is the sole reason i got hooked back on reading when i bought the first book in Canada during geology field camp, because it is solely enthralling. It was very captivating for me, an escape. This trilogy-ender isn't as well written as "The Moons of Mirrodin", but it aptly ties together everything from this series full of interesting, loveable characters, action-packed adventures, torment, and revenge. Mirrodin is a fascinating world, and Memnarch an annoying, ruthless tyrant; a worthy villian. The series is a great read for any fantasy fan, with no previous love of "Magic:The Gathering" necessary.

Published by Thriftbooks.com User , 16 years ago
The Fifth Dawn is a great book. The book really explains what is going on. I like how the levelers make the pyramid by connecting themselves. I don't think Bosh should have died in The Darksteel Eye. I found out they made a mistake in the Magic the Gathering card game because instead of moonburst they put sunburst. I like how Glissa does those spells that destroy artifacts. This book is really good at attrackting the readers attention and is really good at explaining battles. I recommend this book to Magic the Gathering card game players.

could have been better

Published by Thriftbooks.com User , 17 years ago
All in all this was a very good book and a very good end to the Mirrodin cycle. My biggest problem was when Glissa, the main character, was frozen in time for five years and then reawoken like nothing happen. I hate it when things like that happen. Also as a constant in this cyce sometimes it was hard to picture certain things in the story, but other than that it was really good, though I'm still sad Bosh died in the last book

Best of the Mirrodin Cycle by Far

Published by Thriftbooks.com User , 17 years ago
After having suffered through four absolutely atrocious Magic books in a row (Legions, Scourge, Moons of Mirrodin, Darksteel Eye), I had very, very low expectations for this book.I'm happy to say that this was far, far better than I ever thought it would be. Unlike the previous two volumes in this cycle, the characters are actually developed and interesting. There aren't as many pointless fighting scenes featuring invincible heroes (very few, in fact). The author's attempts at humor are actually funny.As far as Magic books go, this is a very good one. This book is responsible for revitalizing my hopes for the future of the Magic novel line.
Copyright © 2020 Thriftbooks.com Terms of Use | Privacy Policy | Do Not Sell My Personal Information | Accessibility Statement
ThriftBooks® and the ThriftBooks® logo are registered trademarks of Thrift Books Global, LLC