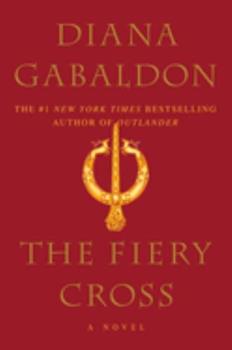 (Book #5 in the Outlander Series)

The dazzling fifth volume of Diana Gabaldon's extraordinary Outlander saga, featuring 18th-century Scotsman James Fraser and his 20th-century time-traveling wife, Claire Randall. The year is 1771, and war is coming. Jamie Fraser's wife tells him so. Little as he wishes to, he must believe it, for hers is a gift of dreadful prophecy--a time-traveler's certain knowledge. Born in the year of Our Lord 1918, Claire Randall served England as a nurse on...

Published by Thriftbooks.com User , 17 years ago
I read all 5 novels in last 4 months on the recommendation of a coworker. While waiting for her to bring in this installment (The Fiery Cross), I read many of the reviews here. I was very disappointed since most of then said that the book was slow, boring and had no real storyline. When I started reading the book, I almost had a sense of dread because I thought it was going to be difficult to get through. This worsened because the first 150 pages were all about the events of one day and that has been complained about at length. Well, I couldn't have been more wrong. I found this installment to be "thoroughly enjoyable." It wasn't, in my opinion, boring or slow. I enjoyed it immensely and am now waiting with baited breath for the next book in the series, The Breath of Snow and Ashes. I'm sure people's opinions differ. All I will say is that if you enjoyed the previous installments, do yourself a favor and read this one and formulate your own opinion. If I wasn't borrowing this book from my coworker, I might not of bought it based on the reviews and that would have been a mistake.

Not for the faint of heart...

Published by Thriftbooks.com User , 18 years ago
...but thoroughly satisfying nevertheless. It took me awhile to slow down and meet the measured pace that Gabaldon sets in this novel. There is action and adventure aplenty but it doesn't happen all at once. So, settle down for a slow and easy read, and allow time to absorb the detail and sort out the characters. I read the Drums of Autumn, the previous book in the series, about 4 years ago and it took me awhile to remember the peripheral characters. (I still don't remember who Lizzie is [gulp] so I'll have to check out the Outlandish Companion). To comment on some of the reviews I've read where readers were disappointed in this book: Diana Gabaldon is an intelligent writer. This book is meticulously researched and rendered. If you are not interested in the historical detail and life in colonial america, you will be disappointed. If you want a historical romance, you'll be disappointed. If you want a time-travel novel, you will be disappointed. etc. etc. This is a genre that is all her own. If you want a fascinating historical read with wonderfully written characters that are easily imagined because they are so true to life, than you will be delighted. Furthermore, I like the way the prose switches from first person (Claire) to second-person so that must be a matter of personal taste. My favorite character is Roger. Bree is probably my least favorite character and I noticed another reviewer felt the same way but I'm not sure why I don't like her as well as the other characters. The descriptions of Jemmy, their son are so true to life that anyone who has had or lived with children will smile at his activities as described [and about a paragraph-- no more-- is spent on potty training, *not* a whole chapter as another reviewer notes, and it leads, interestingly, to a revelation in Roger's history].You could read this without having read the previous novels in the triology but I wouldn't recommend it.

It's all in the details

Published by Thriftbooks.com User , 19 years ago
I finished The Fiery Cross a couple of days ago, and while it's not my favorite of the series (nothing beats the first one), I enjoyed it thoroughly. Diana Gabaldon has taken us back once again to the eighteenth century and revealed it to us in glorious detail. I can't think of a better way to spend an afternoon than with Jamie and Claire Fraser. I also appreciated this book greatly as a further deepening of Roger and Brianna's story. In the previous books, Bree wasn't really an interesting character to me - but here her character is fleshed out considerably. Likewise Roger - although his character was well-developed before this book, he endures hardships here that test his self-image and strength of character. And of course, Claire and Jamie are the same wonderful characters as ever - you really see here how their love has developed over the years.I understand the complaints of some that this book doesn't have a plot, that it moves too slowly, etc. Those are valid points to make - there's nothing really earth-shattering that happens in this installment, although you know that something (the Revolution) is looming just beyond the horizon. For me, though, the beauty of the book was in the details - the very fact that this is for the most part a book about everyday life. More than in any of the rest of the books, Diana revels in these details. While some may find all this detail "boring," it allows us to really understand what life was like in the past, and it fleshes out all of the characters immeasurably. I closed the book feeling satisfied and yet craving more - I can't wait to find out how the entire saga ends! The Fiery Cross is a book for true fans who love these characters.

Published by Thriftbooks.com User , 19 years ago
I can say that experience shows highly here in Diana's 4th. Her imagination does not run wild but keeps perspective to the time frame in which she writes, 1700's to 1900's. I don't care what anyone says, fantasy can be stupid, and a stupid waste of time if it is too inventive, Diana keeps the balance. I want to read the book again, not because I didn't understand it, I want to go back and re live it. I also want to recommend another book like this, Karl Mark Maddox's SB 1 or God.

Published by Thriftbooks.com User , 19 years ago
Having read and thoroughly enjoyed the previous Diana Gabaldon books about the tales of Jamie Fraser and Claire Randall this was simply a book I had to read. Up until around page 300 I kept wanting to put it down, hoping to come back and find it as enthralling as I found the previous books. And I did, I found myself smiling at the dry sense of humour Jamie possess. I found tears rolling down my cheeks and at other times found I was holding my breath. The attention to detail and Diana's ability to draw you into the story was wonderful. It is a long read at 976 pages and even though I kept waiting for something to happen ( as per previous books ) I wouldn't have missed reading it.
Copyright © 2020 Thriftbooks.com Terms of Use | Privacy Policy | Do Not Sell My Personal Information | Accessibility Statement
ThriftBooks® and the ThriftBooks® logo are registered trademarks of Thrift Books Global, LLC