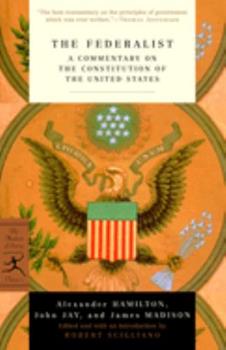 The Federalist: A Commentary on the Constitution of the United States

The series of essays that comprise The Federalist constitutes one of the key texts of the American Revolution and the democratic system created in the wake of independence. Written in 1787 and 1788 by Alexander Hamilton, James Madison, and John Jay to promote the ratification of the proposed Constitution, these papers stand as perhaps the most eloquent testimonial to democracy that exists. They describe the ideas behind the American system of government:...

Published by Yuck , 5 months ago
This one is ugly honestly. Come on.

Published by Thriftbooks.com User , 13 years ago
I purchased this book as a gift for a colleague who is quite the fan of all things related to the United States Constitution. He dropped a hint that he wanted a nice quality copy of The Federalist Papers for his 10 year anniversary with our firm, and this version fit the bill quite perfectly. The cover design has a nice look to it, the book feels substantial, the text is easy to read, and he was (fortunately) quite pleased upon receiving the gift.

Published by Thriftbooks.com User , 13 years ago
So inspirational, makes one even more proud of our country. The classic style of writing really brings you back to the day, as if you're listening to the great men debate the structure of our young government.

Published by Thriftbooks.com User , 16 years ago
I rate this book 5 stars because the content is so vital to understanding what our founding fathers were thinking as they tried to convince the Americans in New York that a "Foederal" government, rather than individual states or territories, was the best way to bring the new union together. OK, now readability. Does anyone else have trouble understanding the writing style of the late 17th century? I appreciate that the book is true to the original newspaper articles, but sometimes my eyes glaze over and I lose the gist of what the author was trying to say. For example: "The disciplined armies always kept on foot on the continent of Europe, though they bear a malignant aspect to liberty and oeconomy, have notwithstanding been productive of the signal advantage, of rendering sudden conquests impracticable, and of preventing that rapid desolation, which used to mark the progress of war, prior to their introduction." I think he's saying that a standing army will prevent foreign powers from easily invading your country. But I have to do this "translation" in my head as I read each sentence, so the reading really gets bogged down. So, this work is not something that most people can just breeze through - it takes some thought and understanding of the culture and style of the time. If there is a modern-language translation available, I would buy that as a supplement, because the content definitely is worth learning!

History, Veneration and The Federalist

Published by Thriftbooks.com User , 17 years ago
We want our founders to be demi-gods and our original texts to be divinely inspired. For an example of this nonsense, please see the first review on this page. I want to offer a vision of The Federalist in historical context. I will argue that to see it thus enlarges its greatness will allowing us to admit its faults. In many ways, the developments that led to the Constitution of 1787 started as soon as colonists reached our eastern shores. We had at least 150 years of experimentation in writing charters and in representative governance behind us by 1787. After the Declaration of Independence the States either wrote new constitutions or reaffirmed old charters. The national government wrote the Articles of Confederation and we lived under that from 1781 to the late 1780s. The Federalist should be seen as part of that ongoing development. More specifically, it should be seen as part of the ratification debates in New York. Largely written by Madison and Hamilton, these papers reflect the compromises that the founders made in regards to the Constitution. Madison had wanted the President to have a veto over any state laws. Hamilton had favored a President for life during good behavior (read #78 in re the appointment for life of federal judges to sense the fervor that Hamilton felt for the benefits of lifetime tenure). Neither man believed in the necessity of a Bill of Rights. Madison eventually saw the political necessity of such amendments. During the first United States Congress he wrote up the Bill of Rights and guided them through passage. This way he could make sure they did not grow too numerous. As a whole then The Federalist should be seen as rhetorical and political arguments for passage of a Constitution that the authors had some doubts about. Of course, as Publius they could express no doubts. Madison, Hamiltion and Jay used this pseudonym which was a typical rhetorical device of elite writers at the time. (See Saul Cornell's The Other Founders for a nice discussion of the variety of rhetorical strategies used by writers during the ratification debates.) The idea was that hiding their identities would allow readers to focus on the quality of their arguments. As a result, there are many passages that can strike the modern reader as duplicitous because Publius pretends to know nothing of what went on during the convention. Madison and Hamilton, of course, were instrumental throughout the Constitutional Convention. Publius works his explication of the need for the Constitution by critiquing the Articles of Confederation then by going thru the new document, article by article supposedly answering all objections. His counterarguments are largely of two types. In the first type, he will state a political principle so "obvious" that any "candid" reader will instantly agree to it. Publius then builds his arguments from there. The famous paper #10 is one such chain of argument. Or Publius will demolish the arguments offered against the Constitutio

Published by Thriftbooks.com User , 22 years ago
The Federalist Papers were written primarily by Alexander Hamilton and James Maddison (with a few also written by John Jay) under the pen name of "Publius." The papers were written to gain support of the residents of New York State for ratification of the Constitution. First, it is important to note what the Papers are not! They are not debates among the drafters of the Constitution which can serve as legislative history as to the drafters' intent. Rather, ithey are the opinion of "Publius" as to why we needed a Constitution setting up a federal system with a strong national government rather than a weaker system under the failed Articles of Confederation. For example, how could we have a national defense if one small confederation of states were attacked and the other states were not bound by a strong antional government to come to it's defense? Hamilton and Madison grew to be political rivals so it is interesting to see the unity they had in advocating our system of government under the proposed Constitution. Of particular interest is the classic warning against factions and the mental wrestling over the best way to temper their effects. I believe that whether you plow through all of the Papers cover to cover, or read them selectively, you will gain an invaluable appreciation for the genius behind our system of government.
Trustpilot
Copyright © 2022 Thriftbooks.com Terms of Use | Privacy Policy | Do Not Sell or Share My Personal Information | Accessibility Statement
ThriftBooks® and the ThriftBooks® logo are registered trademarks of Thrift Books Global, LLC