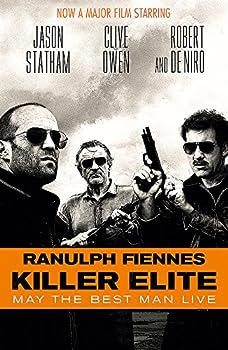 This description may be from another edition of this product. The "enthralling page-turner" ( Library Journal ) now a major motion picture starring Jason Statham, Clive Owen, and Robert De Niro Here is a gripping novel, inspired by real-life events, about a...

A book to make you think.

Published by Thriftbooks.com User , 12 years ago
Sir Ranulph Twisleton Wickham Fiennes BT, OBE (and holder of the Polar Medal with Bar!) is undoubtedly the greatest living British explorer. He also served as an officer with the Special Air Service Regiment in the early seventies at a time when I was attached to that Regiment as a corporal in the Pay Office. We met briefly then and again in the late eighties when I was involved with Operation Raleigh. Though "Ran" - as he introduced himself on the latter occasion, has no reason to recall either meeting, I will always remember this man as someone with great presence who has come to symbolise great things and great achievements. In many ways he is the most British of men. In his book "The Feather Men," the reader is left wondering whether or not it is a work of fact or fiction. It is an enthralling and exciting read and I am surprised it has not yet been made into a film. Throughout the world there are certain "standards." For example, people might refer to a specific make of car, as that country's equivalent of a Rolls Royce. This is because Rolls Royce has become the standard for excellence in the making of cars. Similarly, when describing the world's Special Forces, they often refer to certain elite organisations as that country's equivalent of the SAS. I had the privilege of serving with the SAS over 30 years ago but was never SAS trained. Ran Fiennes was and, therefore, knows what he is talking about. That is why you will be left wondering. Altogether and excellent book. NM British Army Major (retired).

Published by Thriftbooks.com User , 15 years ago
This book is incredible. Not only is it based on a true story but it is so well written that it is easy to get submerged in the action and espionage that it seems impossible that it is real. Would highly recommend it to anyone.

Published by Thriftbooks.com User , 17 years ago
Could not simply place the book down. Had me gripped from start to finish. Quite a lot to take in with various names being slung around the place early on but if you bare with this and keep concentrating it is greatly rewarded.I had the pleasure to ask Sir Ranulph Fiennes whether the book was fact or fiction, he said that was up to the reader to decide and he would not say or comment.great book, great man.

The best book I have ever read.

Published by Thriftbooks.com User , 18 years ago
A few words on The Feather Men,I bought the book on an off chance and it was so gripping that I could not put it down.For a factual story it makes even the most far fetched fiction look run of the mill stuff.People like Ranulph Fiennes are truly a cut above the rest,a must read for any one who is interested in special services operations.

Published by Thriftbooks.com User , 23 years ago
I am absolutely confounded as to why this allegedly true story has never been memorialized on film. I'd bet my entire portfolio on its mega-box office success. True or not, this book is a gripping, stunning story, that, if conjured by ANY other modern day novelist, would surely be his/her defining epiphany. Fiennes is large, a mighty oak amongst wilting thistles. Clancy and LeCarre must demur when Fiennes raps his lectern. This soldier beat these staid pros in short order--about 300 pages. The other reviews have already told you too much. Just get it and be prepared. A MIND BLOWER!!!
Copyright © 2020 Thriftbooks.com Terms of Use | Privacy Policy | Do Not Sell My Personal Information | Accessibility Statement
ThriftBooks® and the ThriftBooks® logo are registered trademarks of Thrift Books Global, LLC