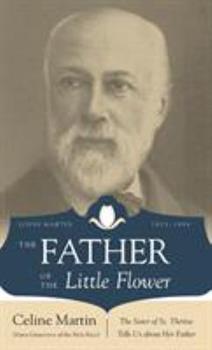 Louis Martin was the pattern of Fatherhood on which St. Therese built her now famous "Little Way of Spiritual Childhood." Louis was declared Venerable by the Church in 1994 and Cannonized in 2015, along with his wife, Zelie, because of his "heroic virtue." What kind of a father was he? These reminiscences byhis daugther, Celine, describe Louis Martin's marriage at age 34, his love and support for Zelie, his firm discipline yet tender affection for...

Father of a Saint/A Saint Himself

Published by Thriftbooks.com User , 13 years ago
This is a little book about Louis Martin, the father of St. Therese of Lisieux. If St. Therese had not had Louis Martin for a father and Zelie Martin for a mother, she might not have became a saint. Both her parents were very holy people and both of them will be canonized in October 2009. This book is written by Celine Martin, sister of St. Therese. In it she conveys the wonderful, humble, holy man that Louis Martin was. Louis had desired to be a religious, but that was not God's plan. Instead he married and had 9 children, 5 of them lived to adulthood and they all became nuns. Everyone loved this holy, humble man. He was what every father should be. Louis Martin suffered much in his later years, offering himself to God as a victim. Those who cared for him stated that he never complained and was a joy to care for. I thought of Louis Martin while reading Robert Baker's The Questioner's Prayer,in which he states "The password for entrance into the Kingdom of heaven is humility." I recommend this book to anyone interested in learning more about how to be a saint. "The good God gave me a father and mother more worthy of Heaven that of earth.".....St. Therese, Letter 261

The Father of the Little Flower: Louis Martin

Published by Thriftbooks.com User , 14 years ago
I think this is a spiritual classic. It is no wonder that they were the parents of one of the greatest saints in our Chruch's history. What I loved abou he and his wife is that they led simple but deeply spiritual lives. Elaine

A Worthy Father of St. Therese

Published by Thriftbooks.com User , 14 years ago
After reading both this book and the biography of his saintly wife, Zelie, it is no wonder St. Therese soared to such heights. If you are a husband and father, this book would be a great inspiration to you and you could find no better model to emulate. Louis Martin was many things all at once: a gentleman, protector, courageous leader, and a man of great faith and prayer. I thorougly enjoyed learning about the Little Flower's amazing father. (Note: the book is written by St. There's sister, Celine, so the accuracy is reliable.)
Trustpilot
Copyright © 2022 Thriftbooks.com Terms of Use | Privacy Policy | Do Not Sell or Share My Personal Information | Accessibility Statement
ThriftBooks® and the ThriftBooks® logo are registered trademarks of Thrift Books Global, LLC