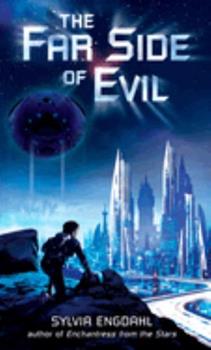 The Far Side of Evil

Newbery Honor-winning author Sylvia Louise Engdahl continues Elena's saga in this stunning companion to Enchantress from the Stars . Elana, newly graduated from the Federation Anthropological Service Academy, is sent immediately into danger on the planet Toris--a world poised on the brink of nuclear war. She is ordered to merely observe, and must not reveal her alien origin or interfere with the planet's natural course of evolution. But how can she...

Dark and not dark

Published by Thriftbooks.com User , 16 years ago
In this book, Elana is sent on a solo mission to observe a world called Toris, which is in the "critical stage". This is the stage when a sentient species has nuclear weapons, but not space colonies. THat means that they can destroy their planet, but don't have other colonies to live on if they do. If they (we; we're in the Critical Stage as I understand it) destroy their (our)planet, their species dies with it. Toris is in a cold war between two superpowers, the Neo-Statists and the Libertarians. The former have nuclear weapons. Presumably so do the latter. However, they have not even sent a satelite into orbit. Sometimes Elana would be allowed to intervene: this time, she is only an observer, and she has only two things to concern herself with: information, and staying alive. With temporary amnesia and sickness, she is placed in a hospital in the control of the controlist Neo-Statists (who beleive that "anyone who believes himself independantly wise is insane". They also beleive that people have no worth except as part of the State. I am compelled to quote a Star Trek book: "Without all the 'ones', there would be no 'many'"). The amnesia is a good alibi for not knowing much about Torisian society, so she escapes most suspician. Then she finds a menial job and an appartment, which she shares with a young woman named Kari. Kari, it turns out, is in love with a man that Elana knows is also an "agent", a member of her Fedaration who chooses to go undercover on "Youngling" worlds. This man, Randil, is like Elana afraid for Toris, and wants to keep nuclear war from happening. Unlike her, he interferes. He gives the Neo-Statists a spaceship. Elana trys to destroy it, and is caught. That's when the "dark" part of the book starts; it's a lot of sceens between Elana and a torturer. Elana is a very strong character; she doesn't hate him. He thinks she's a Libertarian agent; she finds that immensly funny. Actually, it's told in first person, as though she is in the prison, recounting the story of how she got there. When she runs out of "past" story, Elana goes on to describe how she and Kari convince Randil to destroy the ship himself. Each character is well-defined and interesting. Elana doesn't describe appearances, which may bother some people. I don't mind it. There are only a few characters with important roles: Elana, Kari, Randil, and Commander Feric, the torturer who is as close to a villain as there is. If anyone but Elana were telling hte story he WOULD be the villain, but Elana just says that he's wrong. In just about everything. He never understood that Elana would never give in, because more was at stake (that world) than he could destroy to coerce her. I was very satisfied with his fate. Randil is a positive character, even though he causes a lot of the trouble in the book. He is a bit naive, and he has less experiance than Elana. (He applies the similarity between the growth fo a species and the growth of a person too literally. Planet

the case for the stars

Published by Thriftbooks.com User , 17 years ago
Fiction doesn't have to be profound, just entertaining. But every once in a long while, a novel comes along that is both. Here, Sylvia Engdahl presents her "Critical Stage" argument for space exploration -- to wit, if we do not get out into space now, much further and longer than we have heretofore, then we may never get the opportunity again. As an advocate of space exploration and human life in the cosmos, I have explored this theme in my own non-fiction writings, noting how many cultures invented many things, only to see them languish (the Aztecs invented the wheel, to give but one example -- but they confined its use to just the toys of children). Engdahl had developed this idea years earlier, in The Far Side of Evil, but with all the tender flourishes and haunting interludes and personal verve of science fiction at its very best. The heroine, Elana (last seen in Enchantress from the Stars) is not very old. But the challenges she encounters echo from the very beginning to the ends of time, and speak to the very place of humanity in the universe, and what we need to do to attain and claim it. In age in which terrorism has threatened our ways of life in unexpected ways, Engdahl's probing story, and the recommendation it contains, are especially relevant. Originally published some three decades ago, this new edition, revised by the author's deft hand, is even better.

Published by Thriftbooks.com User , 21 years ago
Ms. Engdahl's works are the rare sort that broaden or change philosophical mindsets while being great stories with characters the reader never forgets. That any of her works are out of print is a mystery. Whenever I have loaned anyone her books, they have devoured them in one sitting and begged for more. The Far Side of Evil is a realistic depiction of the emotions involved in individuals living in a world divided by ideology. The writing is a masterpiece of human psychology. More than that, it offers hope of a sane future for humanity presented with calm rationality and certainty. And even more than that, you can't help but laugh and cry with Elana, and feel, as she does, empathy for those whose emotions have pulled them in destructive ways yet who are not bad people, just mistaken. The people of Elana's world view compassion as a strength, unlike our still Youngling world with its emphasis on the hard exterior which is only an appearance of strength. I read this book for the first time when I was 12, and I still check it out from the library. My son read it and loved it as much as I do (though the Children of the Stars trilogy is his favorite)If only the publishers would sit up and take notice and reprint this book!

The far side of evil

Published by Thriftbooks.com User , 21 years ago
I read this book when it first was published, and recentlyfound it again when moving and going through books. Even thirty yearslater, it is still fresh, and gives a vivid picture of totalitarian society as seen by an outsider. The moral and ethical issues are interwoven with a touch of Sci Fi. It might be classified as 'young adult' but this adult enjoyed it once again!

Published by Thriftbooks.com User , 22 years ago
This is a wonderful sequel to 'Enchantress from the Stars', telling about the further adventuers of Elena. As good as the first book. But please, why isn't it in print?
Copyright © 2022 Thriftbooks.com Terms of Use | Privacy Policy | Do Not Sell My Personal Information | Accessibility Statement
ThriftBooks® and the ThriftBooks® logo are registered trademarks of Thrift Books Global, LLC