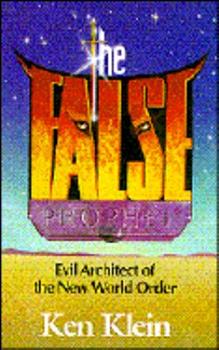 The False Prophet: Evil Architect of the New World Order

As the world plummets toward the end of the century the momentum of historic global change is obvious. The world is nearing a climactic crescendo ushering in the new millenium. What or Who is behind the scene pulling all the strings?

Published by Thriftbooks.com User , 13 years ago
Update to Ken's previous book "False Prophet". Both are execellent reads and I highly recommend.

Published by Thriftbooks.com User , 19 years ago
The author does an excellent job of tying together biblical prophecy and secular history. The history of globalism and world banking is absent in all the history text books that I have read. While it requires faith to believe the biblical references, the conspiracy and control of the world bankers is laid bare in this book. The reference notes are impeccable. I gained peace of mind when I recognized that I cannot defeat this coming "One World Government"; but, God can defeat it.

Why didn't somebody else think of this?!

Published by Thriftbooks.com User , 20 years ago
Klein takes an interesting look at the interpretation of the beasts in the book of The Revelation. In my many years of studying interpretations of the Bible prophecies, Klein seems to have stumbled upon something that no one else has thought of. Really.I would have to imagine that the position that Klein has taken from his exhaustive study of world history and current events is one that would leave him unpopular in the present escatological evangelical climate. It is vogue to imagine that the "Christian" country that we live in has historically been the good guy. Not to say that we are thoroughly evil, but Klein puts forth an angle on world history that sees us as not the benevolent caretaker that we like to imagine ourselves, but as a tool in the hands of power brokers with sinister motives and selfish intent. He also effectively shows how spiritual dark forces have been active since the beginning of time to bring about a political and economic system that these forces can control and how we have unwittingly played into their hands.If you've ever imagined that there is something wrong behind what meets the eye regarding who and what we are as a nation, I encourage you to take a good look at what Klein has thoroughly investigated and see what you think.
Trustpilot
Copyright © 2022 Thriftbooks.com Terms of Use | Privacy Policy | Do Not Sell My Personal Information | Accessibility Statement
ThriftBooks® and the ThriftBooks® logo are registered trademarks of Thrift Books Global, LLC