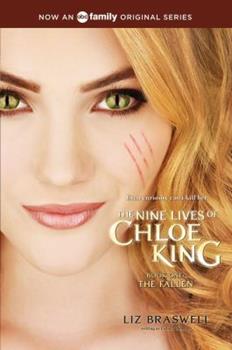 (Book #1 in the The Nine Lives of Chloe King Series)

Chloe King is a normal girl. She goes to class (most of the time), fights with her mom, and crushes on a boy...or two. But around her sixteenth birthday, Chloe finds that perhaps she isn't so normal after all. There's the heightened night vision, the super fast reflexes - oh, and the claws. As she discovers who she is - and where she comes from - it is clear she is not alone. And someone is trying to get her. Chloe has nine lives. But will nine be...

Published by Thriftbooks.com User , 14 years ago
I disagree with the lady who wrote the review. This book is definitely a page turner. Also it's wonderful because it's great to reread (I've read it 3/4/5 times). The second and third books are also great with wonderfully twisty plots :)!!! The one downside is that there isn't a fourth one yet. (every time I remember that I sigh :( How sad!) Overall the nine lives books are definitely 5 star worthy!!!

Published by Thriftbooks.com User , 17 years ago
This book was really good. I had read three pages in the daughters of the moon and i knew that it was a must have and i was right. Chloe king dies on her sixteenth birthday after falling from the tower. Her friends start dating and she's alone, and is flirting with a bunch of guys. One which saves her at the end, and one which is her enemy. (hope i didn't say to much) But this book was really good, and you should get it!

Published by Thriftbooks.com User , 17 years ago
I DIDN`T EXPECT TO ACTUALLY LIKE IT, BUT SO MANY PEOPLE HAD SAID IT WAS GOOD, SO I THOUGHT, OK, I`LL TRY IT. IT ISN`T THE TYPE OF BOOK I USUALLY READ, BUT I COULDN`T PUT IT DOWN. IT`S ABOUT A 16 YEAR OLD GIRL WHOSE TWO BEST FRIENDS START DATING SHORTLY AFTER FALLING 200 FEET FROM COIT TOWER AND SURVIVING. SHE STARTS TO FEEL NEGLECTED. THEN HER LIFE STARTS CHANGING DRAMTICALLY. SHE GETS A NOTE THREATNING HER LIFE SIGNED "A FRIEND". SHE HAS A STALKER, AND GUYS START LIKING HER. PLUS THE FACT THAT SHE HAS CLAWS, AND THE SUDDEN ABILITY TO RUN, JUMP, AND FIGHT. I CAN`T WAIT TO READ THE NEXT ONE!

Published by Thriftbooks.com User , 17 years ago
Sixteen-year-old Chloe King wasn't expecting anything bad to happen to her on that fateful day. After all, she was smart. Did her homework, got good grades, avoided her Mother, you know, usual teen stuff. But that day she just wanted to have some fun and let loose with her two best friends, Amy and Paul. She deserved that, seeing as how no one was really doing anything special for her Sweet Sixteen. So the three of them headed to Coit Tower, San Francisco's highest tower. So she was a little out of it, they all were. But not all of them fell, only Chloe did. She fell the full 200 feet. She should be dead. But she isn't. She lived to tell about it. But now things are weird. Guys are suddenly prowling around Chloe non-stop, when before it was like she wasn't even there. And that's not all. Chloe is growing claws. You know, like the claws that a cat has. And someone's trying to kill her. Good thing for Chloe, she's still carrying eight lives around in her pocket.THE FALLEN, which is Volume one in the NINE LIVES OF CHLOE KING series is a welcome addition to the teen fiction genre. Chloe is a cool character, who pretty much has a full-on personality change once she experiences her fall from Coit Tower, but that's not a bad thing. Amy and Paul, Chloe's best friends are fantastic supporting characters, and make the story that much better, by putting some minor difficulties in Chloe's already crazy life. Cat lovers, as well as fans of Francine Pascal's FEARLESS series will find themselves flocking to Celia Thomson's THE NINE LIVES OF CHLOE KING, seeing as each character possesses a strange ability, but has to deal with it on top of their normal teenage problems. A must have book, as it takes you on a crazy, yet exhilirating thrill ride from the first page to the last.Erika Sorocco

Published by Thriftbooks.com User , 17 years ago
Whoa! This was a GREAT book! I really liked this book alot. I won't give it away but it is one of the best books I have ever read. Brian and Alyec sound soooo hot too! But Im leaning on Alyec..! I can't wait till the next one comes out :)
Copyright © 2022 Thriftbooks.com Terms of Use | Privacy Policy | Do Not Sell My Personal Information | Accessibility Statement
ThriftBooks® and the ThriftBooks® logo are registered trademarks of Thrift Books Global, LLC