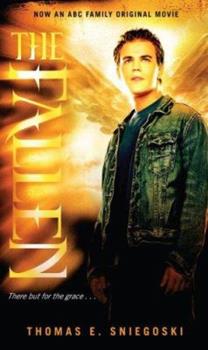 (Book #1 in the The Fallen Original Numbering Series)

Aaron Corbet isn't a bad kid -- he's just a little different.On the eve of his eighteenth birthday, Aaron dreams of a darkly violent landscape. He can hear the sounds of weapons clanging, the screams of the stricken, and another sound he cannot quite decipher. But gazing upward at the sky, he suddenly understands. It is the sound of great wings, angels' wings, beating the air unmercifully as hundreds of armored warriors descend on the battlefield.Orphaned...

Getting a little old to be reading Harry Potter?

Published by Thriftbooks.com User , 17 years ago
No? Me neither. The Harry Potter series can be read and enjoyed by folks of all ages. However, if your "Young Adults" don't realize this and being seen with the most recent Rowling could put their social status in jeopardy, pick up a few "Fallen" novels. You, and they, will be glad you did. A long time comic book author and interpreter of other people's properties (Buffy and Angel), Sniegoski launches his own world with the release of "The Fallen", the first in a hopefully extensive library of genre novels.This book is geared toward the young teen crowd, but there's no Sweet Valley High or Nancy Drew here. The Fallen is a light but very interesting story solidly rooted in a variety of complex theologies. Comic fans may recognize bits of Garth Ennis' Preacher and cinemaphiles will undoubtedly compare this to Christopher Walken's Prophecy films, but the similarities run only on the surface. In Aaron, Sniegoski has created a perfect teenaged everyman. Who among us hasn't felt alone and different even when surrounded by people who love us? When approaching high school graduation didn't everyone feel like we were about to step off a cliff in the dark? It was a great big world we were about to be thrust out into. Why not take the time in everyone's life when they are the most unsure of themselves and add a little psychological drama and supernatural intrigue?Being a tad older than this book's target audience I really appreciated seeing a very interesting interpretation of what could have been a simple rehashing of a tired plot. Younger folks will undoubtedly come to the experience with a fresher perspective and possibly enjoy it even more than I did. Like the properties Tom has worked on before, the excellence is in the execution. There was nothing new or groundbreaking in Buffy or Angel other than the interesting spins placed on the old stories by a team of very talented writers, directors and actors. Here we get all that innovation in another old story by another very talented individual.If Sniegoski can continue the high level of creativity in future volumes we will undoubtedly see another great series for the young adult audience.

Published by Thriftbooks.com User , 18 years ago
I'm not an easy person to please when it comes to books. There are many fantasy books that I have started to read and put down because both the hero and the villain were too cliché and predictable or because the descriptions didn't meet my expectations. When I picked up Fallen for the first time, I didn't expect it to be the series that I'd be counting the days till the next book is published, but it was just that.The characters are very well developed and evolve in unexpected ways throughout the story. Aaron, the protagonist, grows as he learns to understand and control his angelic nature.My personal favorite, former Powers leader, Camael shows great determination to end the violence and help Aaron on the path of his destiny. Gabriel, the Labrador retriever, is the much-needed comedy relief, but his loyalty is second to none. The villain, Verchiel, differs from the classical "Big Evil" of books because he believes that what he's doing is really the will of God. His determination makes him a very powerful character.I think Fallen also sends a message of hope. The hope that all of us can be forgiven and can redeem ourselves. After all, don't we all want to forgiveness for something?

Published by Thriftbooks.com User , 18 years ago
On turning 18 Aaron Corbert, orphaned since birth, realises that he is different, some might even say special. His world is turned upside down over night as his true nature is revealed, along with the destiny he never asked for - that will endanger the ones he loves.I loved this book. It's 'unputdownable,' a compelling read. It's got fantasy, fighting, romance, humour and horrors, along with a whole lot more.The Characterisation is awesome - I mean, who would have thought you could characterise a dog? - Yes, I did just say dog.It's full of suspense and an ending that will have you yearning for more.A must read! But don't just listen to me, see for yourself.

Published by Thriftbooks.com User , 18 years ago
Wow, I mean, man, WOW! What a great book. This book is really really good. I read it in 2 hours. So one of a kind. I can't wait for the next one in the series to come out. In case you want to know what it's about I'm going to write what's on the back of the book.Aaron Corbert isn't a bad kid-he's just a little different. archangelOn the eve of his eighteenth birthday, Aaron dreams of adarkly violent landscape. He can hear the sounds of weaponsclanging, the screams of the stricken, and another sound hecannot quite decipher. But gazing upward at the sky, hesuddenly understands. It is the sound of great wings, angels'wings, beating the air unmercifully as hundreds of armored warriors desend on the battlefield.Orphaned since birth, Aaron is suddenly discoveringnewfound-and sometimes supernatural-talents. But notuntill he is approached by two men does he learn the truthabout his own destiny, and his role as a liaison betweenangels, mortals, and Powers both good and evil, some of whom are hell-bent on his own destruction....I highly recomand this book. I would have given it 10 or more stars if I could. Well hope you like it as much as I did.
Copyright © 2020 Thriftbooks.com Terms of Use | Privacy Policy | Do Not Sell My Personal Information | Accessibility Statement
ThriftBooks® and the ThriftBooks® logo are registered trademarks of Thrift Books Global, LLC