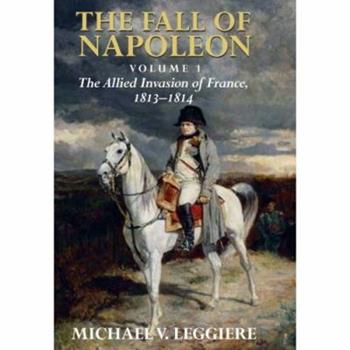 The Fall of Napoleon

This book tells the story of the invasion of France at the twilight of Napoleon's empire. With more than a million men under arms throughout central Europe, Coalition forces poured over the Rhine River to invade France between late November 1813 and early January 1814. Three principal army groups drove across the great German landmark, smashing the exhausted French forces that attempted to defend the eastern frontier. In less than a month, French...

Detailed and comprehensive but not for the casual reader

Published by Thriftbooks.com User , 12 years ago
As another reviewer indicated, this book is well researched, and examines the 1813-14 campaign in detail, down to the level of actions involving sometimes no more than a few hundred or even scores of troops. That very detail makes this not a good choice for readers who simply want a general overview of this campaign. Likewise, I would not recommend this if you are looking for exciting accounts of battlefield drama. As the author states in the preface, this is "top-down" history written from the point of view of the commanders. That makes for rather dry reading at times, as when the author recites, one by one, which units were led by which commanders, in which sectors, etc. I frankly skimmed through some of the details about various units because I figured that I'd never remember them all anyway, and I was still able to see the forest without examining each individual tree. But if you've got a head for detail you can certainly get your fill of it here. Either way, if you want a better understanding of this relatively neglected aspect of the Napoleonic wars, this book will do it for you. In addition to a recitation of the events themselves, the author also discusses the motivations of and difficulties faced by the individual commanders, and his assessments generally seem fair and sound. He also does a good job of explaining how political considerations affected military operations, especially on the Allied side. The book would've benefited from more careful proofreading. I wouldn't call the typos and grammatical errors frequent, but they do pop up with some regularity. The maps are reasonably good and certainly necessary given the broad area in which the events took place and the numerous units involved. As you can see from the table of contents, the book is arranged geographically, with each chapter discussing what took place in a given sector during a discrete period of time as the invasion progressed. That's probably the best approach the author could've taken, as it conforms more or less to the way in which the supreme commanders on both sides handled the campaign, but just bear in mind that this is not a seamless chronological narrative of the campaign. As with the "top down" approach and the minute detail, that's not intended as a criticism, just a disclaimer. The author set out to write a comprehensive, commander's-eye view of the invasion of France, and I'd say he succeeded. If you put the time into it you will have a solid understanding of the military events between Leipzig and the Protocols of Langres (not Napoleon's abdication - this is volume I, remember). But if you like your military history to be more of the actionpacked, page-turner variety, look elsewhere.

A Important Study of the Time from after Napoleon's Defeat at Leipzig October 1813 through January,

Published by Thriftbooks.com User , 12 years ago
This is a heavy and important tome covering the operations in Germany, Holland, Belgium, Switzerland and Eastern France from both the Allied and French sides for the crucial four month period following the Battle of the Nations at Leipzig in October, 1813 to the end of January, 1814, when the Allied armies reached the plateau of Langres. From that point, all roads led to Paris, and the Allied armies had forced their way through the French border defenses and most of the traditionally difficult terrain. The author presents the invasion of France from the issuing of the Frankfurt Proposals by the Allies (Austria, Prussia, Russia & Britain) wherein Napoleon's France would be reduced to its natural boundaries -- proposals that Napoleon unwisely rejected. The Allies then began conducting a coalition campaign under the overall command of the Austrian Schwarzenberg, but heavily influenced by Gneisenau, the Prussian Chief of Staff and Alexander, the Tsar of Russia. The work presents the campaign in its military aspects, but equally importantly with all its diplomatic maneuvering and conflicts. From the French side the author presents Napoleon's actions (mostly in Paris), and the separate frontier comands of Marshals Victor, MacDonald and Marmont and their dificulties in delaying the advance of the overwhelmingly numerically superior allied forces. Looking at a map and considering the relative sizes of the opposing forces, it is difficult to understand why the Allies couldn't march into Paris in a six-weeks campaign after Leipzig. The author clearly demonstrates why that wasn't possible. The discussions among the leaders of the various allied contingents concerning the proper strategy and movements in the campaign took over a month, and this was a critical month needed by Napoleon to rebuild his forces. In the event, Schwarzenberg led the main army across the Rhine at Basel, Switzerland, and invaded Alsace and Lorraine confronting Victor, the Prussian Bluecher crossed the middle Rhine at several places from Mannheim to Kaub against Marmont, and in Holland a third force of Russians and Prussians under Buelow and Benckendorff fought their way into Arnhem, then to Grave and into Belgium against MacDonald. All of these campaigns are presented in detail from both sides, perhaps even in a little too much detail for the casual reader, as the narrative goes down into the capture of fortresses defended by a few hundred men and skirmishes by even fewer. Nonetheless, if the reader is able to maintain his balance and a good overview of the situation, this book provides a wealth of information the reader can use to good effect. One is carried along, for example, in a discussion of Victor's state of mind while attempting to save those troops under his command for future battles while responding to Napoleon's demands and orders that were impossible to fulfill or execute. The author includes copies of some of the critical communications in

A Weakness is a Strength over-used

Published by Thriftbooks.com User , 13 years ago
Immediately after Napoleon's "Fatal March to Moscow", it is already destined that the once powerful, almighty Emperor and General has started its decline. As like anything else in life, what goes up will come down, and when something has enjoyed too much success and power, the flip-side is failure and weaknesses. Napoleon's over-confidence, his age, his health, his inertia, his lack of focus, etc and all contributing factors to a "Perfect Storm" that causes him to loose his entire Empire! A good read. Steven Lim (RSTN) - Singapore.
Copyright © 2020 Thriftbooks.com Terms of Use | Privacy Policy | Do Not Sell My Personal Information | Accessibility Statement
ThriftBooks® and the ThriftBooks® logo are registered trademarks of Thrift Books Global, LLC