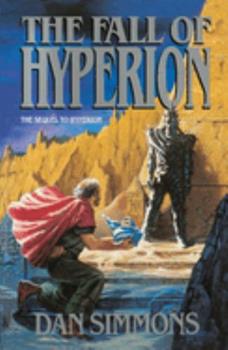 The Fall of Hyperion

(Book #2 in the Hyperion Cantos Series)

"State of the art science fiction . . . a landmark novel."-- Isaac Asimov's Science Fiction Magazine Now, in the stunning continuation of the epic adventure begun in Hyperion , Simmons returns us to a far future resplendent with drama and invention. On the world of Hyperion, the mysterious Time Tombs are opening. And the secrets they contain mean that nothing--nothing anywhere in the universe--will ever be the same. Praise for The Fall of Hyperion...

Not as good as Hyperion, and a massive letdown.

Published by K. , 3 years ago
Hyperion was a masterpiece and I was beyond excited to read the sequel. However, two chapters in I realized The Fall of Hyperion lacked nearly all the charm and brilliance of Hyperion. This book is a serviceable stand-alone sci-fi tale, but following such a brilliant masterpiece such as Hyperion, it just seems weak and unimportant. I’m struggling to finish it and I will not be reading Endymion. This book was a massive letdown.

Published by Thriftbooks.com User , 17 years ago
Dan Simmons' The Fall of Hyperion is the sequel to his Hugo-winning novel Hyperion, a grand masterpiece in its own right. However, The Fall of Hyperion is where the story is truly realized, explored, and concluded. The destinies of the Shrike pilgrims are told with stunning skill and moving ability, and the epic story of the Hegemony wars finally plays out. Of course, you should not pick up this novel without first reading Hyperion. But you should buy this with Hyperion--the original novel ends with an absolutely terrible cliffhanger. The Fall of Hyperion is told with all the deep human emotion and brilliant prose of the original novel, and I am surprised that it too did not receive the Hugo award. Granted, there are still the slow philosophical parts, and much space is devoted to the discussion of the nature of God and gods and the relationship of humankind to their deities. Personally, I found it fascinating, and it doesn't detract from the story in the least. For cutting-edge, gripping science fiction, finish off the Hyperion set with The Fall of Hyperion. Dan Simmons is once again at his best in this novel, and you won't be disappointed.

Intrigue at a grand scale!

Published by Thriftbooks.com User , 18 years ago
After reading this book I understood that the stories of the pilgrims of the first part, "Hyperion", work as a clever device to reveal to the reader the magnificent and intriguing universe that Simmons has created for this series. If you finishedthe first book with a feeling of disconnection between the stories, like I did, this is the part where all is blended together. The different patches are stitched together and the whole plot is laid before your eyes in all its complexity.The scope of the story suddenly expands and it deals now with nothing less than the surviving of the human race. Difficult decisions affecting the destinies of entire worlds have to be made by leaders on the basis of insufficient and unreliable information. War rages. What is the role of the planet Hyperion and the shrike on this grand scale drama? Who can you trust?The story offers some very interesting and not so obvious twists at the end. It has a sense of closure, but not all the issues are resolved. Actually, I think that the main issue is merely postponed to a time deep in the future of which we are offered only glimpses.At times the story is difficult to follow because the pilgrims are split. Then we follow one of them for a while, and whensomething extremely important seems to be about to happen... we shift to another pilgrim or subplot and start accumulating tension again. This format has the advantage, though, that it adds some suspense, and I liked it.I assume that if you are considering reading this book is because you have read the first one. Go ahead! It will answer some of the many questions you must have. In case you have not read the first part, I do not think this second part is a stand-alone book; you need the background of "Hyperion".

Epic Sci-Fi at Its Best

Published by Thriftbooks.com User , 20 years ago
This second installment (not an actual sequel) of Simmons' incredible Hyperion saga is every bit as engaging at Hyperion, completes the tale of the Hyperion Pilgrims in a powerful, complex and shattering conclusion. Simmons writing style is excellent for this type of story, he peppers you with the right amount of details that fully immerse you in his world and continues to amaze, delight, evoke sorrow and joy in the best of ways. His literary references are spellbinding for a sci-fi story and he's inventive beyond belief. If only George Lucas was this good.I felt sad when the story ended, because I got so attached to the people, places and events and at the time the next set of book wasn't yet published. However, now Simmons did revisit the world of the Shrike with Endymion and the story can continue. Who says you can't return home again?

The First Book Set 'Em Up

Published by Thriftbooks.com User , 22 years ago
And this book knocks 'em over. I love reading stories in which "everything you know is wrong". Simmons takes the characters and events recounted in "Hyperion" and swallows them whole in a tale that had me scraping my brains off the back wall. The introduction of M. Severn and Meina Gladstone makes for two of the more fascinating and deep characters I think I've ever read. The former is a cipher, reflecting the events taking place hundreds of light-years away (those of "Hyperion") and interpreting them through a dead poet's thoughts. The other is a master politician, leader of a Hegemony that encompasses more billions of souls than almost is comprehensible. The sacrifices they both make to save themselves save humanity itself, but at a terrible price.Some sections of the book are slow (I found the myriad battles with the Shrike tedious) the majority of the tale is fast moving, incredibly rich and believable, and astounding in its plot and details. This book and its predecessor are simply two of the finest works of literature in any genre, and are utterly entertaining.I've handed copies of the "Hyperion" books over to probably 20 friends over the last 8-9 years, and had never had any of them returned to me. I don't care ... these books are *that* good.

Published by Thriftbooks.com User , 23 years ago
I'm somewhat surprised by some of the reviews for the Hyperion series, especially the latter two, Endymion and Rise of Endymion. I agree that Hyperion and Fall of Hyperion are the /slightly/ stronger of the four, but again they are the foundational works which support the rest of the series, which branches off into a more ornate, but steadfast, structure. Looking at the structure of the Hyperion saga as a whole, both as science fiction and as literary fiction, few stories come close to matching the width and depth of Simmon's conceptualization of the future.Sci-fi ornamentation aside, much of the saga's strength lies in it's most literary qualities. The plot is epic and the characters are depthful and realistic, but Simmons raises the bar a notch above the average space opera's best, weaving a rich tapestry of allusion and parallelism that would challenge literary fiction's finest offerings. Stylistically, Simmons writes with detailed clarity and a dry sense of humor that underpins every book in this series. While the story may bog at times during the particular verbose descriptions of the latter stories, the pacing is never derailed. Necessarily with any work of fiction, there are miniscule lapses of continuity and logicality. (What /did/ happen to Leigh Hunt?) But I would argue that these nits are so glaring only because the whole of the series is so well-implemented. To remain quotable, the saga is a spectacular tour-de-force, breathtaking in scope with heart-touching characters. Please read these books.
Trustpilot
Copyright © 2022 Thriftbooks.com Terms of Use | Privacy Policy | Do Not Sell or Share My Personal Information | Accessibility Statement
ThriftBooks® and the ThriftBooks® logo are registered trademarks of Thrift Books Global, LLC