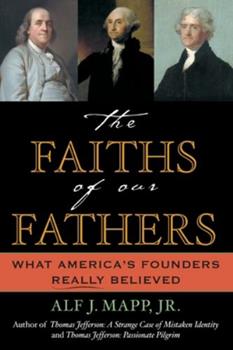 The Faiths of Our Fathers: What America's Founders Really Believed

This description may be from another edition of this product. Throughout our nation's history, the religious beliefs of America's founders have been contested and misunderstood. Did our founders advocate Christianity or atheism? In The Faiths of Our Fathers,...

will not please the evangelicals

Published by Thriftbooks.com User , 16 years ago
This book presents an excellent look at the extent to which faith played a role in the lives, beliefs and actions of eleven of our founding fathers. The author appears to have no preconceived notions concerning the faith of these men, nor does he attempt to persuade the reader that any religion or single faith was necessary at all. Indeed, the title speaks for itself in that it is "Faiths" plural. The beliefs of these men varied widely as did the extent to which they exercised their faiths. Having read numerous, lengthy biographies of our founding fathers, I found this book to be factually consistent with what others have researched and written -- and best of all it is set forth in a concise, easy to read manner that permits the reader to consider the evidence and reach his or her own decision concerning the founders faiths and how, if at all, their faiths influenced the founding of our nation.

The Faiths of Our Fathers

Published by Thriftbooks.com User , 17 years ago
Faiths of Our Fathers is easy to understand and helps bring history to life. Each chapter gives the reader a chance to learn some of the differences in the religious beliefs of America's founding fathers. In the light of current events the subject is a timely one.
Copyright © 2020 Thriftbooks.com Terms of Use | Privacy Policy | Do Not Sell My Personal Information | Accessibility Statement
ThriftBooks® and the ThriftBooks® logo are registered trademarks of Thrift Books Global, LLC