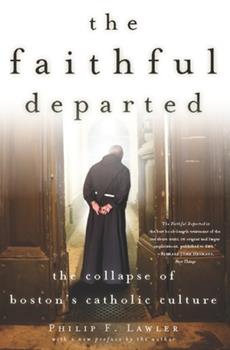 The Faithful Departed: The Collapse of Boston's Catholic Culture

The Faithful Departed traces the rise and fall of the Catholic Church as a cultural dynamo in Boston, showing how the Massachusetts experience set a pattern that has echoed throughout the United States as religious institutions have lost social influence in the face of rising secularization. The collapse of Catholicism in Boston became painfully apparent in 2002, with the full explosion of the sex-abuse crisis. But Lawler brings an insider's knowledge...

Published by Thriftbooks.com User , 14 years ago
I almost hesitate to recommend this book, since reading it was like tearing open a psychic scab. Still, I think that anyone who cares about the Catholic Church should acquire and read this, what I can only characterize as a masterpiece. It is not simply a re-encapsulation of the scandal that broke in 2002-2003. Rather, it is an incisive history and analysis of the culture American Catholic Church entire, focused on the Arch Diocese of Boston as an archetypal case study. Lawler's essential thesis is that the pedophilia scandals that are now scourging the Church are only symptoms of a deeper malaise, one that is rooted in the "suburbanization" of Catholic culture, and it's loss of focus. Instead of of hewing to her ancient prophetic charism, her essential mission of evangelizing and sanctifying, the Church has lost its way. And this didn't happen suddenly in 1968 or 2002. The tepidity and mediocrity began seeping in long ago, back when the Irish, Italian, French and German immigrants first began arriving here, and began attempting to fit into the American milieu. It's now reached the point that most American Catholics - to include most of our bishops and priests - now conceive of the Church as primarily a political and civic association, rather than a mystical entity with radical and essential moral & spiritual claims on us all. There is a distinct lack of urgency, and a tendency to relativize and abdicate all accountability when it comes to any difficult aspect of the Faith. Most notoriously, that of course means any teachings involving sexuality or gender, but even issues related to violence and economics are fudged away. It's all go along to get along, and what many refer to as "cafeteria Catholicism" is now firmly ensconced as the order of the day. The recent scandals only rip the lid off the sepulcher. They only reveal who we, who our shepherds, have become. How compromised we all are. For even if only two thirds of our bishops have colluded to protect the 2 or 3% priests proven guilty of gross criminal sexual malfeasance (to the point of often engaging in what amounts to criminal conspiracy) they are only representative of most of the rest of us. Creatures of our culture of materialistic excess and sexual decadence. So the bishops cannot hold themselves accountable. But neither, apparently, can we. Re-reading Cardinal Law's correspondence with serial rapists such as Fathers Geoghan and Shanley is heart wrenching and soul numbing stuff. But nevertheless, I think it is salutary. The bishops may have indeed "gotten away with it." Many of the most derelict ones (such as Roger Cardinal Mahoney) still hold their positions. Despite their irresponsibility. Despite all the scandal and bankruptcy, moral and otherwise. Most of them have kept their "jobs," while holding the vast majority of innocent priests and engaged laity "accountable" with all their invasive background checks and sex ed programs. With this

Published by Thriftbooks.com User , 14 years ago
This book is essential reading for anyone -- Catholic or non-Catholic -- who wants to understand better the root of the sex-abuse crisis and the current state of the Catholic Church in the United States. In a clear and extremely readable way, Mr. Lawler shows how the entire hierarchy of the American Church -- from the bishops on down -- let down the faithful. If Boston is viewed as the epicenter of the abuse crisis, it also can be seen as the archetype for the decline in the Catholic Church's influence in the U.S. and many other parts of the world. Mr. Lawler ties this together better than anyone else.

Published by Thriftbooks.com User , 14 years ago
Philip Lawler has written a history of my life in the Boston church since 1941. I suppose many of the "faithful" were naive and had no idea of the political tensions over the years, but we did see the destruction of our places of worship in the "spirit of Vatican II" and the wholesale repudiation of Catholic piety and devotion valid for centuries. The 60's and 70's popular culture invaded seminaries and changed the thinking of church leaders. The sense of the sacred departed and capitulation to politically correct attitudes robbed the bishops of their moral leadership. The consequences were empty churches and a thundering stampede from convents, monastaries and the priesthood. This book is essentially a damning condemnation of the US cardinals, archbishops and bishops. The confusion and lack of leadership created the climate for defying moral authority, indifference to church pronouncements on divorce, contraception, and other moral issues set the stage for the sordid child abuse scandal. The covering up of scandal was the only motive and we all suffered immeasurably. In a way, we in Boston are going through purgatory at the present time. Mr. Lawler is optimistic that the church will overcome this, and I am too. The gates of Hell shall not prevail.

A sobering look at the Church in America

Published by Thriftbooks.com User , 14 years ago
This book's title claims that the book is about the history of the church in Boston but it is really about the Church in America as well. It tells this history with a mixture of facts, fascinating stories, funny anecdotes and sometimes alarming statistics. It details closely how the Church intersected with politics in Massachusetts but also in the country as a whole. Lawler shows how the Kennedys influenced Catholic political thought and how their carefully constructed views and the lack of response from bishops helped shape the political landscape. His book also touches on the "reforms" supposedly instituted by Vatican II, the liberal ideology of universities, feminism, woman priests, contraceptives, homosexuality within the priesthood, Roe v. Wade, stem cell research, gay marriage and abortion. It goes on to demonstrate the influence of the media, particularly the Boston Globe, and how it has replaced a position held a couple of generations ago by the archbishop. It even helps explain one seeming paradox that has always puzzled me, namely why is Massachusetts both the most Catholic and most liberal state in the union? But the principle focus is on how a combination of silence and political posturing by bishops in this country has lead to the crisis in the Church of the evaporation of the Catholic faithful and the sexual abuse tragedy. This book sees the sex abuse scandal as a horrible symptom of the failure of Catholic bishops that were more interested in the earthly institution of the church than in living its faith and protecting that faith within their flocks. None of it makes particularly cheerful reading for a Catholic, but it is definitely both fascinating and instructive. What is truly amazing is that it does this all from a position of strong love for the Catholic Church and an unquestionable orthodoxy to Catholic teaching and tradition. It also avoids emotional and inflammatory statements but does not shy away from seeking truth. His book is obviously a very personal work for him because his life intersects with the story told in the book (apparently Cardinal Law hired him to edit the diocesan newspaper). It is also a quick easy read which is something that always makes me more likely to read a book! The book also contains a couple of very moving passages and thankfully it ends on a note of unquenchable hope. I would highly reccomend it.

Published by Thriftbooks.com User , 14 years ago
Many books on the scandal have been written with this simplistic narrative: evil self-hating homosexuals shielding child predators because Catholicism has incoherent and destructive doctrines on sexuality. This is not a book in this category. This is the first book to detail how this is the scandal of the bishops as much as it is of criminal priests. They failed to act to prevent these crimes against children when it was their power and responsibility to do so. Lawler not only investigates this but can answer why this happened. He also connects the dots from the wider loss of faith by Catholics, to the isolation and morale of the clergy, and the ability of the scandal to be under the radar for decades. There is so much new material here that anyone with an interest in the scandal or the state of the Catholic Church today should read this book.
Trustpilot
Copyright © 2022 Thriftbooks.com Terms of Use | Privacy Policy | Do Not Sell or Share My Personal Information | Accessibility Statement
ThriftBooks® and the ThriftBooks® logo are registered trademarks of Thrift Books Global, LLC