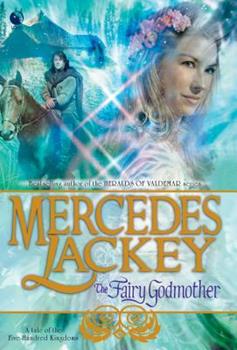 The Fairy Godmother (Tales of the Five Hundred Kingdoms, Book 1)

The Fairy Godmother by Mercedes Lackey released on Dec 25, 2003 is available now for purchase.

Published by Thriftbooks.com User , 17 years ago
this is a great book by mercedes. it is so good i couldn't put it down until it was done. she has done a great job once again. it gives you a fantasy view of all the fairy godmothers from childrens fairy tales.

Not in My Kingdom!

Published by Thriftbooks.com User , 17 years ago
Have you ever wondered where a Fairy Godmother came from? How they always managed to show up just in time to save the day? With this fantastic book Mercedes Lackey has taken me back to the delight of reading her early books, such as Oathbound or Oathbreaker. Elena Klovis should have married a prince and lived happily ever after. With the all powerful force of ?Tradition? pushing her towards?.something, she has passed her mystical 16th and 18th birthday and still no prince. At the end of her rope and ready to make life as a maid her own Fairy Godmother shows. Not to turn pumpkins into coaches or mice into men but with a proposition. Elena herself would be a Godmother and help others who Tradition had muddled with. With humor and an excellent story Mercedes Lackey has written a romance I can enjoy and place with honor amongst the favorites of my books.

Published by Thriftbooks.com User , 17 years ago
The powerful force of tradition intended Elena to be a Cinderella, except that her prince was only eleven when Elena turned twenty-one. When her evil stepmother decides to try other lands for fortune, Elena is abandoned and forced to come up with a future of her own. She decides to become a servant--and at least get paid for working for others. Instead, a Fairy Godmother takes her on as an apprentice. The magical potential that has built up in her through the frustrated tradition gives her huge magical powers. Which she'll need, because tradition forces the inhabitants of her kingdoms into preset ways--some of which are positive and nice, but others of which are quite dark and evil. Elena, even aided by brownies and unicorns, has a lot to do. When Prince Alexander behaves rudely to what he thinks is an old woman but is really Elena in test mode, she turns him into a donkey and brings him home to reform him. Which is fine as long as Alexander stays a donkey, but when he turns back into a man, attraction sizzles, which is a problem. Tradition doesn't hold with Fairy Godmothers having lovers, at least not lovers who don't betray them. And Elena is determined not to follow that tradition. Author Mercedes Lackey melds together a number of fairy tale traditions to create a compelling story of fairie, magic, and romance. Elena is a strong character, who, as her brownies point out, would be wasted in the largely decorative role of princess. Alexander starts out something of a jerk, but manages to redeem himself through hard work and serious thought. A strong action sequence closes out the story answering readers who wonder whether Elena and Alexander will be able to create a new tradition where they can explore the strong attraction between them. Mercedes Lackey's strong writing engages the reader emotionally and makes THE FAIRY GODMOTHER a compelling read. This is the launch novel in a new fantasy imprint--LUNA. LUNA will concentrate on female-driven fantasy. THE FAIRY GODMOTHER augers well for the new line.

Published by Thriftbooks.com User , 17 years ago
Not since By the Sword have I enjoyed one of Ms. Lackey's novels so thoroughly. Any fan of Mercedes Lackey, fairy tales and/or GOOD stories will enjoy this.In the Five Hundred kingdoms, 'The Tradition' rules. It is nearly an unstoppable force. If the lives of any individual in the kingdoms begins to resemble that of a fairy tale, the Tradition gathers force to bring that story to its proper fairy tale conclusion. Elena Klovis has an evil stepmother and two stepsisters, and is well on the way to becoming Cinderella. However, the prince of her kingdom is only 11 years old! Unable to fulfill her destiny, Elena ends up as a fairy godmother's apprentice. Though Elena is now outside Tradition, it is still determined that she should somehow fulfill her destiny, while Elena struggles to bring 'happliy ever afters' to other people in her kingdom with or without the Tradition's help.This novel was really, really well written. I simply couldn't put it down. Elena is charming and hardworking, sensible (but not too sensible!) and kind. Everyone in the novel was well-written, from Sergei the little horse, to Arachnia,the evil Sorceress, to Alexander the haughty prince, to the unicorns, who were cutely dopey. Everytime I thought something wouldn't be explained, it was! Everything happened satisfactorily. Watching Elena manipulate the Tradition( one of Ms. Lackey's more interesting characters, although it's not quite sentient) was very entertaining. The Tradition is like Destiny, but more obvious and immensely powerful, not to mention stubborn. It's not always a good thing, as some of the fairytales it steers people into are quite nasty. It's just a force, for good or ill. You can note the author poking fun at some of the fairytale endings, like when Elena explains that the Tradition will require a rescued princess to automatically fall in love with her rescuer, even if she's already married!Go out there and buy this book! You won't be sorry, and you'll only hope that Ms. Lackey writes more such stories.
Copyright © 2020 Thriftbooks.com Terms of Use | Privacy Policy | Do Not Sell My Personal Information | Accessibility Statement
ThriftBooks® and the ThriftBooks® logo are registered trademarks of Thrift Books Global, LLC