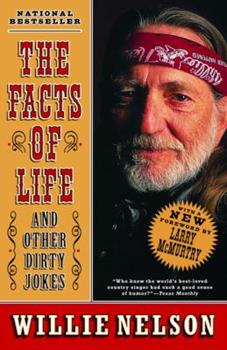 The Facts of Life: And Other Dirty Jokes

If you had to give America a voice, it's been said more than once, that voice would be Willie Nelson's. For more than fifty years, he's taken the stuff of his life--the good and the bad--and made from it a body of work that has become a permanent part of our musical heritage and kept us company through the good and the bad of our own lives. So it's fitting, and cause for celebration, that he has finally set down in his own words a book that does justice...

"If you ain't crazy,there's something wrong with you."

Published by Thriftbooks.com User , 17 years ago
If you pick up this book and thumb through it quickly,you may pass it up.If so, you'll make a big mistake. I've read Willie with Bud Shrake and Willie-Behind the Music,by Clint Richmond;both excellent books;butthis is a great update and different book by and about Willie.This book is a real fun read,especially if you've been a fan of Willie for a long time like I have.;for nearly 40 years. Reading this book is like sitting around with Willie chewing the fat. He talks directly to the reader as if you were his friend;and who wouldn't want to be one? On second thought, it is a lot easier to read and listen to Willie than trying to travel with him.Most couldn't last a week,and I must admit,me included. The style of this book would be a good pattern for others to follow.He breaks it up with experiences and jokes.After all,really Willie just enjoys life and wishes the same for everyone else;except maybe for the IRS.The abundant photos are excellent and appreciated. I particularly enjoyed Willie's comments about Ray Price,another legend,when he said: "Ray Price is the greatest country singer ever,period." That's an real tribute coming from someone of the stature of Willie.It says a lot for Ray,and even more for Willie. This book also contains a lot of Texas common sense,such as: "There must be a better way to start the day than getting up." "Hell,what's wrong with being lazy sometimes?" "It's almost April 15,don't forget o file your toenails by midnight" "Remember the early bird gets the worm,but the second mouse gets the cheese." "No good deed goes undone." Great compasses to guide you. Willie has shown he can be a great writer.If you've ever doubted how talented Willie really is,try to think of a writer who can write songs and play them like Willie does. Hope you enjoy as much as I did!

Willie's still got it.

Published by Thriftbooks.com User , 19 years ago
This book is a must for the country music fan. Willie talks about life's lesson and adds plenty of humor to it. I am glad to see Willie still on the road doing shows. I saw him when he came to Columbus to open for the Dixie Chicks, and he did a great performance (too bad he didn't get more stage time). So if you love Willie Nelson, first buy this book and then go see him in concert some where. He is one of country music's living legends!P.S. I miss you Waylon :(

A GRASS-ROOTS MAN WITH A FASCINATING STORY

Published by Thriftbooks.com User , 19 years ago
What stood out among the pages of this book was Willie's down-to-Earth, grass-roots character. He is a man who has often lived on the edge, had his fair share of ups and downs but still manages to come out on top. His songs are popular because they come from the heart, just as this book does. The further one gets into the book, the more it begins to feel as if Willie is right there along side of you, and you are just listening to an account of his trials and tribulations. He brings life to his adventures and readers will get a fair chuckle from his jokes - some of them clean, others not ones you would tell your younger children. Willie comes across as a simple man with a devil-may-care viewpoint and a unique style that is one hundred percent pure Willie. For fans of Willie Nelson, this book is one you will not want to miss.

No Disappointments in this Book!

Published by Thriftbooks.com User , 19 years ago
Willie Nelson the author ranks (in my mind) with Willie Nelson the songwriter/performer. This book is hilarious and, although may be called a memoir, offers so much more to the reader. Mr. Nelson represents the backbone of this country, and his book will not disappoint in the least. Highly recommended!

ON THE ROAD WITH THE MAN!

Published by Thriftbooks.com User , 19 years ago
If you are a fan of Willie Nelson ... as most folks are ... you'll want this book.It's spoken in town-to-town musician-bus language and it's simply what Willie intended for the book to be --- a no-holds-barred bit of chit-chat placed into print by utilizing the casual talking style of the author.Like his many musical compositions that have been released on records, CDs and cassettes during the past 40 years or so, this is a work of art by an artist who has lived the life and is, therefore, qualified to talk about it.Willie sent me the beginning pages of the manuscript as he was creating it on his bus while riding from city to city for various appearances. After reading what was submitted to me, I knew it would be a "winner". Reading the completed book was a genuine delight.Some of the jokes told by Willie are not the type you would tell to your mother (who made have already heard them if she knows Willie), but are not offensive unless your head has been buried in the sand during the past couple of decades. Like a good movie, the hilarious attachments just add to the atmosphere.While you are reading this book, you get the feeling you're sitting on Willie's smoky bus, listening to the genius as he laughs and relays numerous stories of the road, discusses some personal friends and speaks with a tongue in cheek manner about the somewhat complex music/entertainment scene. There are also some bits that are to be taken as serious statements from time to time.Although he needs no introduction to his talents as a singer, actor, extraordinary guitar picker and songwriter, it's the "common" connection that makes this an authentic piece of literary art.Willie caps it all off with many photos and lyrics for songs, most of them composed by a man who is looked upon by his many peers and countless fans as being unsurpassable in the business of entertainment.You might put Willie's new CD, "THE GREAT DIVIDE", in the player unit while you lay back and enjoy this very good book written by a dear old friend.
Copyright © 2020 Thriftbooks.com Terms of Use | Privacy Policy | Do Not Sell My Personal Information | Accessibility Statement
ThriftBooks® and the ThriftBooks® logo are registered trademarks of Thrift Books Global, LLC