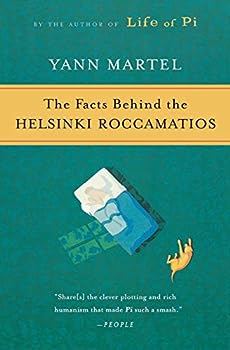 The Facts Behind the Helsinki Roccamatios

This description may be from another edition of this product. Here are four unforgettable stories by the author of Life of Pi. In the exquisite title novella, a very young man dying of AIDS joins his friend in fashioning a story of the Roccamatio family of...

Leaves Me Wanting More From This Author

Published by Thriftbooks.com User , 13 years ago
These four stories are so different it's hard to believe they were all penned by the same author. All are absorbing and memorable, however, the prize goes to the title story. I laughed and cried my way through the Facts Behind the Helsinki Roccamatios. It was worth getting the entire set for this story alone. The other 3 stories then become bonuses in a most worthwhile collection!

If you loved Life of Pi, you will enjoy this stories

Published by Thriftbooks.com User , 16 years ago
Yann Martel catapulted to fame with his extraordinary tale - The Life of Pi. In The Facts Behind the Helsinki Roccamatios Martel digs into his early works and presents us with four short stories, written before the Life of Pi. Of the four stories, the first two were for me the most memorable. The Facts Behind the Helsinki Roccamatios is a story of a young man helping his college friend as he struggles with and ultimately succumbs to AIDS. The two men meet often over several months and collaboratively create a story, whose narrative line loosely follows the major events of the 20th century, starting with 1901. The second story, The Time I Heard the Private Donald J. Rankin String Concerto with One Discordant Violin, by the American Composer John Morton, is about a man's chance encounter with the extraordinary music of an unknown composer, a Vietnam vet who works the night shift at a bank as a janitor. Both stories demonstrate Martel's skill with prose and gift as a storyteller. Martel's author's note in the beginning of the book is worth a read. In it he details his years of failed attempts at writing. I have a writer friend who once told me that in order to be a good writer, one must be willing to be a bad writer. Clearly this is what happened with Martel. Thank goodness he had parents who didn't push him into being something he wasn't, but supported him even when he wasn't producing results. Martel spent much of his early years learning and exploring, building the palette of experiences he could draw upon for his fiction. If you loved Life of Pi, you will very likely enjoy this small collection of stories.

Outside The Box And Slightly Off The Mark

Published by Thriftbooks.com User , 16 years ago
Yann Martel, author of the best-selling Life of Pi, here offers some of his earlier work--four short stories which do not exactly fit the short story mold. The first story, same name as the collection's title, is an extended meditation on dying. As the young narrator struggles with his friend's terminal illness, the two men embark on a project to pass the time and keep up their spirits. They decide to write a novel about an imaginary family--the Roccamatios of Helsinki, whose lives parallel, year by year, the years of the twentieth century. We are not told much about this novel or its characters. The writing, the research, the assembling of facts about the twentieth century, are used to highlight the illness and death of the friend. Also included are a story about a Viet Nam veteran, a talented but unrecognized composer who struggles with the meaning of life while working as a night custodian in a bank. And a composition about the night a young man is hanged (for some unnamed crime), the story told in multiple variations, over and over. The book concludes with a strange tale of an old machine that makes mirrors out of memories. And about the importance of memory itself. Author Yann Martel does not shrink from the extreme and unusual. After all, he wrote the novel about a young man in a lifeboat with a tiger, and made it almost believable. The stories in this small collection are similarly over-the-edge. They are well written, clever, almost too clever. For me the author allows his cleverness and his mastery of the language to overshadow the characters. The stories are not meant to be literally believeable, but, in the end, they are not emotionally believable either. Still, these stories are well worth reading. If you liked the Life of Pi you will love the Roccamatios as well. Reviewed by Louis N. Gruber.

Published by Thriftbooks.com User , 17 years ago
If, like me, you are awaiting author Yann Martel's next creative work after his whimsical animal allegory, "Life of Pi", then you can get a fix in the meantime with these four short stories written by the author about ten years ago. You definitely see the talent forming and consequently expect unwarranted flashes of brazenness here and there. The book's title is actually the title of the first story told in the first person. The Roccamatios are an imaginary Italian family living in Finland in the late 1980's, and their friend Paul is dying of AIDS. In order to alleviate the unrelenting grief of the situation, the narrator invents a game where he and Paul each takes turns picking one fact from each year of the twentieth century. Their characters reveal themselves piece by piece by what fact they choose. It's a creative if bit contrived two-character study, which ultimately reflects a dying wish to preserve the past and somehow immortalize Paul. The second story has the unwieldy title of "The Time I Heard the Private Donald J. Rankin String Concerto with One Discordant Violin, by the American Composer John Morton." It's about a Canadian who visits Washington, D.C., in 1989, and has a chance encounter with a Vietnam War veteran who leads an ensemble of his former comrades in arms in an abandoned theater. The music they play becomes cathartic to the visitor, and in turn, the musicians recount their wartime experiences in unexpected ways. Like one of the better episodes of Rod Serling's "Night Gallery", the story becomes a meditative examination of loneliness, lost opportunities and reaching for something that is beyond your grasp. The third story, entitled "Manners of Dying", consists of a more hackneyed premise, creative variations on a convicted criminal's last hours, including his execution. In true "Rashomon" style, each one is written in the form of a letter to the prisoner's mother from the warden of a correctional institution. In each version of his story, the main character details his last meal, whether he ate it, how much time he spent with the chaplain, what attitude he displayed in expectation of the inevitable and precisely how he died. One variation has him choking on a potato, another laughing hysterically, and so on. It's a bit like "Groundhog Day" only in this case, the prisoner ponders different aspects of his life with each variation. The last story, "The Vita Aeterna Mirror Company: Mirrors to Last Till Kingdom Come" gets its title from a strange device that an old woman has, a machine that makes mirrors and runs on memories. Structured like a play with different voices, the old woman tells her life story on the left side of the page and her grandson on the right. Like the famous "Far Side" cartoon with Ginger the dog, when the grandmother talks, all the boy hears is "blah-blah-blah". Of course, the ending is inevitable the grandson appreciating the device and then ultimately recognizing his grandmother to be a more interesting

Published by Thriftbooks.com User , 17 years ago
yann martel renowned for his booker prize winning life of pi, started off his publishing career with this colelction of short stories/novellas. the stories range from the sublime, to the sad to the silly covering a wide-ranging set of topics from death, to inspiration to music to memory. while the stories are well written they sometimes lack in ideas, however martel's steady prose and studied observations make them a fast read. while these 4 stories will make do for a quiet evening, it is interesting to read an author who is still working at mastering his craft. more novelty than genius.
Copyright © 2020 Thriftbooks.com Terms of Use | Privacy Policy | Do Not Sell My Personal Information | Accessibility Statement
ThriftBooks® and the ThriftBooks® logo are registered trademarks of Thrift Books Global, LLC