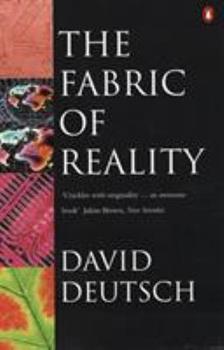 A penetrating exploration of the new physics, including time travel, quantum computers, and the multiverse - as referenced in the film "Avengers: Endgame" For David Deutsch, a young physicist of... This description may be from another edition of this product.

Published by Thriftbooks.com User , 16 years ago
The book was published in 1997, and a lot has happened since then. Yet the foundations retain their permanence, and David Deutsch's captivating writing is as fresh as ever. Despite the availability of newer books, for the layman/woman, now almost 10 years later, I would still rank this book at the top. There is a lot in the book; and yet, the ideas are presented in a clear and engaging way. The author is a pioneer, a giant in modern physics; he was and is a driving force in new discoveries in the subject. Yet he has his personal way of explaining physical reality. His view is not shared by all scientists, one should admit. However, there is agreement about the scientific conclusions. The first chapter in the book stresses *explanation*, our understanding of the reason for things. There are other views of science, e.g., instrumentalism: predicting the outcome of experiments. The author's view on quantum theory is based his idea about parallel universes. While fascination, the reader should be aware that there are alternative theories for explaining quantum phenomena. An important concept in quantum theory and quantum computation is "decoherence", and it is explained (ch 9) in terms of different (parallel) universes. In ch 9 about quantum computers, it might have been only fair to mention that there are such other current views on decoherence; but this is a minor complaint. Presentation: I love that each chapter concludes with a section on terminology and a summary. As a subject theoretical computer science started with Alan Turing and John von Neumann in the 1940ties: Classical computation follows the model of Turing,-- strings of bits, i.e., 0s and 1s; and a mathematical model which is now called the Turing machine. Instead of bits, why not two-level quantum systems, e.g., models built from electrons or photons? Such an analogues model for computation based on two-level quantum systems, and a quantum version of Turing's machine was suggested in the 1980ties by R.P. Feynman. The form it now has owes much to the author himself, David Deutsch. But it wasn't until Peter Shor's qubit-factoring algorithm in the late 1990ties (not covered in the book) that the subject really took off, and really caught the attention of the mainstream science community, and of the general public: The 'unbreakable' codes might be breakable after all ! That there is a polynomial factoring algorithm, as Shor showed, shook up the encryption community, for obvious reasons, and created headlines in the news. Ideas in the quantum realm, and not part of classical thinking, include superposition of (quantum) states, the EPR paradox (1935), and (quantum) coherence. Although these concepts are at the foundation of quantum theory, they make a drastic change in our whole theoretical framework of computation: Now one passes from the familiar classical notion of bit-registers to that of qubit-registers, and the laws of quantum mechanics take over. Math

A must read for thinking people

Published by Thriftbooks.com User , 21 years ago
When I ordered The Fabric of Reality, I was hoping I would receive a book something like Quantum Computing for Dummies. While this book does not explain the nuts-and-bolts of programming quantum computers, it is nevertheless an eminently practical guide for problem solving in general, and is curiously comforting in the process in that it rationally confirms our deepest intuitions held from childhood. It also reveals much about the `sociological' aspects of doing science, from the egalitarian mode of the symposia, to the political elitism of much of the rest of it. This book (while yet coy) does not ultimately shy away from the dirty-little-secrets of scientific methodology. I heartily endorse The Fabric of Reality as `a must read' for anyone embarking on a career of thinking.Having read this book, I feel I am now prepared to ace my Philosophical Implications of Science class exams (but alas, I am fifteen years too late). Deutsch takes us from realms of pedestrian problem solving up the heights of the Eiffel tower where we survey the breadth of the terrain of scientific problem solving and we learn that the two modes are the same. All of the principal players that were there in my philosophical science class are here again in the Fabric of Reality, Karl Popper, Richard Feynman, Kurt Gödel, Thomas Kuhn, Niels Bohr, to name just a few. Deutsch explores every domain of explanation I can imagine, quantum mechanics, final cosmology, morality, esthetics, reasoning, all interwoven into one continuous tapestry. Yet this is not a new orthodoxy. Indeed, this is finally a scathing reputation of all orthodoxies (including by implication, postmodernism) unless progressivism be labeled orthodoxy.Deutsch's style is professorial (i.e. often overbearing and repetitive--although he is self-effacing when relating his own contributions). There are plenty of rhetorical questions that probe the reader's understanding and reveal wider and deeper implications. Every chapter (except the last) ends with a glossary and a summary, which reinforces the entire tapestry and affirms Deutsch's commitment to the reader, that they be given every opportunity to understand the overarching argument.The Fabric of Reality waxes passionately about embracing always the best available explanations in science. This made the book read like a preamble to the final chapter The Ends of the Universe which is a discussion of Frank J. Tipler's Omega Point Theory. Apparently the Omega Point Theory is still off limits to `serious' science. While it lacks the mathematical precision physics has come to expect from new theories, the omega point theory is nevertheless a bona fide theory with testable predictions the first of which has been verified, the mass of the top quark, the measurement of which was eminent, hence the necessity of Tipler publishing when he did. While dutifully introducing many caveats to Tipler's assertions (many of which caveats

One of the best popular science books I ever read

Published by Thriftbooks.com User , 22 years ago
This book is full of ideas and is written with exceptional clarity and power. Some of the ideas are controversial, and the author makes no secret of that, but they are surely thought-provoking and may well turn out to be right. As a physicist, I can add that clarity in this book is not achieved at the expense of logical shortcuts and gross oversimplifications, as it often happens in popular science. The intellectual and scientific level of the discussion is very high.

Published by Thriftbooks.com User , 24 years ago
"The Fabric of Reality" presents the mind-bending multiple universe (multiverse) hypothesis that arises from the "wierdness" of quantum phenomena in a style that is as clear as may be possible. The philosophical ramifications of this view are profound, and leads the author towards a fantastic overall discussion of the nature of reality itself. As a cell biologist myself, the lucid exposition of issues such as perception, knowledge, evolution and computing have opened new intellectual vistas. This is not a book for the uninitiated. At a minimum, a cultural background in quantum physics, biology, epistomology and computing are required. Indeed, the flow of logic became obscure to this reader when the discussion went deep within my scientific blind spots. In this regard, I was fortunate to have read John Gibbon's "In Search of Schrodinger's Cat", and Timothy Ferris' recent book "The Whole Shebang" prior to tackling "The Fabric of Reality". David Deutsch clearly is a man of exceptional intellect. He is passionate about his ideas. It is here where he may be faulted in that his ardent advocacy for the multiverse hypothesis tends towards the polemic. I am sure that physicists will have much to say about Deutsch's ideas, and I can imagine that the discussions will be hot. Outside of his own field, Deutsch's ideas approach the fanciful, but are always thought provoking. Although the overall style is lucid, the text can be a bit wordy and repetitive. These reservations notwithstanding, this book may emerge as a classic in the field of the philosophy of science. David Deutsch clearly possesses a remarkable intellect.

Best science book of the decade

Published by Thriftbooks.com User , 24 years ago
There are a lot of books that try to explain science to the layman and forward some new and grandiose worldview at the same time. Most of them do okay at the former, but fail miserably at the latter. This book does both, perhaps better than any book I've ever read (and I read a lot of science books). Deutsch identifies and explains the most important and interesting aspects of both quantum theory (his main topic) and the intimate relationships between it and the sciences of epistemology, computability, and evolution. The explanations are intuitive and easy to follow if you have any technical background at all, and sometimes even if you don't. Better yet, he convincingly synthesizes them into a truly compelling argument for a new (well, okay, not new but not yet widely accepted) view of reality on the deepest and widest possible scale. He steps onto a bit more shaky ground when he tries to bring in a "kitchen sink" of disciplines, some of which he doesn't seem to know nearly as much about as his native discipline (physics). Still, even the less convincing extensions to his basic idea are well considered and thought-provoking. And the basic idea itself--that zillions of not-quite-identical copies of our universe exist and are just as real and tangible as our own--is more than enough to make this book a phenomenal "mind-expanding" experience
Trustpilot
Copyright © 2022 Thriftbooks.com Terms of Use | Privacy Policy | Do Not Sell My Personal Information | Accessibility Statement
ThriftBooks® and the ThriftBooks® logo are registered trademarks of Thrift Books Global, LLC