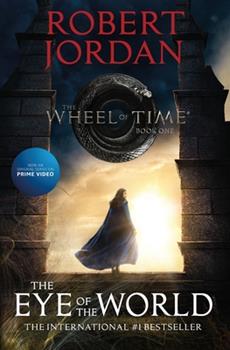 The Eye of the World: Book One of the Wheel of Time

The Wheel of Time is now an original series on Prime Video, starring Rosamund Pike as Moiraine! The Eye of the World, the first novel in Robert Jordan's #1 New York Times bestselling epic fantasy series, The Wheel of Time(R), follows Moiraine Damodred as she arrives in Emond's Field on a quest to find the one prophesized to stand against The Dark One. The Wheel of Time turns and Ages come and pass, leaving memories that become legend. Legend fades...

One of the best fantasy epics.

Published by Sibs , 1 year ago
I started reading this series in 2004. And now I am rereading for the fourth time. Few writers compell me to continue reading like Robert Jordan. A must have for any fantasy fan!

the beginning of a truly epic fantasy series

Published by mark leece , 1 year ago
Eye of the World introduces the characters and world of the epic Wheel of Time series. The character development is excellent and some characters I didn't like at all early on become my favorites as the series progresses. While Eye of the World is the first of a 14 book, 11,000 page saga it is also an excellent story on a stand alone basis, if you are perhaps reluctant to commit to such a big reading project (although I can't imagine not wanting to continue after finishing this debut).

Published by ABucher , 2 years ago
The book is great, and it starts off the Wheel of Time, which is a must read for any fantasy fan. But ... if you are a completionist, like I am, and want to have your series sitting in the library looking a certain way, make sure you know WHICH EDITION you are getting. I just bought this book, but it ended up being the wrong one, because it didn’t match up with the other TOR published books I had. Right picture on the cover, and “mass paperback” ... it just happens to be the oversize one. I’m just really disappointed in that ...

Eye of the World is an amazing start to a wonderful journey. The characters development and journey

Published by The Wheel of Time , 3 years ago
Character development and journey is what makes the series so amazing. Rereading for the first time. It's still an adventure.

How to Read the "Wheel of Time" series

Published by Thriftbooks.com User , 14 years ago
In 1990, I picked up a book by a writer named Robert Jordan, who was mainly known among fans of fantasy for the Conan novels he penned, which were among my favorites at the time. I bought it without a moment's hesitation and loved it. The Eye of the World followed the classic formula high fantasy had been treading since Tolkien wrote of hobbits leaving the Shire with Nazgul in pursuit. Getting to the end of the book and realizing it was the first in the series was icing on the cake of a thrilling, fast paced fantasy read. I couldn't wait for what I assumed would be the conclusion, the third book in the series. After all, nearly all high fantasy before the 90's were trilogies. Alas, Book 3 did not wrap up the story, and in a pre-Internet world, I had no way of knowing that Jordan intended for 12 books. By the time book 6 came out, I was tired of waiting for closure. So I got stuck at book seven for several years. Last year, I began listening to Book 7, sure that I'd be using it to augment my actual reading of the book. I'm not sure I've picked up a Jordan novel since. But I am about to begin Book 11. And I'm looking forward to the posthumous collaboration of Jordan with Brandon Sanderson. So, to all those who have given up on Jordan, and wished they hadn't, or to those who are thinking about starting but have heard too many negative reviews, here's how I recommend reading Robert Jordan's "Wheel of Time" series. 1. Understand that Jordan loves detail. He describes clothing in so much detail, that if "Wheel of Time" ever gets optioned for film or television, the costume designers will be able to go for a lot of coffee breaks. He is fond of giving elaborately detailed descriptions of every character, even minor ones. 2. The repetition of previously established plot elements in subsequent books is for people traveling on planes who pick up book 5 in the airport. It allows them to enter the world enough to get through the read. It's a device publishing companies use with bestselling series like this to ensure that the series remain a bestseller. While I have never started any series mid-way through, some people apparently do, and these passages are for them. 3. Jordan likes to weave intricate plots with a cast of characters so large it necessitates a glossary at the end of each book. Many of the books are entirely character based, and so seem to have "no action" taking place. This is because many readers want someone to storm a tower, engage in a climactic battle, or throw a ring into a fiery pit. Jordan is too busy marrying characters or introducing a new plot thread to bother with such things. And while he may not talk about a character for one book, he almost always returns to them. 4. I started thinking about "Wheel of Time" as a television series. It's long enough to sustain several seasons, and the cast is basically the OC meets LOTR. We watch TV one episode at a time. I began to view the chapters in each book as "episodes" of "Wheel of Time" as

Published by Thriftbooks.com User , 22 years ago
The Eye of the World was one of the most fun books I've ever read. It's a strait-out fantasy epic based in a fully realized fantasy world. (If you read the rest of the WoT series anyway...) Nations are involved in power struggles and have their own heritage and culture. Some of these are archetypal and some are created purely from Jordan's fantastic imagination. In essence, it is still a story of a king risen from a farm boy, heroes, honor and love. However, Jordan does a wonderful job weaving a plot that intrigues from its start and gets delightfully complicated as it progresses. (Sometimes having 5 or more main plots going on at the same time.) The characters are easy to relate to. (Or so it seemed) There are several main ones, and each has a loveable and unique personality. When I picked this book up at age 15 I believed that any fantasy that wasn't Tolkien was a sacrilege or a copy off. This book was perhaps the best bet to convince me otherwise. Jordan's views on magic and the races (i.e. elves, dwarves, etc.) are refreshing, although they too have been copied several times. I highly recommend this book to anyone who loves epics, classic sword and sorcery archetypes, or a refreshing fantasy.

The Eye of the World Book Review

Published by Thriftbooks.com User , 22 years ago
All of his life Rand al'Thor had been a farmer and a sheepherder, always believing that the stories of the Dark One and his minions were merely stories meant to frighten children to sleep. Then she arrived. An Aes Sedai. A sorceress. And after her came the Trollocs, horrific monsters bent on destruction and death... The Eye of the World, a fantasy novel that begins a series entitled The Wheel of Time, is thus begun. Rand, and two of his friends, Mat and Perrin, are taken from their quiet village by Moraine, an Aes Sedai, in order that their families might not be killed by subsequent Trolloc raids. Together they travel across a fantasy world created by Robert Jordan. The three young men soon find that real adventures are nothing like those of glory told in the gleemen's tales. With tremendously deep and intriguing characters, who all live in a world so realistic you feel as though you've been there yourself, The Eye of the World is an excellently written novel, with humor, action, adventure, fantasy, comedy, and even love. Though the length may scare away some perspective readers (782 pages), it goes by all too quickly, and I recommend it to anyone, especially those who enjoy fantasy, and I have added it to my list of personal favorites.

The Eye of the World Mentions in Our Blog 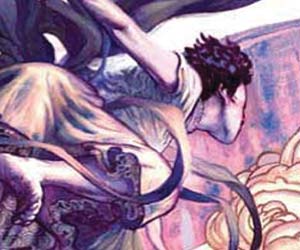 13 Fantasy Recs Based on Magic Style
Published by Ashly Moore Sheldon • June 21, 2022
Do you like knowing the “rules” when it comes to your magic? Fantasy novels can be broken down into different types. Hard magic, soft magic, and hybrids. Here we discuss these different types of worlds and give recommended reads for each.
Read Article
Trustpilot
Copyright © 2022 Thriftbooks.com Terms of Use | Privacy Policy | Do Not Sell or Share My Personal Information | Accessibility Statement
ThriftBooks® and the ThriftBooks® logo are registered trademarks of Thrift Books Global, LLC