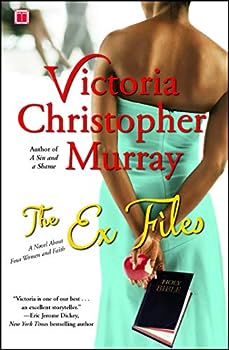 The Ex Files: A Novel About Four Women and Faith

This description may be from another edition of this product. "There are four ways a woman can handle heartbreak. She can fall apart, seek revenge, turn cold, or move on. The Ex Files is the story of these four women: When Kendall Stewart finds her husband and...

Published by Thriftbooks.com User , 14 years ago
Women can deal with heart break in so many different ways. They can distance themselves from everyone, turn vindictive, put on a fake front to hide what's really going on, or they can move on. In The Ex-Files, there are four women that deal with heartbreak completely different from each other. When Sheridan Hart came to terms that her husband broke her heart after seventeen years of marriage, she found the strength to move on. And that she did....with a younger man. Now, he's ready for the lifelong commitment, but there's something holding Sheridan back. Can she commit to this man, or does she have the fear that he will break his commitment to her like her ex-husband did? Vanessa Martin finds it hard to sleep at night since her husband committed suicide. She lays awake at night wondering why he ended his life and left her alone. Now, she's thinking about leaving this earth the same way her husband did. What will she decide? Kendall Stewart has heart break that no one could imagine. After a business trip ended early, she decides to go home and surprise her husband. Well, she got the surprise of her life...her sister in bed with her husband!!! When Kendall is faced with a decision that will change the lives of her and her sister, will she choose forgiveness or revenge? How would you describe Asia Ingrum? Is she a groupie of the NBA, mistress, or gold digger? According to her, she was none of the above. She was in love with a NBA star, and he was in love with her...or so she thought. There was only one problem: he is married. When he decided that it was time to end their 10-year affair and work things out with his wife, this was not a good decision for Asia. She was not willing to give him up without a fight. The decisions she makes would not only hurt him and his wife, but also her 5-year-old daughter that loves her daddy. Will the revenge she seeks destroy their lives? When Vanessa, Asia, Sheridan, and Kendall receive a mysterious request from their pastor for a meeting, none of the women realized that the other was invited as well. Or that they would have more in common then they wanted to admit. When tragedy strikes, they soon understand they need each other more than they know. Will they find true friendships or will they go their separate ways? Victoria Christopher Murray has done it again with The Ex-Files! This book was a real page turner. I could not put the book down when I started to read it. It will make you laugh, cry, and angry during every scenario that each woman goes through. You find yourself thinking about someone in your life that reminds you of one of the characters. This book was well written and reminds you of things that women will do if their hearts are broken. The way she brought the four women together that come from very different backgrounds and bonded them together by faith was remarkable. Trust me, once you pick this book up, you will not put it down until you've completed it. Reviewed by Jackie for Urban Rev

Awesome, awesome, and did I say awesome?!?!

Published by Thriftbooks.com User , 14 years ago
I absolutely loved this book. Ms. Victoria put her foot and the kitchen sink in this one! The only thing that left me hanging was I really wanted to know what happened between Bobby and his daughter after all the drama settled. And Ms. Thang, Aisa, still never came completely clean about what she did. Other than that, I would read this book again, I enjoyed it so much. And it also proves that prayer changes things!!!

Published by Thriftbooks.com User , 14 years ago
Sheridan Hart has had her share of problems, the most recent being the death of her dad. She's still trying to find a way to cope. With the help of her boyfriend, Brock, she is sure she will be able to get through this situation. Sheridan finds herself having second thoughts about her ex husband, Quentin. Although it's been three years, she continues to have thoughts of the two of them together as a family. Should she? Asia Ingrum, whose birth name is Chiquita, has for the last ten years had her eyes on the prize. The prize being NBA player Bobby Johnson, her daughter's father. Asia has it all, a fabulous condo, nice car, credit cards with unlimited balances and a five year old daughter, Angel, whom she loves dearly. Bobby is retiring from the NBA. Now that he's retiring, Asia is ready for him to ask the ultimate question. Asia feels after ten years and one child she is entitled to be his wife. Isn't she? Kendall Stewart is a workaholic. Everything with her is about succeeding. She has a wonderful business that she and her husband built together. Anthony, her huband, is a good man. Kendall comes home early from a business trip and is surprised to see her husband in bed with another woman. Kendall cannot understand how that is possible. What did she do wrong? Vanessa Martin's husband, Reed, of fifteen years chose to leave her in the worse way. Vanessa did not know how she was going to deal with a lot of life challenges. Vanessa knows that she needs to be strong, but soon realizes it's not always easy to do. Can she continue to hold on? THE EX FILES conveys the tales of four women, who appear different, yet each share a common bond. Actually, they have more things in common and they will find that all out as they are joined together by Pastor Ford. Author Victoria Christopher Murray has done it again! THE EX FILES holds your attention from beginning to end. I absolutely recommend this book, as well as all of her other books as well. Reviewed by: Carmen

Gripping, true-to-life fiction at it's best!

Published by Thriftbooks.com User , 14 years ago
The uniqueness of this story really pulled me in. Each woman had their own drama and were mismatched as friends, but after some seriously hard times came upon each of them, they learned to reach out to each other and seek God for strength. The Ex Files is like a soap opera with four stories going at the same time, yet they intersect on occasion. The cool thing about the plots in this book were that they were all equally compelling. Usually I want to take one character's plot and dive ahead to the next place where they are featured in the book. But I was never tempted to do that with The Ex Files because none of the stories were dull or unlikable. The conflict was real, the emotion went deep into the character's lives, and the best part about these four ladies lives was that none of their ultimate choices were predictable. In fact, each ending turned out differently than I had anticipated. Also, the author did an amazing job of taking an unlikeable characteristic such as selfishness and still managed to make me care about the women in the book. Each had issues that centered around their own needs and how they dealt with their problems was so realistic and well done. The faith element was perfectly incorporated as well. I just love the ingenuity and creativity in this author's novels. I'm going to have to read everything she publishes from now on. I don't want to miss a thing!

Forgiveness Is The Key To Moving On

Published by Thriftbooks.com User , 14 years ago
APOOO Rating- 4.5 The Ex-Files brings four unlikely women together. They have all been hurt in some form or fashion by their exes. Murray brings Sheridan Hart back from Grown Folks Business. Sheridan is the leader of the prayer group. While it was two years ago that her husband left her for a man, she is still trying to cope with not having him in her life and moving on with someone new. Vanessa Martin puts on a great front for the group. She is coping with the death of her husband. It is so unbearable sometimes, that she wants to do anything to be with him again. Kendall Stewart caught her husband in bed with her sister. She decides to write them both off...no husband and no sister. But things quickly change and she is faced with stepping up for her family. Asia Ingrum is the youngest one of the group. She is also the only one that is not married. She was actually the mistress to a NBA player. He decides to make it work with his wife and leaves Asia AND her child alone. Their pastor suggests that they come together in a prayer group and hopefully work through their situations. They soon realize they have a lot more in common then they first thought. You quickly become invested in each character. How will each of them deal with the end of a relationship? Murray does it again and definitely delivers a great story. This one will grip your heart. Donnica Copeland APOOO BookClub
Copyright © 2020 Thriftbooks.com Terms of Use | Privacy Policy | Do Not Sell My Personal Information | Accessibility Statement
ThriftBooks® and the ThriftBooks® logo are registered trademarks of Thrift Books Global, LLC