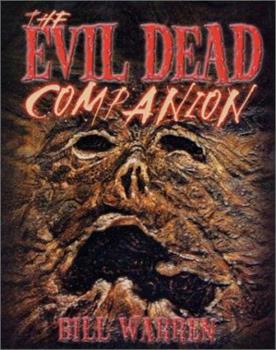 In the dank cellar of the dilapadated cabin tucked away in the great forest, there is a book bound in human skin and filled with incantations writ in blood. To read the words therein is to release a hideously unspeakable force... Rigorously made on an almost absent budget in the backwoods of Tennessee, the film was a phenomenal success--the true definition of cult film--launching the careers of its director, Sam Raimi; producer, Bob Tapert; and star,...

A must for Evil Dead fans

Published by Thriftbooks.com User , 20 years ago
A nice-sized and well-researched tome, author Bill Warren takes readers through the production history of Sam Raimi's EVIL DEAD trilogy (and the films in-between) in The Evil Dead Companion. While some folks might tire of the obsessive detailing the book provides about these classic flicks, I can never get my fill of the hometown heroes behind the EVIL DEAD films. Chronologically ordered, a three chapter blow-by-blow summation of the films (annotated by lead actor/co-producer Bruce Campbell) rounds out the book. While The Evil Dead Companion may not be the final word in EVIL DEAD study, it's a damn good start and well worth the investment for folks who think the EVIL DEAD films are altogether "groovy." (ISBN: 0312275013)

Published by Thriftbooks.com User , 21 years ago
I am a big fan of the Evil Dead series, and it in fact mad me take note of horror movies for the first time. This book talks about the lives of the creators leading up to the films, the times during the filming,and the difficulties they faced when putting the movies together. it is a well done account of Sam Raimi's early career, his relationship with Bruce Campbell, and his drive to do the movies. It is really just intersting if you are looking to discover what went on behind the making of these 3 great movies, and the effect it had on the major players behind it. I found it difficult to put down, and I really am picky about what I read, as it bores me. this book, though, I found myself reading during class, and had it done in a few days. A really good product for Evil Dead fans, or aspiring filmmakers that happen to be fans of the Evil Dead.

Published by Thriftbooks.com User , 22 years ago
Bill Warren has done a hell of a job with this overview of Sam Raimi's cult-classic film series. Filled with insight into the process of low-budget filmmaking, this book is just as indispensible to Raimi fans as the movies themselves. Flawless!

For hardcore Evil Dead fans, this is a MUST!

Published by Thriftbooks.com User , 22 years ago
I first got hooked on Evil Dead about 6-7 years ago when my brother rented Evil Dead II. Later that year I watched the other movies in the series, and have loved it ever since. The problem is, so little information was available about the movies. This year I found a number of fan sites, which were great, but still did not give thorough detail of everything from Within The Woods (forerunner to The Evil Dead) to Army Of Darkness. I ended up buying all of the special edition DVDs for all movies and learned a TREMENDOUS amount about the movies, but I still wanted more detail.I heard of this book a few weeks ago and finally picked up a copy last night. So far I've read a little over 100 pages of it, and let me tell you, if you worship Evil Dead, if you MUST know EVERYTHING you possibly can from BEFORE Within The Woods to Army Of Darkness, and want heavy detail, THIS IS IT!For the casual fan, don't waste your time. It will probably be boring to you, as this book is clearly targeted for the hardcore Evil Dead fan.The book includes a number of rare and unpublished pictures (albeit black & white), dates of filming, locations, who did what in all the movies, TONS of behind the scenes pictures and stories, interviews with many of the cast and crew, and A LOT MORE! BTW, I picked all of this up in the first 100 pages, so I'm not even half done with the book yet.MANY pages devoted to how scenes were filmed, equipment used, how camera work was done, how the woods chasing scenes are done, and much more! More detail than on the DVD commentaries!!This book includes a complete filmography for the crew, and even tells of some of their other work as well. From their first super 8 movies long before Evil Dead, up to some of their latest movies, but the bulk of the book is about Evil Dead. There are movie poster pictures, excerpts from Fangoria and other magazines from the early years, newspaper articles, and stories of hardships the cast and crew faced to bring us these movies.Couple this book with the web links in the back, and the special edition DVDs for all movies, and you will have enough Evil Dead knowledge to keep you happy for a long time! The only way you will learn more is to interview Bruce Campbell or Sam Raimi.Suffice to say, if you worship the movie (or are just a really big fan), you will love this book! LOTS of reading!The cover design is pretty cool too. A somewhat 3D necronomicon.Are you a HUGE Evil Dead fan? Then get this book!
Trustpilot
Copyright © 2022 Thriftbooks.com Terms of Use | Privacy Policy | Do Not Sell My Personal Information | Cookie Preferences | Accessibility Statement
ThriftBooks® and the ThriftBooks® logo are registered trademarks of Thrift Books Global, LLC