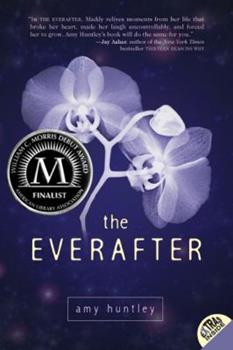 Madison Stanton doesn't know where she is or how she got there. But she does know this--she is dead. And alone, in a vast, dark space. The only company she has in this place are luminescent objects that turn out to be all the things Maddy lost while she was alive. And soon she discovers that with these artifacts, she can reexperience--and sometimes even change --moments from her life. Her first kiss. A trip to Disney World. Her sister's wedding. A...

Published by Thriftbooks.com User , 12 years ago
The Everafter is a totally unique book that's not quite like anything else I've ever read. Amy Huntley draws you in with her first sentence, "I'm Dead" and doesn't let you go, only sucks you in further and further. It was such an interesting concept of after death - going back and reliving moments of objects you lost. Every object Madison found you were thrown into a random point in her life - you never knew which part of her life you'd be headed to next. Through these moments, you really get to know Madison and you see who shaped her life. All the secondary characters give you a clue as to who Madison is and why she is that way. The secondary characters were all extremely well written. Amy Huntley's creativity shows through on every page. The scenes with Maddy and Gabe were my favorite. Every scene with the 2 of them was perfect, never being too much. The only thing I really would have liked to know is answers to a few questions that arise during the book. Overall this was a stunning debut from an author I will be watching to see what she comes up with next!

Published by Thriftbooks.com User , 12 years ago
The Everafter was like a puzzle that got put together page by page. I loved the author's view of what happens when someone dies and how it's so so so personalized to someone's own life and existence. It reminded me a little of The Lovely Bones in the sense that this is what I wish the Lovely Bones was like, I did not like that book one bit, but this one, this one was amazing! The book opens in a place that Madison calls Is, she doesn't know where she is or how she got there but she sees all these objects that she had in her life. They allow her to go back and re-experience certain times in her life as a participant or as an observer. Through this we get a glimpse into Madison's life and all the people and things that were important to her. And Madison finds out what has happened to her that brings her to this strange in between place. The secondary characters were great, from Gabe, Madison's boyfriend, to her best friend Sandra to her her sister and all the other people that come in and out of her life to make it what it is. They all brought out different sides of Madison to make her a really 3-D and believable character. From her jealously of Gabe's ex-girlfriend to consoling Sharon over her crazy mother, or trying to hide her illness at her sister's wedding, we really get to know Madison. I loved the mystery aspect of the book, how did Madison die? Which of the strange things in her life added up to her death, or was it a freak accident? I definitely was surprised when I found out the answer! I thought The Everafter shares great imagination, passion, mystery, and one glimpse of what the end really looks like. What a great story!

I Couldn't Put It Down!

Published by Thriftbooks.com User , 12 years ago
There is way more to this book than even the cover or summary can tell you. I seriously read this book in one sitting because I couldn't put it down! As the reader you travel with Maddy as she travels through The Everafter and re-experiences parts of her life based on the artifacts that are floating around her. From the beginning you can sense that there are more to these objects than meets the eye. Going back and reliving certain moments allows Maddy to follow the trail to her eventual death, like clues in a mystery that she is trying to solve. Along the way Maddy learns how to sit back and watch the events reenacted instead of personifying her previous self. This lets her see if anyone else is in The Everafter with her and what she finds out amazes her. This is one of those books that I really don't want to say much about other than it is a great read. I was immediately swept into Maddy's story and I became as desperate as she was to find out what happened. Great writing and a heart-warming (and at times heart-breaking) story that you won't want to put down! Appropriate for 7th grade and up!

Published by Thriftbooks.com User , 12 years ago
Something about The Everafter just made me have to keep reading. It was addicting! The plot was so unique, it was amazing. I admit, at first I was having a lot of trouble getting into it, but pretty soon I was so into it I didn't want to put it down. For a debut novel, Huntley's writing style is amazing, everything just flows and the story line and characters are really developed when the plot doesn't really give to a lot of development. Each chapter alternated between Maddy talking about life after she has died and her memories from different ages that she is experiencing. The alternating chapters was a great way to build up the story and by the end I was so engrossed I read straight through it last night. I was shocked to find out how she died... I don't want to give anything away so you'll have to read it to find out! Maddy was a great character and even though through most of the book she was narrating as already being dead, I felt like she was alive and well and someone I knew. It was creepy how well everything tied together in the end, as well. I was worried that Maddy's death had been built up and built up until the suspense was killing me, that I was worried the ending would be a disappointment, but I was completely wrong, it was fabulous. I'm really looking forward to reading more by Amy Huntley! Death is something that has always fascinated me, I mean where do you go after you die? Huntley's perspective was really interesting and Maddy's sister, Kristen, brought up some really great points about death itself. The writing style of this book might not be for everything, but if at first it seems confusing, KEEP READING! It's completely worth it. In addition, I really loved the cover, it just went so perfectly with the book I couldn't imagine it having a different one. Covers with bright color contrasts always draw me to them. Like the stark red apple on the black cover of Twilight, this luminous, white flower really pops against the deep purple background. I highly recommend you go get a copy of The Everafter, it's amazing and Maddy's story will stick in my mind for a long time. Rating; Plot: 10/10 Characters: 9.5/10 Ending: 10/10 Enjoyment: 9.5/10 Cover: 10/10 ___ Overall: 49/50 = 98%

Luminous and one of a kind

Published by Thriftbooks.com User , 12 years ago
The first thing Maddie knows is that she's dead--other than that, she just is. She doesn't know where she is, who she is, or what's going on. But then she encounters lost objects from her life, and each one takes her back to the events in her life during which she lost them. Slowly her memory is restored, and Maddie learns that she can even alter the outcome of each event. Each object brings her closer to the person she was before--and the truth behind her death. The Everafter is a one of a kind, luminous debut. Amy Huntley's imagined abstract after world--what it's like and how it works--is wonderfully wrought and keenly described. With great feeling and honesty, Huntley carefully peels back each layer of Maddie's life, exploring her character, and how each person she knew had an effect on her life. Huntley's eye for detail is remarkable, and the questions and ideas she presents in a simple, probing manner will get readers thinking about life and the meaning of our own existence. Moving, unique, and imaginatively told, The Everafter is a novel about life, loss, acceptance, and powerful love that will resonate with many readers, especially fans of Gayle Forman's If I Stay.
Trustpilot
Copyright © 2022 Thriftbooks.com Terms of Use | Privacy Policy | Do Not Sell My Personal Information | Accessibility Statement
ThriftBooks® and the ThriftBooks® logo are registered trademarks of Thrift Books Global, LLC