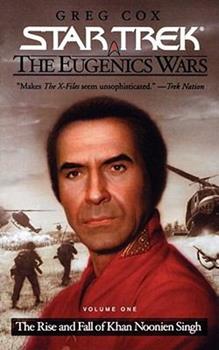 The Star Trek: The Original Series: The Eugenics Wars #1: The Rise and Fall of Khan Noonien Singh

"The most critical period in Earth's history." -- Gary Seven, Supervisor 194 Even centuries later, the final decades of the twentieth century are still regarded -- by those who know the truth of what really happened -- as one of the darkest and most perilous chapters in the history of humanity. Now, as an ancient and forbidden technology tempts mankind once more, Captain James T. Kirk of the Starship Enterprise(tm) must probe deep into the secrets...

Published by Thriftbooks.com User , 18 years ago
Of all the villains or foes in the Star Trek canon, few compare to Khan Noonien Singh as far as screen presence, charisma, or memorable moments go. Oh, the Klingons were interesting heavies, particularly in the feature films. The Borg had their moments, but their toneless "Resistance is futile" compares palely to Khan's word duels with James T. Kirk in both the 1967 Original Series episode "Space Seed" and the 1982 feature film, Star Trek II: The Wrath of Khan. Of course, credit must go to Ricardo Montalban, whose wonderful voice and acting skills made Khan one of Kirk's most dangerous adversaries.Noted Star Trek author Greg Cox's mu;ti-volume series, The Eugenics Wars: The Rise and Fall of Khan Noonien Singh is a clever and fascinating Star Trek "historical" novel which not only "fills in the blanks" about Khan and his fellow genetically engineered "supermen," but also tries to reconcile actual historical events with the established Star Trek timeline.Cox begins Volume One in the 23rd century, during Capt. James T. Kirk's first five-year mission. Assigned to investigate a colony of genetically engineered humans, Kirk, Spock, and McCoy are still mindful about their recent run-in with Khan. While en route to this Paragon Colony, Kirk decides to study the history of Khan and the Eugenics Wars of the late 20th Century.Star Trek "history" tells us that in the 1990s, a group of some 90 genetically engineered men and women took over vast regions of Earth and waged a bloody series of conflicts that became known as the Eugenics Wars. One of the foremost of these "supermen" was Khan, who at the height of his power ruled one-fourth of the planet Earth. By 1996, however, Khan and 80 of his followers fled Earth aboard the spacecraft SS Botany Bay, where they slept in suspended animation until the year 2267, when the USS Enterprise encountered the derelict vessel and Khan was revived.Cox's challenge as a 21st Century writer was to mesh this fictional history with such real-life events as India's first nuclear test in 1974, the Bhopal accident and Indira Gandhi's assasination in 1984, the Reagan-Gorbachev Iceland Summit in 1986, and the fall of the Berlin Wall in 1989, among others. In these 20th Century episodes, Gary Seven and Roberta Lincoln (who first appeared in the proposed pilot for Gene Roddenberry's "Assignment: Earth" series)investigate a secret project code-named "Chrysalis." Led by the brilliant but cold-blooded Dr. Sarina Kaur, a team of genetic experts is tweaking human DNA to bring forth a "superior" breed of humanity...a breed which is destined to supplant the existing "flawed" population of the planet.Cox adds to the fun by adding cameos by other Star Trek characters, including Gillian Taylor from Star Trek IV, Redjac from the Classic Series' "Wolf in the Fold," and Ralph Offenhouse from The Next Generation's "The Neutral Zone." And while his basic plotline resembles a mix of Star Trek and Tom Clancy novels, he also injects some witty pun

Interesting tale with lines from many Star Trek stories

Published by Thriftbooks.com User , 19 years ago
As movie reviewers Siskel and Ebert once said, the success of a good versus evil story is generally not due to the level of goodness of the hero but to the strength of the villain. Khan Noonien Singh was clearly one of the best characters ever developed in the Star Trek genre and "The Wrath of Khan" is still my favorite Star Trek movie. In this book, you learn the origins and early life of this fascinating character. However, while Khan is the emerging character, the main ones are Gary Seven and Roberta, introduced in another original Star Trek episode. Engaged in a mission to save the world from itself, these two perform many acts that are intertwined with the events that took place in the years following the time frame of the episode where they were introduced. The assassination of Indian Prime Minister Indira Ghandi, the mass gassing of people in Bhopal, India, the rise of Gorbachev and the fall of the Soviet Union are all woven into the fabric of the story. This makes the book one of historical fiction as well and really makes it interesting. An additional intriguing aspect of the story is the appearance of several other characters and consequences from the different Start Trek story lines. While these appearances will be well understood by those familiar with all of the stories, it will confuse those who are not. For example, if you have not seen the episode of Star Trek: Deep Space Nine where Quark and Odo are transported back in time to Earth and land at Roswell, the references to the Ferengi will mean nothing to you. There is also a separate story line where the Enterprise with Kirk at the helm is renewing contact with a colony of genetically enhanced humans. The Klingons of captain Koloth of tribble fame are also there and stirring up trouble. I enjoyed the book immensely and was left with a feeling of loss when it ended with crises in two of the story lines. I am now searching for the sequel and can't wait to get my hands on it.

Published by Thriftbooks.com User , 20 years ago
This book was an awesome read. It had many plot twists and yet still followed the same plot at the same time. It was set in the 70's and 80's time era on earth, and things that actually happened during that time period were brought into the plot quite ingeniously. This book was not full of the usual Star Trek characters or any ships, but it did entail the TOS crew in 3 chapters. I really enjoyed getting to know the khan character, and I am looking forward to the 2nd book that will be set in the 90's. This book is deffinately worth the hard back cost. I rate "The Eugenics Wars" one my top 5 Star Trek books!!!!

Published by Thriftbooks.com User , 20 years ago
This is Greg Cox's best book to date, in my opinion, and one of the finest in the STAR TREK lineup.Its plot has been ably summarized: suffice it to say that Greg combines two story lines from TOS -- that of Gary Seven and that of Khan -- into a novel that is more technothriller than anything else. Greg knows his STAR TREK, none better; and this book is not only a fine addition to the line of novels, it's a feast for those of us addicted to retroactive continuity.But it's far more than that. Greg writes with a kind of awareness of the world that I find all too rare in science fiction: he uses science, the news, the map of the world, Realpolitik, and business with authority in this fast-paced and well-plotted story, while never letting readers forget that -this- is Khan, whose wrath set the whole tragic action of STAR TREK II: THE WRATH OF KHAN in motion.When the book isn't dealing with power politics, intrigue, and attempts to stop the war that is inevitably coming, it's witty, capable of making me laugh out loud.There is, however, one thing I'm not laughing about: I WANT THE NEXT BOOK IN THE SERIES AND I WANT IT NOW.Greg's made a name for himself as a best-selling STAR TREK author, and he does a superb job at it. But I'd also like to see him write in a universe all his own. He comes close in this: no one else manages to write Gary Seven as well -- and now no one, except the film makers, has managed to capture Khan, his motivations, and his wrath as well either.

Published by Thriftbooks.com User , 20 years ago
Greg Cox's delightful 'The Eugenics Wars' explains why Earth history as detailed on Star Trek seems different from Earth history as we lived through it from the late 1960s to the end of the last millennium. It's not because the Trek writers guessed wrong, but because most of us have no idea of the influence Gary Seven and his colleagues exerted on global affairs. This hilarious rewriting of current events, which covers most of the period from Watergate to the Reagan-Gorbachev summit in Reykjavik, follows the secret agent from 'Assignment: Earth,' his associate Roberta Lincoln and his mysterious feline Isis as they try to protect humanity from its own self-destructive impulses. In this case, the efforts of Seven, Lincoln and Isis center on a genetic engineering project called Chrysalis, which will ultimately produce Khan Noonien Singh's crew from 'Space Seed' (and later 'The Wrath of Khan'). However, one doesn't need to have seen the episode or the film to enjoy this novel -- in fact, one doesn't even really need to be a Star Trek fan, though numerous references to the series and its characters keep regular viewers entertained. There's enough mystery, intrigue and humor to make this book successful with any reader who enjoys stylized spy novel drama. The Eugenics Wars begins with a framing story in which Kirk and his crew must negotiate with a colony that practices genetic engineering on humans. This volatile situation inspires the captain to do some research into historical records for the late 20th century, when a group of genetically engineered super-humans attempted a global coup and were secretly launched into space when their efforts failed. The real story opens with Roberta Lincoln in the shadow of the Berlin Wall, wishing she could be more like Emma Peel as she attempts to elude East German psychopaths during a Cold War raid on the Russian Embassy. Her boss, Gary Seven, has recently discovered evidence of a massive genetic engineering project that has recruited the best scientists of a generation, and although Roberta resents his extraterrestrial superiors' meddling in human affairs, she understands enough about the potential hazards to help infiltrate Project Chrysalis. Chrysalis' attempts to improve the human genome take place in a secret complex beneath India's Great Thar Desert, under the guidance of a brilliant scientist named Sarina Kaur. Unfortunately, Kaur has a megalomaniacal streak to go along with her belief in aristocratic government; as she works to breed a better sort of human, she also tries to develop a flesh-eating streptococcus bacterium to wipe out the billions of lesser men and women cluttering the planet. By tracking the specialized equipment sought by Chrysalis, Gary Seven has developed a pretty good sense of Kaur's plans for world domination. While he follows the lab equipment to its hidden destination, Roberta and Isis infiltrate Chrysalis by posing as a progressive geneticist and her pet cat. Soon they all realize
Copyright © 2020 Thriftbooks.com Terms of Use | Privacy Policy | Do Not Sell My Personal Information | Accessibility Statement
ThriftBooks® and the ThriftBooks® logo are registered trademarks of Thrift Books Global, LLC