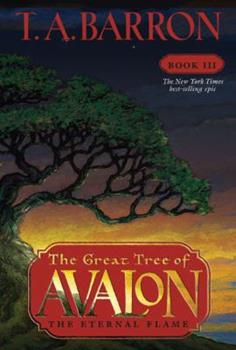 The Eternal Flame (The Great Tree of Avalon, Book 3)

Avalon, the great tree world connecting the earth and the heavens, is about to be destroyed. The warlord Rhita Gawr is bent on conquest and using an army of deathless warriors, a corrupted crystal, and a plague of arrogance and greed to succeed. Three unlikely heroes are Avalon's only hope. Tamwyn, the wilderness guide, must travel the secret pathway to the stars. Elli, the brave young priestess, must defeat a terrible sorcerer in a realm of utter...

Published by Thriftbooks.com User , 13 years ago
T.A. Barron is a very good fiction writer. The desciption of the world is great, and I like the idea that the whole of Avalon is a giant tree. I also like the fact that the main charachter can talk to animals. This book is sort of... I don't know a word for it... emotional, spiritual, and innerly-stirring, I guess you could call it, and if your a down to earth kind of earth kind of person I wouldn't recamend this book. However, if you're a daydreamer like me, I strongly recamend this book, and any others by this author.

Published by Thriftbooks.com User , 13 years ago
This is a great book! What a great story line!! And is written so to that I can visualize the story as it unfolds. It's a great series for teenagers.

THE ETERNAL FLAME (THE GREAT TREE OF AVALON, BOOK 3)

Published by Thriftbooks.com User , 14 years ago
This is the last in a trilogy about the saving of Avalon by three of its long time defenders. Tamwyn, grandson of Merlin, must travel by a secret route to the very stars to save the true source of magic. Scree, the eagleman must lead his people to fight in the war of to save Avalon. Lastly, Elli, a brave young priestess must conquer an evil sorcerer in a realm of complete darkness, Shadowroot. Together they must overcome all the odds in order to save Avalon, especially at the final battle in Mudroot. The story keeps you turning page after page with anticipation to discover just what will happen next to each character. Their adventures are spellbinding, gripping, and exciting and filled with vibrant descriptions of the characters, scenery and emotions. To truly appreciate the third book in this trilogy reading the first two, CHILD OF THE DARK PROPHECY (The Great Tree of Avalon, Book 1) SHADOWS ON THE STARS (The Great Tree of Avalon, Book 2) will provide a greater insight overall. Also reading T. A. Barron's MERLIN SERIES will enrich your total reading experience. After this novel, I sincerely hope that T. A. Barron expands and writes an Arthurian series about Merlin and the rest of the earthbound characters from these novels. I'm sure this author could lend some new twists and turns to an old tradtional favorite!

A Great Ending, to A Great Trilogy

Published by Thriftbooks.com User , 15 years ago
Some book series end with a disappointment, or cliffhanger. Some books end with a poorly written ending, or one that does not make sense. That, however, is not the case with this book. The Great Tree of Avalon: The Eternal Flame is a great ending to a great series. The book is the final installment of the trilogy, and follows the story of the three separate paths that each character takes in the book. It follows the original path of Tamwyn as he makes his way up to the upper branches, and stars beyond of the Great Tree. As well as following the story of Tamwyn, this book also follows the stories of Eli as she makes her way into the darkest reaches of Shadowroot, to destroy the crystal of Vagelano. On top of those two stories, this book also follows a third. The journey of Scree as he makes his way back to his native land, to band together his kinsmen for the fight for Avalon. This book is the best in the trilogy in my opinion. It excellently wraps together all of the main storylines, as well as a few other minor storylines that are less important. There are no plot holes, as far as I can tell, and everything is perfectly wrapped together. This final chapter of the trilogy also has many more twists and turns, and unexpected surprises than the other two. Along with being a very complete novel, this book is also very well written. There are no unimportant characters. Every character in the entire book has a significant part to play. Each character also has their own personality, which other authors often fail to do. This book is also very imaginative. The names of the made-up lands, are very believable and well thought up. The entire book is extremely descriptive, and as a whole, paints a very good picture of the land of Avalon. There is not a single vague scenario in the entire book. This is a hard book to just pick up and start reading. The reason for that is that this is the last book in a trilogy, which is a spin off of a previous five book series. It would be very advisable to read the initial Lost Years of Merlin series, before reading this trilogy. Although it is possible to pick up in the middle, it is hard, and you will more than likely find yourself lost. This book is also listed as a children's book, but it is by no means. Although this book is described to be for a younger audience, there is nothing childish about it. This book contains everything a good epic/ fantasy story should have. It has a good plot, descriptive battle scenes, a very good description of the land, and older characters. This isn't just another story of kids going off to save the world. There is much more detail to this, and for that reason, it is really readable by anyone.

Grand, but not a finale, I hope

Published by Thriftbooks.com User , 15 years ago
T.A. Barron left readers with a bundle of unanswered questions at the end of book two in the Great Tree series. In the final installment He answers many of them, provides a terrific finale and leaves the door open a crack for further visits to Avalon. There are an immense and wonderful number of actions that flesh out the events in this final book. As you read, expect to be totally immersed in the action. Plan to be deeply saddened as one character dies and discomfited as another doesn't. Expect to be very surprised as Batty Lad and Hennie the Hoolah reappear and one of them turns out to be much more than they appear. Most of all, expect to enjoy a wonderful and extremely well written conclusion to the trilogy.
Copyright © 2020 Thriftbooks.com Terms of Use | Privacy Policy | Do Not Sell My Personal Information | Accessibility Statement
ThriftBooks® and the ThriftBooks® logo are registered trademarks of Thrift Books Global, LLC