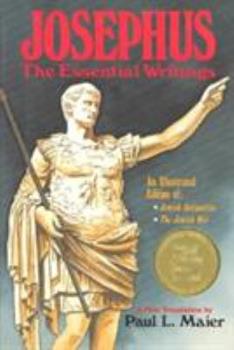 An award-winning translation and condensation of The Jewish Antiquities and The Jewish War of Josephus. The historical events take on a brilliant new dimension in this revised edition now with photographs, charts, and maps.

Published by Thriftbooks.com User , 14 years ago
Having read the complete Bible in the past, reading the works of Josephus helped put some of the events in the old testament into better perspective and opened the door to some new thinking and understanding. Not particularly an easy read, but then reading the Bible has always been challenging and Josephus' version as put together by the author Paul Maier is challenging as well and very educational. G. D. Villalba

Published by Thriftbooks.com User , 15 years ago
Anyone who has tried to struggle through an old translation of Josephus will appreciate this work. When reading the 18th century translation one gets the sense that this is a great piece of ancient history, but it's just SO tedious. Dr. Maier's abridged translation not only covers all the important passages, but does so in an easy to read English. The merit of Dr. Maier's translation is found in the footnotes about the controversial passage containing the reference to Jesus as the Messiah. Although scholars agree that the passage contains language inserted by some medieval copyist, there is obviously a dispute about what, if anything Josephus actually wrote. Subsequent manuscript evidence seems to justify Dr. Maier's conclusion almost to the letter. As for the content of the original writer, Josephus has been criticized as biased, anti-Jewish, and a Roman turncoat. I was surprised to find a different picture of the writer as I read his works. The bias criticism is hardly valid when he's compared to other writers of his time. While one can question his loyalty, the fact remains that if he had not escaped being besieged in Jerusalem, we wouldn't have such a detailed contemporary account of the Jewish War. Furthermore, his Antiquities of the Jews shows a lack of any anti-Jewish sentiment. Therefore his pro-Roman treatment of the Jewish War should be attributed to having a definite perspective given his situation. The fact is that, for good or bad, he backed the winning side in the struggle that earned him a certain animosity for having backed the wrong side. The fact that Judaism survived this time of persecution is attributable to Jews like Josephus who did not sacrifice their lives for what they pragmatically saw as a lost cause. This is a must read for anyone who is a serious student of Roman or Jewish history as well as any serious student of the New Testament.

Published by Thriftbooks.com User , 16 years ago
Instead of reading through alot of Old English interpretation and opinion, the facts here are presented straightforward, clear and easy to read for the average reader. The pictures help immensely as they transports you to the era. Still, the book is thorough and stuffed with facts, historical, personal and cultural. A great buy for anyone interested in this period.

A SUCCINCT SUMMARY OF JOSEPHUS

Published by Thriftbooks.com User , 17 years ago
For most people, such as myself, reading all of Josephus' Antiquities and The Jewish War is a daunting and time-consuming task. This book does a wonderful job of summarizing both of these important works in under 400 pages. It's easy reading and the footnotes and timelines added by Mr. Maier are helpful. If you want to learn about ancient Hebrews and Israelites as well as the destruction of Jerusalem by the Romans(which Josephus witnessed)then this is your book without reading the complete and voluminous works of Josephus then here's your book. I should note that the majority of Antiquities paraphrases what is already found in the Old Testament, which is common knowledge to scholars in this subject.

Best translation ever of Josephus for normal people

Published by Thriftbooks.com User , 18 years ago
The works of Josephus are the most important writings we have to understand the background and history of the Bible. Yet, trying to read Josephus' wordy prose is one of the most excruciating experiences I ever encountered.Dr. Maier's translation and commentary on Josephus is one of 3 modern translations I own, but is the only one I have used for the last 5 years. It brought Josephus to life for me and allowed me to read and understand this valuable primary source.Dr. Maier's work is generously accented with maps and illustrations and features a translation of Josephus that is abridged and therefore readable. Dr. Maier can be trusted to weed out the useless verbosity of the original text, as he is a leading scholar on early Roman Imperial history.Sell your other versions of Josephus and buy this one and then you may actually start to use Josephus to accent your study of the Bible.
Trustpilot
Copyright © 2022 Thriftbooks.com Terms of Use | Privacy Policy | Do Not Sell or Share My Personal Information | Accessibility Statement
ThriftBooks® and the ThriftBooks® logo are registered trademarks of Thrift Books Global, LLC