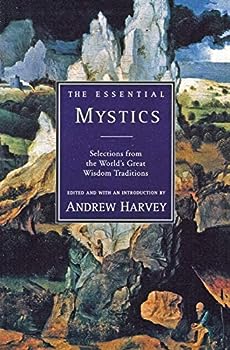 The Essential Mystics : Selections from the World's Great Wisdom Traditions

From the celebrated scholar and lecturer Andrew Harvey, a fascinating and inspiring introduction to the essential texts and themes of the great mystics. Not merely a feast of the greatest and wisest... This description may be from another edition of this product.

Go to a quiet place to read...

Published by Thriftbooks.com User , 17 years ago
This wide-ranging anthology collects all the essential texts and themes of great mystic traditions of the world -- from Buddhist, Taoist, Jewish, and Christian to Hopi, Hindi, Islamic, Sikh, Aboriginal, and Kogi. Provides analysis and historical information with special attention to the sacred feminine mystics. Well introduced with important historical information. This is an approachable guide to the unique and inspiring personalities that define the mystical experience.

Published by Thriftbooks.com User , 18 years ago
Andrew Harvey's 'The Essential Mystics' is subtitled 'The Soul's Journey into Truth'; this is a book which takes a broad approach to exploring the mystical side of religion, whatever cultural contexts it might take.This is apparent from the basic listing of chapters:Voices from the First WorldTaoism: The Way of the TaoHinduism: the Way of PresenceBuddhism: The Way of ClarityJudaism: The Way of HolinessAncient Greece: The Way of BeautyIslam: The Way of PassionChristianity: The Way of Love in ActionDrawing on the holy texts of the different traditions, and exploring the practices of the spiritualists, monastics and holy teachers of these traditions, Harvey has given us a concise volume that reaches to infinity. Harvey's ancient, native and cultural mystical experience has a choice example in the following:'Sacred One,Teach us love, compassion, and honourThat we may heal the earthAnd heal each other.'- from a Yokuts prayer With regard to Taoism, Harvey says, 'This vision in its sanity, lack of pretension, depth, humanity, and wise, demanding humility offers, I have found, a marvelous touchstone by which to inwardly test both the truths and the imbalances of the later mystical traditions.'In exploring Hindi mysticism, Harvey claims that Hinduism's chief attraction to us now is that it has kept alive a very full at once majestic and tender vision of God the Mother.'Daily existence in the heart of my extended family is the worship beyond worshipthat perceives Mother Realityas every being, every situation, every breath.'The way of clarity in Buddhism is exemplified by the Buddha's statements, such as, 'Be a lamp into yourself! Work out your liberation with diligence!' The buddha awoke to clarity, and Harvey introduces the four noble truths and other enlightenment texts.Harvey's exploration of Jewish mysticism explores an extraordinary postive vision of the divine and the human life.... Yahweh is both transcendent and immanent, thus giving blessing and goodness to the world. This follows the kabbalistic tradition with insight and sensitivity.The chapter on Ancient Greece is one of the real treasures of this book, for it is a topic which is often overlooked. We are much more familiar with the philosophical, political, and historical writings, as well as literature, but a true mystical sense has often been discounted as a side-show to the mythology. But Harvey says, 'in the great pre-Socratic philosophers such as Heraclitus and Empedocles we find maters of fearless paradox who rival the anonymous seers of the Vedas and Upanishads in their awareness of the necessity of opposites and of the unity that uses, contains, and transcends them.'Harvey's chapter on the mysticism of Islam follows a Sufi approach; there is passion in realising reality, burning like the Flame of Love, that sees all of creation as a reflection or even incarnation of the divine.'O My servants who believe!Surely My earth is vast,Therefore Me alone should you serve.'- Qur'aIn the chapter

Published by Thriftbooks.com User , 19 years ago
_If I was to take one book along to an isolated beach or island this summer for a serious read and reflection this would be it. You'll end up feeling better about your self, because you'll end up feeling better about mankind. This book proves that people of all cultures and all times have had the capacity to transcend the commonplace and petty and know God. This is the "golden thread" that connects all mystical traditions, all true wisdom in the world. _Inspite of the extensive footnotes, I would not consider this to be a scholarly book. Rather, I would consider it a spiritual book- that is why it has value and is worth the reading. Here is the mystic heart of native cultures, Taoism, Hinduism, Buddihism, Judaism, Classical Greece, Islam, and Christianity all in one beautifully designed book of 236 pages. What better use could you find for your reading time?

Published by Thriftbooks.com User , 20 years ago
This is a beautiful book that is really well put togetther. I love that it opens with "voices of the first world" - native american poems. It then moves into Taoist poetry from the Tao Te Ching, then into Hindu poems, the Judaic writings, then writings from ancient Greece, then Islamic poems, and finally christian passages and poems. The book is marvelous in the way that it shows that all religions are talking about the same things, just using different words/concepts to express them. Too bad more people don't realize this - there'd be fewer wars. Great book, really nicely pulled together. Glad I bought it.

Published by Thriftbooks.com User , 21 years ago
This book is an easy read and offers practical insights to numerous mystical traditions. It opens with Native American "voices" telling us that we have to re-connect with nature and the "majesty of the universe." It touches on eight paths to a more spiritual life, and explains how many of the traditions interrelate. This book is for the seeker with few preconceived ideas and opinions about what is Truth. It assists those interested in integrating ideas from various cultures into any of the mainstream religions.
Trustpilot
Copyright © 2022 Thriftbooks.com Terms of Use | Privacy Policy | Do Not Sell My Personal Information | Accessibility Statement
ThriftBooks® and the ThriftBooks® logo are registered trademarks of Thrift Books Global, LLC