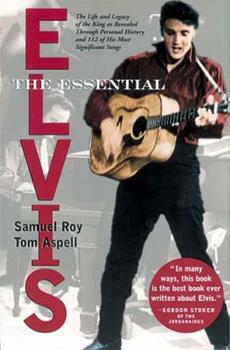 The Essential Elvis: The Life and Legacy of the King as Revealed Through 112 of His Most Significant Songs

by Samuel Roy and Tom Aspell

"The Essential Elvis" is the story of the King of Rock 'n' Roll and his effect on music through an analysis of 112 essential performances that defined his career.

Some of the best critical writing on Elvis Presley

Published by Thriftbooks.com User , 15 years ago
This book sticks to the music, and what music it was, or should I say, what music *made* - sometimes from situational film material. But this work sticks mainly to A-list, non-soundtrack recordings. Whether he stuck closely to the demo, or reference disc, or completely reworked the tune, he made it at least interesting and listenable, and those that didn't make that cut (like "Hey Jude") are given a fair chance. Since '68, I still can't believe what he did with "You'll Never Walk Alone"; discovering years later it was he on piano working out a "head" arrangement on the spot, made it seem even greater. This book will remind you why you liked a particular track in the first place or why you should have. At age 17, I didn't appreciate the depth of this performance, which in this book is described with masterful strokes. Another revelation for me was in reading about "Crying In The Chapel". I've always enjoyed Elvis' record of it, but thought he could have put more *voice* on it. Roy and Aspell evaluated the number as a whole and brought out nuances which have caused me to realize that it, too, is A-list. I would have been happy to find reviews of movie fluff entries like "Sand Castles" or "Shake That Tambourine", but let's hope we get an "alternate take edition" of this fine manuscript.

Published by Thriftbooks.com User , 15 years ago
THIS NOVEL SHOULD GO DOWN IN HISTORY AS ONE OF THE GREATEST BOOKS TO EVER BE WRITTEN ABOUT THE KING OF ROCK -N- ROLL . IT'S REALLY GOOD . IT TELL'S THE STORY BEHIND 112 OF THE KINGS GREATEST AND NOT SO GREATEST SONGS .IT FOCUSES ON WHAT REALLY IS GREAT ABOUT ELVIS' LIFE HIS MUSIC !

A tribute to the King!

Published by Thriftbooks.com User , 22 years ago
This excellent book is about what was most important to Elvis and his fans: his songs and music. One of the most significant things the authors said about Elvis is the following words: «The first and best thing that can be done for Elvis Presley is to lessen the emphasis that has been placed on his later years and focus on the talent and genius that define the King.....one of the reasons for his demise was because he cared and felt too much...it got to the point that being Elvis Presley was one of the hardest jobs in the world». I agree completely with the authors and, as a fan, my only wish is that this book will make the people, who don't respect Elvis, see the light...

Published by Thriftbooks.com User , 23 years ago
"The Essential Elvis" is a thoughtful exploration of the King's music from 1954 until his death in 1977. It's an important and much-needed work that concentrates solely on Presley's artistry. Authors Samuel Roy and Tom Aspell break free from the ill-informed mythology of most Elvis publications by re-examining Presley's work in provocative, exciting ways. You may not agree with all of the writers' criticisms, but it encourages you to track down the 112 Elvis recordings listed in their book.

It sounds like a good angle to look at Elvis' music.

Published by Thriftbooks.com User , 24 years ago
It sounds like a good angle to look at Elvis' music. I'm looking forward to its publication! And I plan on picking up a copy as soon as possible!
Trustpilot
Copyright © 2022 Thriftbooks.com Terms of Use | Privacy Policy | Do Not Sell or Share My Personal Information | Accessibility Statement
ThriftBooks® and the ThriftBooks® logo are registered trademarks of Thrift Books Global, LLC