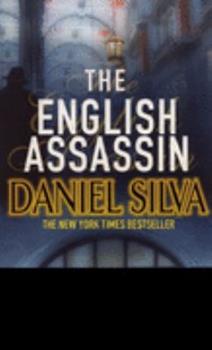 (Book #2 in the Gabriel Allon Series)

Spy turned art restorer Gabriel Allon finds himself accused of murder in this New York Times bestseller from Daniel Silva. An Israeli spy by trade and art restorer by preference, Gabriel Allon arrives... This description may be from another edition of this product.

Published by Carissa42977 , 1 year ago
I really enjoyed the plot in this book. This was my first Daniel Silva book, and I'm excited to read more!

Rated as a good copy but had a broken spine.

Published by None , 2 years ago
Received a bad library copy with a broken spine.

"Beware the Gnomes of Zurich...All Switzerland is a bank."

Published by Thriftbooks.com User , 13 years ago
How Swiss bankers and financiers (the Gnomes) financed the German war effort during World War II, prolonged the war, and profited from the looting of Jewish accounts and art collections becomes the focus of Silva's fifth novel, the second to feature Gabriel Allon. Here Allon, an art restorer who has also worked as an assassin for Israeli Intelligence, is called to Zurich to restore a Raphael painting, only to discover the owner of the painting, Augustus Rolfe, dead upon his arrival. Further investigation reveals that Rolfe, a banker, also hid a large art collection in his basement vault, though it has now vanished. As Allon comes to know Rolfe's violinist daughter Anna, he must avoid the Swiss police, who are dedicated to preserving bank secrecy laws and the appearance of propriety even as they aid in the hiding of Jewish artifacts. In league with a secret Swiss cabal which will stop at nothing to preserve their own ill-gotten gains, the police also believe that Anna may know more than she lets on. A second plot, which eventually ties in with the main plot, features "the English Assassin," who works for a don in Corsica who is planning a major assassination. As the plot twists from Zurich to Germany, Portugal, France, England, and Corsica, Allon and the English Assassin come closer to a showdown. Based on facts about Swiss banking and its laws, which guarantee secrecy and allow Nazi plunder to be owned by Swiss citizens if they "acquired it in good faith," the novel allows the author to personalize Swiss abuses and weave them into his novel. Though the plot is a bit difficult to follow, at times, since the exact connection with the English Assassin is not clear for much of the novel, it moves quickly and bloodily forward, filled with violence, beatings, torture, and murder. The villains are truly villainous, and the good guys, if not virtuous, are at least "honorable" in intention and ruled by good motives. Unfortunately, the novel is too broad to allow for much character development, and the movement throughout Europe prevents a sense of place and atmosphere from developing. Switzerland, though the main location, is shown selectively through negative elements which advance the plot. The climax, when it occurs, is not the blockbuster one would expect. Rather, it is more a fizzling out of details as the novel comes to a conclusion, though not necessarily a resolution. Silva is a terrific thriller writer, but this is not his most thrilling novel. n Mary Whipple Moscow Rules A Death in Vienna Prince of Fire The Marching Season

The English Assassin is another page turner from Silva

Published by Thriftbooks.com User , 20 years ago
The English Assassin is another fine novel. Daniel Silva provides the reader with his usual blend of action, excitement, intrigue, and plot twists -- all set within the historical context of the secret world of the Swiss banking system from WWII to the present. In a reprise of Gabriel Allon, the art restorer and sometimes Israeli spy from the Kill Artist, Silva spins a tale of a secret Swiss society, long-ago collaboration with Nazi Germany, and a quest to recover art treasures plundered by the Nazi's in WWII. Gabriel is drawn into the plot when he is sent to restore a painting belonging to an elderly Swiss banker. Finding the banker dead, Gabriel is quickly forced to match wits with the mysterious English Assassin and members of the clandestine Swiss organization that seeks to keep the past of Switzerland buried. This book is thoroughly entertaining. A must read for fans of Silva's previous works.

Published by Thriftbooks.com User , 20 years ago
This is my first Daniel Silva novel, but it will not be my last. I was a loyal Ludlum fan and mourned his declining craft long before I mourned his death. I liked Follett in the beginning, but he, too has pandered to the masses, leaving his skills on the word processor. THE ENGLISH ASSASSIN is Daniel Silva's fourth book and a page-turner from start to finish. While his body count rivals that of early Ludlum, Silva is a more polished story teller. THE ENGLISH ASSASSIN begins with the death of Augustus Rolfe, an elderly Swiss banker who collaborated with the Nazis (no new territory here) to acquire numerous pieces of art during World War II. At the end of his life, Herr Rolfe decides to atone for his sins and return the paintings to the heirs of their original owners, thus exposing the dirty little secret all Swiss fear. Publicity of this kind just won't do, so Herr Rolfe is killed. Gabriel Allon, Jewish intelligence agent/art restorer who is set to receive the paintings, finds Herr Rolfe's body and thus the chase begins for the real killer and the enormous power behind the Swiss conspiracy of silence. While I'm a little tired of the Nazi 'rape of the art world' story, I'm glad to have found someone who writes solid spy stories. I look forward to more work from Silva. As they say in show business, he's got the 'legs' to last a long time. Enjoy!

Published by Thriftbooks.com User , 20 years ago
Daniel Silva's "The English Assassin" grabbed my interest from the first page and took me on a exhilarating roller-coaster ride. It has non-stop action in a variety of exotic locales, fascinating characters, intelligent dialogue and terrific suspense. It is one of the best spy novels that I have read in years. Gabriel Allon is a talented art restorer who lovingly repairs old paintings. In his other life, he is a spy for the Israeli government. He can kill expertly and without remorse when the situation calls for deadly force. Ari Shamron, Gabriel's handler, has a new mission for him. Gabriel is to visit Zurich and speak to an old Swiss banker named Augustus Rolfe, a man who wants to reveal his secret activities during World War II. Gabriel soon encounters some violent men who will do anything to prevent the truth about Switzerland's sordid past from becoming public knowledge. He also meets Rolfe's beautiful and tempestuous daughter Anna. She is a troubled woman who, like Gabriel, is haunted by demons from the past. Who is the "English Assassin" in the title? He is a former British soldier who has become a ruthless killer for hire. He also becomes involved in the Rolfe case, but his agenda differs markedly from Gabriel's. The English Assassin is a morally ambiguous character who is as fascinating as he is deadly. What makes this novel better than most of the other spy thrillers around? It does not rely on cliches to keep the intricate plot moving along. The characters are sharply written and the dialogue sparkles with wit, humor and occasional poignancy. What elevates "The English Assassin" most of all is the issues that it tackles. Silva explores the culpability of the Swiss bankers, who apparently were indispensable to the Nazi's war machine. Those who help murderers prosper from their horrible acts also have blood on their hands, Silva implies. Don't miss "The English Assassin." It is an unforgettable and fast-paced thriller that will make you think about the issues it raises long after you have read the final page.

the wait was worth it

Published by Thriftbooks.com User , 20 years ago
My only problem with Daniel Silva is that he doesn't write books fast enough. The wait for The English Assassin, though, was more than worth it. Silva's a first-rate writer who has taken the well-worn concept of the international thriller and turned it into something compellingly new. The English Assassin is a perfect example of his skill: he throws together the reluctant, tormented spy Gabriel Allon with a tempermental violin virtuoso grappling with her own dark secrets and sends them off to investigate the Swiss collaboration with the Nazis in the theft of priceless art. It is an utterly fascinating story, brought to life with the help of a cast of superbly crafted supporting characters, including a vicious English assassin who is a bit more complex than your usual villain. Along the way Silva masterfully draws us into the worlds of art and music and gives us a tempting tour of some out-of-the-way European locales. I started The English Assassin the other night and finished it in one sitting. My only disappointment? It'll be another year before the new Silva pops up on the shelves.
Trustpilot
Copyright © 2022 Thriftbooks.com Terms of Use | Privacy Policy | Do Not Sell or Share My Personal Information | Accessibility Statement
ThriftBooks® and the ThriftBooks® logo are registered trademarks of Thrift Books Global, LLC