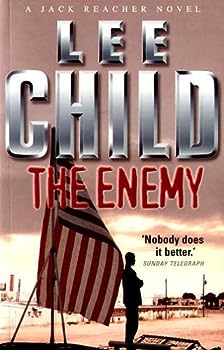 THE #1 NEW YORK TIMES BESTSELLING JACK REACHER SERIES THAT INSPIRED TWO MAJOR MOTION PICTURES AND THE UPCOMING STREAMING SERIES REACHER "A thriller that gallops at a breakneck pace."--Chicago... This description may be from another edition of this product.

Prequel that hasn't become a soap opera (yet)

Published by Thriftbooks.com User , 17 years ago
This story is set in 1990, just after the fall of the Berlin wall, so is about a young Reacher and a time before email, cell phones, DNA testing... It discloses the tough guy's personal history (a sure sign of impending soap-opera-ness. I hope Child doesn't go that route) and how his character's analytical mind works. There's certainly a lot of numerical analysis and military procedure, but it's not written with an eye toward an easy revision into a screen play. Child's restraint against writing screen-play-masquerading-as-novel (such as Michael Crichton's recent oeuvre) is especially laudable because the author did indeed write TV scripts. However, as the plot unfolds into the second half of the book, it lapses into straight narrative to review for the reader the twists and turns, instead of unveiling the plot for the reader to 'see.' This is a weakness. The characters, main as well as secondary, have more facets than in earlier novels and there's a very dry humor. Whether it's authentic military humor, I don't know, but I do giggle every few pages, especially over the terse dialog. I wish I could treat my colleagues like that without inviting deadly office politics. Best of all, I learn from the intentionally insubordinate Reacher how not to be intimidated by superior officers. I love this tough guy.

A Terrific Change of Gears

Published by Thriftbooks.com User , 17 years ago
This is Child's eighth Jack Reacher novel. In the first seven, Reacher is the strongest, toughest, smartest action hero. The books were fun and exciting, but did not require much thought to get through the plots. In The Enemy, Child has changed gears. The book is set when Reacher was a young major in the military police (age 29) in 1989-90. This is a pure police procedure mystery set in the military which is a setting obviously well-known to Child. In this book, Reacher solves the mystery with brains and legwork. There is only one true action scene and that is minimal to the book. I enjoyed this book more than Child's others. It had more substance and thought. Reacher was treated as a developing personality rather than the automaton he seems to approach in the other books in the series. This military police mystery is highly recommended both to Reacher fans and fans of mysteries in general. As a sidenote, you do not have to have read the other books in the Reacher series, since this one predates the others in the character's life. Enjoy a good read.

A master work from a master craftsman

Published by Thriftbooks.com User , 18 years ago
Lee Child writes books the way Miles Davis played music. Every composition contains recognizable elements, and yet every composition is completely different.In a Lee Child composition, some of the recognizable elements are: clean, elegant prose; a tight plot; abundant twists and turns; and more than one heart stopping surprise. An added element in "The Enemy" is that this book not only stops the heart, but tugs at the heartstrings.The eighth Jack Reacher novel, "The Enemy" takes place in 1990, as the Berlin Wall is coming down and the world is drastically changing. In the Army, Jack Reacher's life-long home, change is not good. It's an enemy to be defeated by any means necessary. Reacher is a man who has dedicated his life to doing the right thing, to protecting the Army. Now he's faced with an awful task: he must protect the Army from itself.In seven previous Jack Reacher novels, we've come to know him as a loner, a man who cannot and will not end his chosen life of wandering isolation. In "The Enemy" we meet a younger Reacher, not yet hardened by the choices this case will force upon him. This Reacher is just a bit warmer, just a bit more accessible, with an easier sense of humor. When he's inexplicably transferred from Panama to Fort Bird, North Carolina, Reacher doesn't think much of it - hey, it's the Army - but he soon discovers that this is no ordinary assignment. A heart attack victim at the local no-tell motel is a two-star general. The general's wife is found murdered. Reacher's commanding officer is replaced, suspiciously, by a vicious idiot who wants nothing more than to make Reacher the fall guy for the entire mess. And in Paris, Reacher's mother is very, very ill.Partnering with a young, female lieutenant, Reacher sets out to solve the mystery in spite of the roadblocks in his path. And, typically, he refuses to let anything or anyone stop him. Just as typically, Reacher is determined to do the right thing, no matter what the personal cost may be. In this case, the personal cost will be high - maybe more than Reacher can afford.The question at the heart of the book is, who or what really is the enemy that Reacher has to fight? And does he have any hope at all of winning the battle? Lee Child has written another gripping novel, one with heart and soul, suspense and passion - a masterwork from a master craftsman.
Trustpilot
Copyright © 2022 Thriftbooks.com Terms of Use | Privacy Policy | Do Not Sell or Share My Personal Information | Accessibility Statement
ThriftBooks® and the ThriftBooks® logo are registered trademarks of Thrift Books Global, LLC