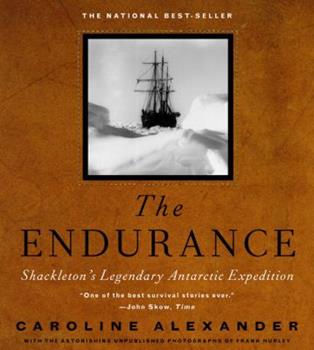 NATIONAL BEST SELLER - A riveting account of Shackleton's famed Antarctic expedition, recounting one of the last great adventures in the Heroic Age of exploration--perhaps the greatest of them all--the shipwreck that stranded the crew for twenty months. Including never-before published photographs. In August 1914, days before the outbreak of the First World War, the renowned explorer Ernest Shackleton and a crew of twenty-seven set sail in their ship,...

Published by Thriftbooks.com User , 22 years ago
After reading this book, I bought and read the "classic" by Alfred Lansing and while it was a very good read, I believe Alexander's book to be the better one. She includes details about the crew and Shackleton and about their post-voyage lives that makes the story much more personal. In addition, she includes details of the journey which were left out of Lansing's book which left me with the impression that Lansing was "protecting" Shackleton against possible negative or critical comments--an entirely unnecessary thing to do given his incredible leadership of this voyage. For example, Lansing's book does not talk about the mental breakdown of several of the men after the boat trip to Elephant Isle nor about McNish's resentment of Shackleton for having to kill Mrs. Chippy. Nor does he mention Shackleton's and the other crew member's claims to have felt a "fourth presence" with them on the last climb over the mountains of S. Georgia. These details, together with the incredible photography included in Alexander's book, make her book the more complete and equally exciting rendition of this incredible voyage.

Published by Thriftbooks.com User , 22 years ago
Caroline Alexander, author of this extraordinary book filled with breathtaking photographs, is guest curator of the traveling museum exhibition "The Endurance: Shackleton's Legendary Antarctic Expedition." As unforgettable as the book is, the exhibition is even more spectacular! The greatly enlarged copies of the photographs, combined with artifacts, diaries, a reproduction of the James Caird lifeboat (frighteningly small) , and personal memorabilia contributed by the families of these explorers make Shackleton's voyage tangible, very much more than something in a book, even one as good as this one. For those interested in seeing the exhibition, it is at the Peabody Essex Museum in Salem, MA from June 23 - Sept. 10, 2000. It will be at the Field Museum in Chicago from October 7 - Jan. 14, 2001. It will be at the Houston Museum of Natural Sciences from Feb. 10 - May 6, 2001, and it will be at the Burke Museum at the University of Washington (in Seattle) from June 7 - Dec. 31, 2001.

A Gripping and Beautiful Tale of Leadership

Published by Thriftbooks.com User , 22 years ago
This is a truly gripping and beautiful book. The story of the voyage and survival of the Endurance, Sir Ernest Shackleton's 1914 expedition to traverse the Antarctic continent on foot, is truly awe-inspiring. The photographs of Frank Hurley, the expedition's photographer, are sublime and powerful. I can't recapture the magnitude or beauty of the book in a few words, but two things struck me as particularly moving. At one point, Shackleton and five men sailed 800 miles in a 22-foot boat through the tempestuous South Atlantic Ocean to reach help. I doubt that even Alexander's account of the voyage does justice to the courage, skill and fortitude exhibited by these men.Two comments put this one piece of the survival struggle into perspective. Alexander comments, "They would later learn that a 500-ton steamer had foundered with all hands in the same hurricane they had just weathered." And upon reaching civilization for the first time, the captain of the Endurance, Frank Worsley records the reaction of some of the hardiest seamen in the world: Three or four white-haired veterans of the sea came forward. One spoke in Norse, and the Manager translated. He said he had been at sea over 40 years; that he knew this stormy Southern Ocean intimately, from South Georgia to Cape Horn, from Elephant Island to the South Orkneys, and that never had he heard of such a wonderful feat of daring seamanship as bringing the 22-foot open boat from Elephant Island to South Georgia.... All the seamen present then came forward and solemnly shook hands with us in turn. Coming from brother seamen, men of our own cloth and members of a great seafaring race like the Norwegians, this was a wonderful tribute. (The Endurance, pages 166-167). The second thing I found so moving about Alexander's account was the skillful and authentic way she weaves Hurley's unbelievably stark and beautiful photographs into the fabric of this story. Most moving of all, though, is the absence of photographs during the voyage described above. Shackleton, who lived and led for his men, left them to bring help, and it is somehow fitting that we have the same sense of solitude and lack the tangibility of a photograph to reassure us about the well-being of the 22 men left behind.Shackleton ("the Boss") to his men, was a true leader. In her conclusion, Alexander writes of him, "He would be remembered not so much for his own accomplishment -- the 1909 expedition that attained the farthest South -- as for what he was capable of drawing out of others." She goes on to quote Worsley: Shackleton's popularity among those he led was due to the fact that he was not the sort of man who could do only big and spectacular things. When occasion demanded he would attend personally to the smallest details.... Sometimes it would appear to the thoughtless that his care amounted almost to fussiness, and it was only afterwards that we understood the supreme importance of his ceaseles

THE BEST BOOK!! YOU MUST READ IT!!

Published by Thriftbooks.com User , 23 years ago
The Endurance by Caroline Alexander is a non fiction book about an explorer Sir Ernest Shackleton and his crew as they try to become the first explorers to cross Antarctica on foot. Sir Ernest Shackleton was one of the most known polar explorers of his day. Shackleton and his crew of 27 set out to sea on his boat Endurance on August 8th, 1914. The 28 men went down to Buenos Aries, Argentina then they continued to their last stop South Georgia Island which is in the southern Atlantic before they went to the pack ice and beyond. Once they got the ship into the pack ice they followed the cracks between each floe (leads) to try to get to the main land of Antarctica. Do they ever get home to England? Do they all even survive such a journey? This book was a heart racing kind of book. If you previously were not interested in history books The Endurance might change your opinion. I was impressed by how these men risked their lives freezing to death just to obtain their personal goals. The adventure of when they have to abandon ship will leave you hanging from your seat. The way Caroline Alexander wrote the book was engulfing . Her detail was thorough and she must have put many months of research on their journey. She also used clips from journals telling in the sailor's words what was happening and what was going on in their minds. I have read a few books about sailing the sea and The Endurance was the best one because of the way in which it was written. The photographer Frank Hurley took unbelievable shots of the whole expedition. The types of photos that were taken included, black & white stills, movies and color slides. The photographs look like they were taken recently by a digital camera instead of a Kodak in the early 1900's. Technically the pictures are crisp and clear for surviving the 22-month journey. This is a book that should be in every school library and all public libraries so everyone can experience The Endurance.

Your human spirit will live with this book

Published by Thriftbooks.com User , 23 years ago
Caroline Alexander's book touches something deep within our human spirit; challenge, hope, survival and love of life. For those who love to challenge themselves by the outdoors with the hope of great rewards these experiences can bring, read this book to understand how these pursuits can also provide very real dangers, except in this book the dangers go beyond one's imagination - twenty-two months in wet, sub-freezing conditions on ice, frozen lands and the Antartic's violent oceans.If you have read or enjoy reading books and adventures like Krakauer's "Into Thin Air," this book is a MUST read.Frank Hurley's photographs are excellent. Frank Hurley's committment to taking these pictures is unbelievable when considering the environmental conditions of this part of the world. My emotions rose and fell with the reading of "The Endurance." The book is a well-written tribute to the 28 men of the expedition. These men are adventurers and heroes beyond description. I was pleased with Ms. Alexander's afterword, which described what became of each of them after their rescue, this completed the story.
Trustpilot
Copyright © 2022 Thriftbooks.com Terms of Use | Privacy Policy | Do Not Sell or Share My Personal Information | Accessibility Statement
ThriftBooks® and the ThriftBooks® logo are registered trademarks of Thrift Books Global, LLC