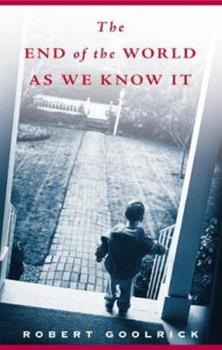 The End of the World as We Know It: Scenes from a Life

It was the 1950s, a time of calm, a time when all things were new and everything seemed possible. A few years before, a noble war had been won, and now life had returned to normal. For one little boy, however, life had become anything but "normal." To all appearances, he and his family lived an almost idyllic life. The father was a respected professor, the mother a witty and elegant lady, someone everyone loved. They were parents to three bright,...

Tolstoy was right, I guess....

Published by Thriftbooks.com User , 15 years ago
"Happy families are all alike; every unhappy family is unhappy in its own way." Robert Goolrick's memoir is a stunning acknowledgement of Tolstoy's view. I've been reading a lot of memoirs lately, mostly by people in the "baby boomer" age. Most have been very good. And, all have concentrated on the parent-child connection, or, in some cases, the lack of connection. After finishing each book, I'm reminded of the scene in the movie "In and Out", where Emily, the character played by Joan Cusack, screams out, "Is EVERYBODY [..]?!". I want to yell, "Did EVERYBODY have rotten childhoods!?" But of all the "rotten childhoods" depicted in the latest rash of memoirs, no one had it rougher than young Robert Goolrick. Sexually assaulted at the age of four by his drunken father, the attack was hushed by his mother and grandmother. Goolrick hints at more attacks by his father. Robert grows up bi-sexual, unable to sustain a relationship with either sex. His parents, by their cruel,on-going, thoughless, drunken actions, had ruined their child's life. Not everyone should be a parent; clearly the Goolrick couple shouldn't have had pets, let alone human children. The book is beautifully written.

A beautiful, if painful, book.

Published by Thriftbooks.com User , 15 years ago
I was drawn to this book because it seemed to be the most recent addition to the "disfunctional family" genre which often captivates me. However, this memoir transcends this genre in that it is not written for shock value or the easy laugh but appears to be a genuine attempt to evoke an era in the south, and to come to terms with a life that should have been glorious, but was horrific. Robert Goolrick's parents are perhaps the guiltiest, most wrong-headed, unforgiveable couple that have graced the pages of literature. Their actions and their decision about how to deal with their sensitive, gifted child wrought such power and devastation. Here Robert Goolrick articulates in a way that is both gripping and poetic, how one human being has navigated a difficult and confusing life and continues to live it, I would say heroically. It is fortunate for the reader that although his parents have shredded his psyche they were unable to obliterate his honesty or his talent. This book reminds me of Susan Minot's wonderful fictional account of her childhood, Monkeys.

Published by Thriftbooks.com User , 15 years ago
There are all kinds of beatings. Among the "better" classes, belts and fists are unthinkable. The weapon of choice is generally words, but it can veer into sexual abuse. And the damage is generally to a child's self-esteem and sense of safety. The worst thing about these assaults? The parents "know better." Indeed, if they heard about a neighbor's child being verbally or sexually abused, they'd be shocked. Who knows? They might even intervene. So why are these parents blind to their own cruelty? They're drunk. "My father died because he drank too much." That's the first sentence of Robert Goolrick's memoir. The second? "Six years before, my mother had died because she drank too much." The third? "I drank too much." If you drink, if you are the child of a drunk or have drunks among your family and friends, this is not shocking news to you --- alcohol is a kind of misery that seems to love company. But even if drunks are your lot, I doubt you know the kind of depravity that Goolrick describes here. "My mother and father presented a perfect picture to the world, a happy, witty, charming young couple who were madly in love, and did nothing but have fun," he writes. And so it was. His father was Virginia gentry, a college history professor. His mother was a beauty, well read, a lady; she wore gloves and powder. At the Goolricks' cocktail parties, they served cheese straws and cucumber sandwiches, and the guests laughed heartily at their stories. And his father ended up with rats cavorting on the Persian carpets. "Somebody once said to me that all families were either about the parents or about the children," Goolrick notes. "Ours was about their parents." And yet, through the first half of this memoir, the dominant note is forgiveness. Alone of the three Goolrick children, Robert got nothing from his parents. He won fellowships to pay his way through school, where he compiled a brilliant record; they didn't seem to notice. He paid for their house; they never thanked him. Why does Goolrick forgive these wretched, thoughtless, insufferable people? Because, when he was four years old, something happened. I'm not going to say what it was --- Goolrick artfully structures this taut (213 pages), unsettlingly elegant book so you're well into the home stretch before he reveals the awful deed --- but its effect is devastating. That is, it's the defining event of Goolrick's life. It leads to drugs and cutting and suicide attempts and desperate sex --- all the stations of the self-loathing cross. The title of this book is ironic. In the song, the lyrics go: "It's the end of the world as we know it/And I feel fine." But at no point in these pages --- not even at the end --- does Robert Goolrick feel fine. For whatever reason, he is unable to get past the damage his parents inflicted --- and then ignored. Given that, the writing of this book is a Herculean achievement. So why push this sad, ugly story on you? Because you are a drunk, and maybe

Published by Thriftbooks.com User , 15 years ago
I finished my father's copy of Mr. Goolrick's book with in a few hours of picking it up. It is, quite simply, engrossing. Mr. Goolrick's story is sometimes incredibly difficult to read due to it's emotional intensity and rawness. He does not censor, dilute, or gloss over any of the emotions or events of his life. For me, one of the more interesting aspects of this book is that most of it is set in my hometown. I recognized a few of the people on these pages (including Mrs. Lachman's crazy son who is still crazy and terrified me as a child. Still does, to be honest. A couple of months ago, he almost blew up his house.). "The End of the World as We Know It" is a brutally honest, brave book. If you have ties to Lexington, have fun playing spot the town eccentrics. Lord knows, we have our fair share.

Published by Thriftbooks.com User , 15 years ago
This is a wonderfully constructed story of a harrowing Southern childhood. Mr. Goolrick builds his story sentence by elegant sentence, and even in the face of the most horrible childhood events manages remarkable compassion toward his parents and the way they've ruined his life. The book is filled with warmth and humor as well, and many keen-eyed observations of a well-bred American family gone wildy wrong. Moving and inspiring, you'll think about this book after you turn the last page.
Trustpilot
Copyright © 2022 Thriftbooks.com Terms of Use | Privacy Policy | Do Not Sell My Personal Information | Cookie Preferences | Accessibility Statement
ThriftBooks® and the ThriftBooks® logo are registered trademarks of Thrift Books Global, LLC