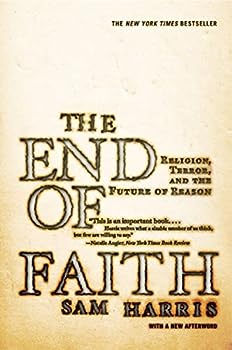 The End of Faith: Religion, Terror, and the Future of Reason

In The End of Faith, Sam Harris delivers a startling analysis of the clash between reason and religion in the modern world. He offers a vivid, historical tour of our willingness to suspend reason in... This description may be from another edition of this product.

Published by Thriftbooks.com User , 16 years ago
Author Sam Harris has a problem with the world's major organized religions. His thesis, in particular, is that while the foibles of religious fundamentalism (of various brands, though always essentially bespeaking the same mentality) may appear to be more or less harmless, they are in fact a gravely dangerous phenomenon that threatens humankind itself with extinction. The problem is that with the more rabid varieties of religious fundamentalism we are no longer looking just at the ravings of those halfwit television evangelists who run the credit card icons across the bottom of the screen for the ensnaring of the gullible. Now, on the contrary, we have entered an age- nothing similar to which has been seen since the Spanish Inquisition- in which whole hordes of religious zealots view themselves as being commanded by the "will of God" (whatever in the world that means) to torture, multilate, and brutally kill the rest of us. It is this unreasoning willingness to commit acts of atrocity for "God" (under whatever name), based upon belief systems that are not only of undemonstrated validity but of absolutely undemonstrable validity, that bothers Sam Harris, and he does a truly eloquent job of explaining why, in terms of radical Islam, Christianity, and other belief systems. While Mr. Harris takes on Islam with considerable fervor, he certainly does not neglect the sordid side of religion in the West. He argues, with regard to both the Judeo-Christian and Islamic traditions, that it is only by selectively ignoring parts of the so-called sacred texts that many people, eschewing the more radical views of these belief systems, can function even as religious "moderates." He points out, for example, that in the Bible's book of Deuteronomy, one is compelled to murder anyone who "serves other gods"-specifically, "You must stone him to death" (Deut. 13:7-11). (In what circumstances, one may ask, is one "serving other gods"? There was a time when Protestants and Catholics turned this principle upon each other, as in fact they still sometimes do in Northern Ireland.) Likewise Harris points out places in scripture where the death penalty, in no uncertain terms, is prescribed for such offenses as "taking the Lord's name in vain" (Leviticus 24:16), working on the Sabbath (Exodus 31:15), cursing one's father or mother (Exodus 21:17), and adultery (Leviticus 20:10). It is not that most people subscribing to this belief system would actually kill anyone for, say, working the Sunday shift at Burger King- but in order to refrain from doing so, such "believers" must selectively tune out the textual command to do so. In the West, we have largely (thank God, one is tempted to say) separated religion out of public life. The Founding Fathers were careful, in the Constitution, to disallow establishment of a national religion, even though certain modern Presidents have trampled upon this founding wisdom to the extent of using such lunatics as Pat Robertson as adv

The Dangers Of Faith-Based Beliefs And Organized Religion

Published by Thriftbooks.com User , 17 years ago
This is a brilliant book and the author had to have a lot of courage to write it. This is the author's first book. Sam Harris, the author, is now working on his doctorate in neuroscience. He has studied Eastern and Western religious traditions, along with a variety of spiritual disciplines for twenty years. Harris calls for the end of religious faith in the modern world and identifies religious beliefs as the core of many of the human atrocities throughout history. He argues that our willingness to ignore reason and scientific facts as we maintain our beliefs, not based on sound science and reason, will lead the world into more peril because these beliefs not only legitimize intolerance, but they have also invaded most aspects of political and secular life and threaten to become apocalyptic in a world with weapons of mass destruction. The author believes that all religions are harmful, not just extremist & terrorist religions, which are obviously harmful. He sees those who practice moderate religion as a bigger part of the problem than some people think because they provide a foundation of unreason that radicals, fundamentalists and religious terrorists build upon. What is a belief? A belief is a powerful force that once it is internalized moves almost everything else in a person's life. Beliefs define one's vision of the world, one's behavior and one's emotional responses. Beliefs are principles of action. It is through beliefs that we predict events and consider the likely consequences of our actions and therefore guide our behavior. The power beliefs have over our emotional lives is total because for every emotion we are capable of feeling, there is a belief that evokes it. What is faith? The Bible defines faith as the assurance of things hoped for, the conviction of things not seen. It seems to say that faith is entirely self-justifying. Religious faith is unjustified belief in the most important matters that we have been convinced we don't need to justify. The terrorists who committed the atrocities on September 11 have been described as men of profound (extremist) religious faith. There were serious reports that they expected to receive the very best rewards in heaven for their efforts. This is just one example of the dangers that we all face when persons do not base their actions on reason. Another example is the Inquisition which began in the year 1184 and continued in parts of the world until 1834. In the name of God, countless innocents were tortured and murdered for heresy. All the perpetrators of these atrocities were men of God including popes, bishops, friars and priests. Seeking more knowledge in our world is in a way the opposite of faith. Faith relies on unquestioned, closed mindedness. Wanting to know more about our world leaves us vulnerable to new evidence. The thing that will permit human beings to work together with open minds in making a better world is our willingness to have our beliefs modified by reasoned facts.

The End of Faith

Published by Thriftbooks.com User , 17 years ago
Sam Harris' book ties it all together. "The End of Faith" is reasonable, cogent and before its time. This is a look at a thinking future in spiritual life; one that is possible after we get our religious lives in order. On the twenty-fifth of January, 2005, Frontline, in the documentary "The Spread of Al-Quaeda" put on film and on television just what Sam Harris is talking about; Muslim Jihadists - most from the middle class - hijacked mentally by the fundamentalist Mosques, taking up the sword in response to the Koran. This same behavior happens among Christians and Jews with regard to their bible. The fault is in the dream world of scripture; it should be outlawed until it can be seen for what it is - not written by God, but flawed visions; some great poetry, some excellent ideas, but so mixed with Iron Age violence as to be a very dangerous tool indeed. Harris' hopefulness is unique. He points out that the "eastern religions" such as Buddhism have done excellent groundwork research on spiritual growth; meditative techniques that can be observed scientifically. Harris shows that strong communities, ethical concerns and issues of spirituality are natural to human beings and do not need the ignorant detritus of the past to flower among mindfull people. This book is before its time, not just because we are an age bound to scripture but because the union of eastern and western meditative spirituality has barely begun. The West's "activity" is not all bad and Harris touches on the theme when he decries "passivity" as a mode of life. An excellent book.

Published by Thriftbooks.com User , 18 years ago
This is an important book. It delves into the rightness of religious belief, supernaturalism in particular. It shows an ugly scene - religious extremism is widespread and much of our world's hurt can be traced directly to it. The author shows that religion is not a benign force - so often it is detrimental to world peace and happiness. The author's observations do not just apply to Osama Bin Laden and his ilk, but also to President Bush and like-minded evangelical Christians. What took me aback is the position that Harris is advocating - that it is okay to subject religion to careful scrutiny, in fact, it is desirable as religion is having such a negative impact on us all. He's talking about a change in social norms, attitudes, what is considered mannerly... he's saying that we can no longer afford to be respectful and tolerant of others' religious beliefs when those beliefs could do us all in. He suggests that we ask: What is the evidence for your God? I learnt that a person's religious beliefs are his own private business - every person has to work out his own salvation - and it was not for me to question these beliefs. I learned that it is behavior that counts - how we treat others and the world we live in. But in America this has flipped. Now many people talk about their beliefs, the one-on-one they have with Christ, while they indulge in the most hateful and unchristian behavior. Worse, they think their beliefs call for such behavior. Harris suggests that it is time for us to grab this nettle and challenge religion's hold on so many people. I have been researching a book on Middle East peace. I was startled to learn the role that Bible prophecy is playing in the Israeli/Palestinian conflict. The US's policy, under President Bush, has more to do with laying the groundwork for Christ's Second Coming than a careful search for justice and peace. It is amazing to me that in this day and age that Biblical writings are playing such a role in our lives. One of the factors that brought on the Dark Ages was the rise of the Christian church, the aggressive way it persecuted those who disagreed with even its most ridiculous notions. I ask if we are on the verge of a new Dark Age? Prophecy, creationism, the Bible taken literally, fear of hell fire, 2,000 year old notions on how we should live... This book helps us address this urgent question. This is also a courageous book. It is courageous as an important component of the identity, sense of self, of so many millions of people is tied to such religion. The author will no doubt endure a lot of anger from many of these people. I am thankful that he is taking this stand.
Trustpilot
Copyright © 2022 Thriftbooks.com Terms of Use | Privacy Policy | Do Not Sell or Share My Personal Information | Accessibility Statement
ThriftBooks® and the ThriftBooks® logo are registered trademarks of Thrift Books Global, LLC