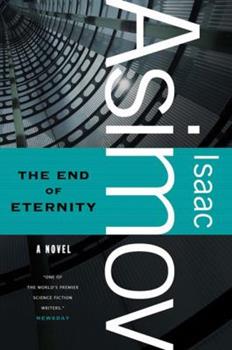 The End of Eternity

(Book #18 in the Foundation Universe Series)

One of Isaac Asimov's SF masterpieces, this stand-alone novel is a monument of the flowering of SF in the 20th century. It is widely regarded as Asimov's single best SF novel and one every SF fan should read. Andrew Harlan is an Eternal, a member of the elite of the future. One of the few who live in Eternity, a location outside of place and time, Harlan's job is to create carefully controlled and enacted Reality Changes. These Changes are small,...

Published by Thriftbooks.com User , 19 years ago
This is clearly one of the best of Asimov's works. A pleasure to read. Its a simple story of alternative reality going into non-existance when one unknown Technitian falls in love with a very special woman. The result of love is nothing unexpected except that Eternity ends clearing way to Galactic Empire which in turn switches to the Foundation. It is simply amazing how Asimov sticks to his original idea and how he introduces new perspective. In this book you will learn a great deal on time travel and all its aspects. Read it as soon as you can, the ending is really astonishing.

Published by Thriftbooks.com User , 20 years ago
The fame of Asimov's Foundation and Robot series has tended to steal the limelight from some of his other masterpieces, chief among them, The End of Eternity, a book that is hard to find. In this book, Asimov consciously set out to explore the limits of the classic paradox of time travel that has bedeviled so many works of science fiction. As a result, this is a "bare bones" novel; no robots or empires or any other such distractions. Its strength lies in imagination. Asimov looks at our world as it has evolved, and then introduces the organization called Eternity, whose mission is to protect humanity from its own mistakes, by making deft changes in key events over time (past and future). Along the way, he has fun making digs at the unchanging fundamentals of human nature (competition, drive, love) amid centuries of changing social mores. At the heart of the book is the love story of Andrew Harlan and Noyes Lambent, but this tale is just a framework for Asimov to build on. In the final analysis, Asimov is making the point that just as a child learns to walk by repeated falls, humanity's ultimate characteristic is the Schumpeterian desire and ability to innovate through risks. If we are protected from ever making mistakes, we may avoid tragedies, but the human race itself will vegetate and die. As with many of his earlier works, the dialog can be jarring and characters often one-dimensional. For all that however, The End of Eternity ranks among Asimov's finest in the field of science fiction and makes it all the more strange why this book is so difficult to find. Do take the time to lay your hands on it; you will not be disappointed.

Published by Thriftbooks.com User , 21 years ago
This short book is one of Asimov's minor masterpieces and, inexplicably, one of the least well-known of his sci-fi novels. Asimov wrote about 18 sci-fi novels, and for some reason this little book gets overlooked, probably because of the success of his Robot series, Daneel and Elijah series, and of course his epic Foundation series. However, if you want a fine Asimov read that stands on its own with an engaging plot about time travel and what you could do with that, in addition to some nice characterization, give this little gem a try.

Is it ok to "adjust" history?

Published by Thriftbooks.com User , 21 years ago
Here's an out of print book that no fan of science fiction should miss. It may be hard to find, but it's one of those REALLY worth the effort. This is the story of an institution called Eternity, which exists "out of time". Eternity takes care of shipping goods from one point in time to another, but, more importantly, "takes care" of history, as well. The people behind this institution are Observers (who collect data in different time periods), Computers (who analyze the data and determine reality changes), Technicians (who carry out computers orders to change reality), among others, all organized in a caste society. The story in this universe evolves exploring the implications of this social structure, the implications of changing history and also the effect that the actions of one individual can have on the whole system.A Technician, Andrew Harlan, falls in love with a certain woman while carrying out an assignment in a time that's not his own. As members of Eternity, Technicians and other Eternals, live "out of time", protected from the changes in history they effect. The relationship between these two people breaks Eternity's rules and what ensues can threaten its existence. So, there is a romantic component to the story, which makes the characters more palpably human and draws you in, tugging you along by your heart. However, the story goes much deeper than that and only as you turn more and more pages, the fact that this is an extremely well thought out book will become more evident.Asimov leaves ample room for your own philosophical exercises at the same time as he helps you not get tangled up in knots around paradoxes. More than just inviting you to explore a universe where reality moves along a controlled path to maximize the good of the many, he shows you the dangers of allowing that to happen. Read this if you like good science ficiton. Read this if you like a good mystery that slaps you in the face with the unexpected. Read this if you're looking for an outstanding book. Fans of the Robots, Galactic Empire and Foundation series will identify elements from that universe in this book, even if it is not directly related.

Published by Thriftbooks.com User , 23 years ago
This is one of the shortest novels Asimov has written (at least, the shortest I've read, and I've read plenty), but it packs a hell of a punch. Asimov's presentation of Eternity, an organization which exists out of time for the continual betternment of mankind, is very thought-provoking. This novel is unique among Asimov's in at least two respects: it explores (and questions) the morality of the "future" he presents (although Asimov deals a lot with morality in one form or other in most of his novels - this is one of the things I like most about reading him); and his characters are unusually human. Actually, for much of the book they are almost too human: they are often irrational and, well, dumb - as are some aspects of the world he creates. But persevere. As always, there is a reason for everything. It all comes together in an ending which will bend your mind. In short, a great read.
Copyright © 2020 Thriftbooks.com Terms of Use | Privacy Policy | Do Not Sell My Personal Information | Accessibility Statement
ThriftBooks® and the ThriftBooks® logo are registered trademarks of Thrift Books Global, LLC