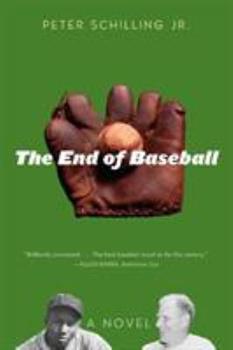 The End of Baseball

In Peter Schilling's wonderful novel, the extraordinary baseball season of 1944 comes vividly to life. Bill Veeck, the maverick promoter, returned from Guadalcanal with a leg missing and $500 to his... This description may be from another edition of this product.

When Baseball was America's Pastime

Published by Thriftbooks.com User , 14 years ago
Peter Schilling brings back the game of baseball complete with the personalities, the idiosyncrasies, the after hours stories and all of the fun that this sport once had. This is an amazing novel that just sucks you in and doesn't let go. I couldn't wait to find time every day to continue my reading. It is somewhat unique in its use of historic information and mixing of baseball story fiction. In it, Schilling has captured an era in the sport just as African Americans are beginning to be "allowed" into the game. But in this story, not just one Black ballplayer is in the Majors, an entire team is being moved up. Schilling has written an enjoyable and moving story that shows many of the great Negro League players coming together and playing in the Major Leagues on the same team: Josh Gibson and Satchel Paige among them. The antics of Bill Veech Jr. contribute to the main storyline and how the difficulties from the all White league and their overbearing Commissioner continually throw up barriers to the entry of this special team on the hallowed Fields. In addition to the game of baseball, the societal ills of the general population and the mind games of J Edgar Hoover, himself, are all part of the plot. This is a slice of Americana; America going through the pain of WWII with their boys of summer as their only distraction. Only this summer has the potential of bringing out real change for the sport. Bill Veech, Jr., is the man trying against all odds, fictitious and historic, to keep the team together against the powers of baseball and others desperately trying to keep the status quo. This is a baseball story for the ages. A terrifically different novel for anyone tired of the same old stuff. I was amazed at how perfectly interwoven truth and fiction were done by Schilling. The character studies are on target and made a part of the story blurring the lines of fact and fiction like nothing I'd ever read in the world of baseball writing. The ending is beautiful and fulfilling. I am giving it my hearty recommendation of 5 stars. There just isn't much not to like.

Great Fiction that happens to be about baseball

Published by Thriftbooks.com User , 14 years ago
I am not a baseball fan or what you would call a sports fan by any stretch of the imagination, but Peter Schilling's "The End of Baseball" is one of the most enjoyable pieces of fiction I have read in many years. Mr. Schilling knows how to engage his reader with detailed characterizations that enable his characters to escape their paper home and emerge from the pages as human beings that make you both laugh and cry -- and that's just what I found myself doing. Mr. Schilling does not talk down to his audience and his plot advances with subtlety and suspense. The story unfolds with many surprises, heartbreaks, and hurrahs. There are no gimmicks or mechanical gods to save the day in "The End of Baseball". Only genuine people trying to live through extraordinary circumstances. I give it my highest recommendation.

Published by Thriftbooks.com User , 14 years ago
Peter Schilling, Jr.'s inventive novel "The End of Baseball" describes a mesmerizing 1944 baseball season that might have been - if Bill Veeck had been able to purchase a major league team and recruit an entire team of Negro Leaguer stars. Veeck loses a leg at Guadalcanal. Before enlisting in the Marines, he had been a successful minor league baseball team owner whose innovative promotions lured fans to the ballpark and whose competitive teams kept them coming back for more. In "The End of Baseball," Veeck returns to civilian life and purchases the Philadelphia Athletics. He turns the ball club into an instant contender by secretly signing Josh Gibson, Satchel Paige, Oscar Charleston, Buck Leonard, Cool Papa Bell, Willie Wells, Roy Campanella, and other Negro League stars. The book contains many poignant moments on and off the field. To his credit - and to our good fortune! -- Schilling provides the historical and social perspective the story demands. He captures the essence of the men and the game they play for life and, perhaps, death. In real life, Veeck owned the Cleveland Indians and signed the American League's first black player, Larry Doby, and also Satchel Paige. He had less talent to work with on his St. Louis Browns ball club, so he grabbed the spotlight by sending a midget to the plate. When he owned the Chicago White Sox, Veeck put player names on the backs of uniforms and introduced the exploding scoreboard. He was elected to the Baseball Hall of Fame in 1989.

Excellent novel, whether you're a baseball fan or not

Published by Thriftbooks.com User , 14 years ago
This book has it all: the high drama of a "what if?" season of baseball, historical cameos, and real social commentary. If you're looking for an always-entertaining page turner, look no further. The End of Baseball simulates what it's like to be swept up in a particularly thrilling baseball season in 1943, and reading it is like having a spot in the bleachers to watch the team that almost was. It has subtle character studies, and closely observed details that summon up that time and place: America as a country in the midst of WWII, the African American baseball community prior to Civil Rights. It will keep you up nights reading!

A good summer read for fans of baseball, history, and great storytelling.

Published by Thriftbooks.com User , 14 years ago
I do not consider myself a baseball fan, but this is a superlative read. Peter Schilling's electric account of what might have been had Bill Veeck managed to integrate a major league baseball team in 1944 is full of vivid characters and amazing events. Schilling relates his story so energetically that it's almost as if you were there in the park.
Trustpilot
Copyright © 2022 Thriftbooks.com Terms of Use | Privacy Policy | Do Not Sell My Personal Information | Cookie Preferences | Accessibility Statement
ThriftBooks® and the ThriftBooks® logo are registered trademarks of Thrift Books Global, LLC