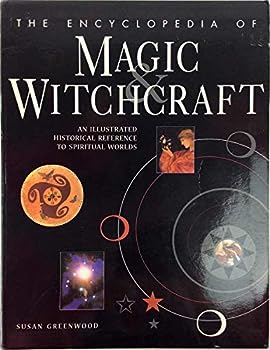 The Encyclopedia of Magic Witchcraft

We receive 29 copies every 6 months.

This description may be from another edition of this product. Magic has played a part in most cultures throughout human history. Traditions and practices may differ but the essential elements remain the same. This insightful history examines the roots and...

Published by Thriftbooks.com User , 3 years ago
This was the first book I bought off here. Came in a week or so after and it was of good quality. The pictures Greenwood uses are colorful and compelling, while beside them she explains her topics clearly but in a brief way so that it wasnt overpowering, unlike a textbook. Very good information in it as well. 10/10 would recommend

Published by Thriftbooks.com User , 12 years ago
This book has plenty of nice, color photographs. It provides a brief overview and history of various topics, in a simple, interesting style.

A MUST for anyone interested in witchcraft and magic

Published by Thriftbooks.com User , 15 years ago
This book is a must-read for anyone interested in witches, witchcraft, magic, and spirituality- from every era in time, and every continent on earth. It doesn't matter if your a beginner to this type of subject, or if your already a practicing Wiccan, occultist or 'Witch.' I've been a practicing Wiccan for seven years, and still learned a very large amount of information from this book that was completely unknown to me. The following are the contents of this book: Magic in Myth, Religion and Science- What is magic? Shamanism Magic and Religion Science and Magic Witches and Supernatural beings- What is Witchcraft? The Classical World The European Tradition Origins of European Witchcraft The World of Fairies African Witchcraft Native American Witchcraft Early Modern Witchcraft- How Witchcraft Developed Witchcraft in Popular Culture Witches, Spirits and Familiars Old Wives Tales Healing and Sympathetic Magic Famous Witches The Aristocracy and Magic Reginald Scot and Witchcraft Witch Hunts- How Witch Hunts Began- The Devil's Role Heretics The Legalities of Witch Hunting Witch Hunters The Reformation The Geography of Witch Hunts The Ending of Witch Hunts Modern Magic- How Magic Survived The Myth of Atlantis The Tarot Magical Societies Aleister Crowley Dion Fortune Today's Witches- Gerald Gardner The Goddess Celebrating Nature Doreen Valiente Alex Sanders Raymond Buckland Hereditary Witchcraft Feminist Witchcraft Western Magic Today- Today's Magicians Western Mysteries Druidry The New Age Western Shamanism The Northern Tradition Satanism Chaos Magic This is just skimming the surface of what is in this book- It also features an overview of magic and witchcraft in different cultures including Japan, India, Korea, China, England, Ireland, Germany, Iceland, Egypt, Italy, Greece, Scotland, Israel, Tibet, Australia, France, Switzerland, America, Scandinavia, and Eastern Europe, among others.

Good Introduction to the History of Magic and Witchcraft

Published by Thriftbooks.com User , 18 years ago
The "Eycyclopedia of Magic and Witchcraft" is an excellent illustrated introductory history of magic, witchcraft, and the occult. It is by far one of the best I've seen. It is intended for those who presumably have little background in these subjects, but is just as enjoyable for anyone already aquainted with magic and the occult. It traces the history of magic and spiritual beliefs from prehistory to modern times, highlighting a number of important topics along the way. The book begins with an introduction to shamanism and other early magical beliefs from which all others would evolve over thousands of years. It highlights magic in the anicent and classical worlds, particularly Egyptian, Greco-Roman, Celtic, and Northern European beliefs. It investigates the role of magic and witchraft in the rise of ancient and modern religions such as Christianity, Islam, Buddism, Hinduism, and Shintoism, as well as the role of witch doctors and magic healers throughout history, well into modern times. It also addresses the influence of magic on science and how magic, science, and religion are more closely related then many might think. It devotes an entire chapter to the history of the European witch hunts from 1450-1750 and the various impact magical beliefs played in accusations of witchery. It also devotes several sections to the idea of high magic and alchemy and its links with NeoPlatonist philosophy. The last few chapters of the book deal with modern magic and witchcraft history and beliefs, particularly Neo-Paganism and Wicca, but also address other issues as Satanism, Druidry, and modern shamanism. The book is objective in its history and does not succumb to the polemic pitfalls of many other histories of this kind. Though this is only a lightly treated intro to this subject, it is one that I highly recommend.
Copyright © 2020 Thriftbooks.com Terms of Use | Privacy Policy | Do Not Sell My Personal Information | Accessibility Statement
ThriftBooks® and the ThriftBooks® logo are registered trademarks of Thrift Books Global, LLC