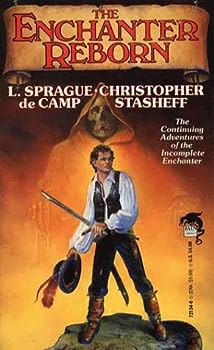 (Book #4 in the The Incompleat Enchanter Series)

This description may be from another edition of this product. Two of SF's most acclaimed authors collaborate with John Maddox Roberts, Holly Lisle and Tom Wham to bring a whole new life to Professor Harold Shea and his band of not-so-merry companions in the...

Published by Thriftbooks.com User , 12 years ago
After he and Prof. Reed Chalmers learned how (in The Incompleat Enchanter) to use symbolic logic to travel to parallel universes where magic worked (deCamp was one of the first authors to articulate such an idea), Harold Shea, Ph.D., not only wooed and won Belphebe, the huntress-character from Spenser's The Faerie Queene (Penguin Classics), but was the only one of four researchers to decide to return home to Ohio. In this volume, deCamp, Christopher Stasheff (who contributes a very interesting preface as well), Holly Lisle, and John Madox Roberts team up to provide further parallel-magical-universe adventures for Shea and his gone-native colleagues, particularly Chalmers (who has married Florimel, another Spenserian character, and is learning to be a magician) and Walter Bayard (who joins the Druids of Eriu, the world of Irish myth). Five stories are included, one of which (deCamp's "Sir Harold and the Gnome King") was formerly published in chapbook form. In the first, Stasheff's "Professor Harold and the Trustees," Shea must work out a way to ensure that his colleagues get back in touch with him at intervals, or else lose college funding; en route to this goal, he, Belphebe, and Chalmers find themselves battling a hydra which has trapped their goof-prone friend Vaclav "Votsy" Polacek in a cave. In the second ("Gnome King"), Shea needs to get the use of the Gnome King's Magic Belt, so he travels to the reality of L. Frank Baum's Oz books (with a brief stopoff at the University of the Unholy Names in Dej, whose derivation is unclear), and helps rescue Ozma's son Oznev, who has been taken prisoner by the King's successor. This requires getting the former King himself disenchanted from his current form (a potted cactus) because he's the only one who can scope out the way into his realm, but it works out, because during his vegetative state he's had a change of heart. In "Sir Harold and the Monkey King" (also by Stasheff), Shea and Chalmers, trying to find Florimel after she attempts a journey on her own, visit the mythic China of the classical epic Journey to the West (4-Volume Boxed Set), and there join Sun Wukong, the Monkey King, and the Buddhist monk Tripitaka on a perilous pilgrimage to India, and Shea ends up in a philosophical debate with Lao-Tzu in Heaven. In Lisle's "Knight and the Enemy," the two friends follow the trail to the world of Don Quixote's delusions, where the Lord of La Mancha is everything he envisions himself, and where, rather to Chalmers's horror, all magic-users are conisdered enchanters and draw their powers from Hell. Here they discover that Florimel has been abducted by Quixote's old adversary, Malambroso, and in pursuing him they wind up (in Roberts's "Arms and the Enchanter") in the Universe of Virgil's The Aeneid (Penguin Classics Deluxe Edition), voyaging the Mediterranean with Aeneas and his Trojan refugees. DeCamp was noted for his scholarship regarding the ancient world (besides sf he wrote at least four

Published by Thriftbooks.com User , 15 years ago
L. Sprague de Camp and Fletcher Pratt created one of the most influential stories in fantasy. The stories of Harold Shea in THE INCOMPLEAT ENCHANTER was the first glimpse of fantasy written for adults with a system of magic that followed rules (something we might take for granted today). But these stories were more than just the first. They were also some of the best. Well, after running into the gods of Norse and Finnish myth, Spencer's Faery Queen and other places of imagination, Harold Shea is back in a whole new set of adventures. L. Sprague de Camp has been joined by Christopher Stasheff to create the new Harold Shea stories. In the new volume Harold starts out in an adventure penned by Stasheff where he goes up against one of his toughest opponents, the Board of Trustees, as he must justify the absence of himself and his companions and still maintain his job. A good dose of reality that helps to root the series as a whole. Harold then travels to the land of Oz in a story by de Camp. Harold appeals to Ozma to use the magic belt stolen from the Gnome King (yes, I know Baum spelled it Nome and they aren't related to the Gnomes but de Camp made the change). For the service Harold must agree to rescue the royal prince from the Gnomes. The next adventure is another Stasheff story with Harold joining his colleague Chalmers in a search for Chalmers's wife who accidentally jumped to another wheel using the sylogismobile. Shea and Chalmers wind up in the world of the Monkey King and must solve the King's problems before they can continue on their way. Their next stop is in a story by Holly Lisle based on an outline by de Camp and Stasheff. The pair find themselves in the world of Don Quixote but not the one described by Cervantes, but the one Don Quixote inhabits in his mind. An evil sorcerer (is there any other kind?) has Chalmers's wife and Shea must figure out the local magic if they are to rescue her. Shea and Chalmers are then cast to the world of Virgil's THE AENEID. The pair join Aeneas in his quest to found a new city after the fall of Troy. This story is by Karl Edward Wagner and is based on an outline by de Camp and Stasheff. Now Harold and Chalmers run afoul of the Roman versions of the Greek gods but they do find Chalmers's wife. The end has them opening their eyes on yet another new world. The stories in this volume are well written but there is a small problem with continuity. Shea's ability to perform magic varies greatly but is consistent within each story. I was a little miffed at de Camp changing L. frank Baum's Nomes to Gnomes. Baum did not intend the Nomes to have any relation to Gnomes of other myths and legends. His purpose with Oz was to create a brand new American mythos. Other than that I found the volume to be very entertaining and do recommend it to anyone who has read the original collaborations. Harold Shea's adventures continue in THE EXOTIC ENCHANTER.

Published by Thriftbooks.com User , 21 years ago
I have yet to read another author who tells a great story mixed with humor like De Camp.Although, he is lesser know than some of his peers (Clarke, Asimov, and Hubbard)he has been every bit an influence to the evolution of science fiction / fantasy. The Enchanter Reborn is proof that De Camp has still a great deal of writing left in him. It is every bit as enjoyable as the first book in this series. Harold Shea returns in his role of bumbling adventurer as De Camp takes him through more worlds of myth come to life. Filled with surprising twists and De Camp's humorous delivery. The Enchanter Reborn is the perfect book for someone who wishes to escape our everyday world and dive into something with wit, humor, and of course adventure.
Copyright © 2020 Thriftbooks.com Terms of Use | Privacy Policy | Do Not Sell My Personal Information | Accessibility Statement
ThriftBooks® and the ThriftBooks® logo are registered trademarks of Thrift Books Global, LLC