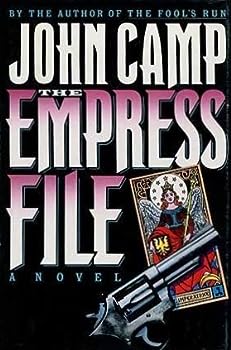 (Book #2 in the Kidd and LuEllen Series)

by John Camp and John Sandford

This description may be from another edition of this product. The ultimate con game thriller from the bestselling master of suspense, featuring the con artist team of Kidd and LuEllen.

Published by Thriftbooks.com User , 14 years ago
it is a good sanford book but it is easy to tell that it was wrote 20-30 years ago by the products in the story, but as all sanford novels a good read

Published by Thriftbooks.com User , 20 years ago
Kidd, master computer hacker, and LuEllen, master burglar are hired by a local action committee to discredit the mayor of a small Mississippi town. The mayor is corrupt, along with the group of selectmen who govern with her and the honest people in town want to take their town back. Kidd and LuEllen swing into action but things go wrong and two of the honest folk are murdered. And then Kidd himself is captured. Will he die in the dreaded vacuum chamber or will LuEllen be able to rescue him before it's too late.The Kidd and LuEllen novels were originally written by John Sandford under his own name, John Camp, and as such pre-date his more successful "Prey" novels. The Kidd novels are just as good if you can overlook the outdated computer technology Kidd uses (that was cutting edge when the novels were written). The writing is great, characterization is right on and the dialog sparkles. As others have suggested read "The Fools Run" first to get a little background on both Kidd and LuEllen. I'd recommend this book.

Published by Thriftbooks.com User , 22 years ago
This author is very talented. Kidd and LuEllen are back in the saddle again (read The Fool's Run first). The plot was well thought out and consistent. The action keeps drawing the reader along. Hopefully, there will be more of this series (can two books make a series?). More of a con game than a mystery thriller, this book and the Fool's Run are just as good as the Prey series. Encore.

Published by Thriftbooks.com User , 24 years ago
If you like computer mysteries, this book is for you. It's amazing the things that these two characters, Kidd and LuEllen, go through just to hack a computer. John Sandford demonstrates in his "Prey" series that he's a good suspense writer. In this book and the previous one in the series, The Fool's Run, he also shows he has a great sense of humor. Thanks for a fast, fun and intelligent read

Published by Thriftbooks.com User , 24 years ago
This was one of the best books I've ever read. First you should read THE FOOLS RUN, which is equally as good. That introduces the main characters, Kidd and LuEllen. Kidd is a painter/tarot card reader/computer hacker who happens to be the main character. There isn't a whole lot to say about this book. The dialogue is great, and the book is highly original. If you're familiar with his Prey novels, you will like these books, even though they are not really in the same category as the Prey books
Copyright © 2020 Thriftbooks.com Terms of Use | Privacy Policy | Do Not Sell My Personal Information | Accessibility Statement
ThriftBooks® and the ThriftBooks® logo are registered trademarks of Thrift Books Global, LLC