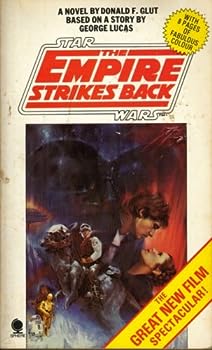 THE EMPIRE STRIKES BACK

This description may be from another edition of this product. A long time ago in a galaxy far, far away, Luke, Han, and Princess Leia's story didn't end with the destruction of the Death Star.... Though they had won a significant battle, the war between the...

Published by Thriftbooks.com User , 20 years ago
c-mon! It's starwars, need I say more? I don-t need to, I know. Having star wars on the cover is worth 4 stars at the least, so... Being a good book and an exellent novelization of my favorite movie, it deserves 5000.May the Force Be With You

Published by Thriftbooks.com User , 22 years ago
I bought this CD box (with the first Star Wars radio drama included) four years ago, thinking: 'Oh, 13 CDs, there's probably a lot of material not in the movie...' I was right. Production is awesome. Considering the new scenes only, it's a must for any Star Wars fan, but anybody can enjoy this radio drama: it's full of tension, conflict and great acting.

So you think you've heard the whole story..Well listen again

Published by Thriftbooks.com User , 22 years ago
I really enjoyed the whole Empire Strikes Back radio drama. Soundeffects adapted from the original movie mixed together with actors who really know how to let you 'Feel The Force' while listening to the story.Great !

All the excitement of the movie!

Published by Thriftbooks.com User , 22 years ago
Being that the Empire Strikes Back is my favourite of the Star Wars movies, I just had to read this book. It won't disappoint Star Wars fans, with all of the energy of the movie. I liked how it wasn't a complete adaption of the movie, with different things taking place on Dagobah. I would recommend this book to any science-fiction or fantasy fan.

A wonderful radio adaptation of the film.

Published by Thriftbooks.com User , 23 years ago
The second part of George Lucas' famous STAR WARS saga comes to radio, and it's well worth the wait. Mark Hamil, Anthony Daniels, and Billy Dee Williams are on hand to reprise their film roles, and they are ably supported by Brock Peters, Ann Sachs, Perry King, and John Lithgow (as Yoda). The 10-part script takes the time to flesh out the characters and the setting, making the saga appear more real than ever. After hearing THE EMPIRE STRIKES BACK on audio, you just might be tempted to get rid of your video copy--it's really that good! So start up the cassette player, and journey to a galaxy far, far away.
Copyright © 2020 Thriftbooks.com Terms of Use | Privacy Policy | Do Not Sell My Personal Information | Accessibility Statement
ThriftBooks® and the ThriftBooks® logo are registered trademarks of Thrift Books Global, LLC