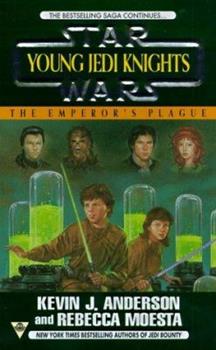 Bornan Thul's secret is out: he's protecting a deadly plague that could devastate the galaxy if released. And the evil Nolaa Tarkona--leader of the Diversity Alliance--knows where it is hidden. Now... This description may be from another edition of this product.

What a good book.

Published by Thriftbooks.com User , 21 years ago
I am a fan of star wars espesially the books.This set of books is one of the best I've read so far.I like them all but I think the best part in this one is the surprise ending wich is very funny.But I think they should be read in order.Other wise your in the dark for have the book!But these books are my favorit yet.Thank you for your time.

An excellent conclusion to the second storyline in the saga

Published by Thriftbooks.com User , 22 years ago
Since I am rereading this entire series for the first time in several years I was surprised to realize I remembered almost nothing about this book despite the fact that it is the climax of the series. This does not however, in any way imply a lack of excitment. In fact it was solidly gripping from page one right to the end. This book was the last in the second cycle of Young Jedi Knights novels, and it was one of the best. It basically takes up right where the previous book left off, with the kids, now fully healed, preparing to meet with the senet to discuss the possible threat the Diversity Alliance may be posing to all human life in the galaxy. Meanwhile Zekk goes to find Bornan Thul and takes Raynar with him because Raynar is Bornan's son and he would be more likely to trust him if he is with him. They discover the human plague secret so Leia sends them (Zekk, Bornan, Raynar, Jacen, Jaina, Lowie, and Tenel Ka) on a mission to go and try to destroy the plague storehouse before the Diversity Aliance can get to it and destroy all human's with it. The rest of the book is an intense account of their adventures trying to accomplish this goal, but as to whether they succeed or not, well, you'll just have to read the book, because I'm not telling! I will say though, that it has several unexpected twists, one of which is very sad. One of the few problems with this book is that Leia would knowingly send her children on such a dangerous mission. Despite the fact that they are almost full Jedi Knights, that doesn't change the fact that they are her children, and I don't believe any parent would willingly send their child into such mortal danger. My parants definitely wouldn't! I must admit, I am getting slightly less resentful of all these irritating little couples that are forming (Jacen and Tenel Ka, Jaina and Zekk, Lowie and Raaba, and of course Lusa and Raynar). Jacen and Tenal Ka are funny and interesting, and I have no objections to them liking each other, and Lowie and Raaba are plausible, though boring. Jaina and Zekk are hugely boring though, and Lusa and Raynar are completly implausible. Even so, this was not overpoweringly bad, so I guess I really have nothing to complain about really. In short, this is an excellent series of Star Wars books that are better even then some regular books I've read, and certainly more exciting.

Exciting, Intriguing, and well worth the money!

Published by Thriftbooks.com User , 23 years ago
Hmm... the title pretty much says it all, i guess. I enjoyed the suspense and it's actually well-written!

For anyone who likes suspense, action and Jedi Knights.

Published by Thriftbooks.com User , 23 years ago
I read this book. It's excellently written, very sci-fi, and once you start you just can't stop.In this book, Zekk and Raynar go to search for the missing Bornan Thul. Bornan is protecting a deadly plague and weapons depot. There is enough plague in the place to kill every living creature in the entire galaxy. Zekk and Raynar finally reach Bornan, only to find that he is cornered by bounty hunters Shakra and Boba Fett. Bornan puts the ship into self- destruct, grabs his navicomputer holding the coordinates to the depot, and jumps into his escape pod. But, before the ship blows, Boba Fett successfully slices into Thul's computer and takes information form the ship's log. Then, he returns to Nolaa Tarkona, the leader of the diversity alliance, and leaves.Jacen and Jaina Solo, Tenel Ka Chume Ta'a Djo, and Lowbacca join Zekk, Raynar and Bornan and make it to the weapons depot. They must use mines and other bombs to blow up the depot before Nolaa Tarkona reaches it.At the end, there's a BIG surprise so you'll have to read the book or I'll give it away. Anyone Who is willing to read a book 2 cm thick and thinks they can handle it is more than welcome to read it !

Words cant express how GREAT this book is.

Published by Thriftbooks.com User , 24 years ago
I love the young jedi knights series.I mean love them.And this book keeps up to the action of the series and Jacen and JAina's adventures.I wish though that Zekk had kissed Jaina when he had the chance.and I thought it was hilarious that Head Strong Tenel ka made the first move on Poor unsuspecting Jacen Solo.Also I thought the book was sad because just as Raynar finds his father,his father is killed by the very plague he worked sohard to protect.But I loved it (duh!)and I really recommand this book.Run out and buy it.You wont be dissappointed!
Trustpilot
Copyright © 2022 Thriftbooks.com Terms of Use | Privacy Policy | Do Not Sell My Personal Information | Cookie Preferences | Accessibility Statement
ThriftBooks® and the ThriftBooks® logo are registered trademarks of Thrift Books Global, LLC