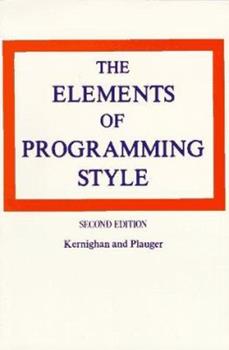 Published by Thriftbooks.com User , 13 years ago
The Elements of Programming Style, by Brian W. Kernighan and P. J. Plauger, is an influential book on the study of computer programming styles and languages. It endorses the strategy that computer programs should be written not only to satisfy the compiler, but also keep the human readers in mind. The book utilizes examples taken from actual, published programs. The book's recommendations are made in the context of the examples which are realistic rather than an academic vacuum.

Some good rules for us all, still valid after so many years

Published by Thriftbooks.com User , 16 years ago
I think this little book is still relevant today, over thirty years after it first appeared. Yes, some people claim that computer programming is taught a little better today, and we all learn better habits. Actually, I'm not sure how true that is. People may be better at telling kids how to tidy up their rooms, but I've seen some rather messy rooms! And people may say that FORTRAN and PL/I are absurd languages to use as examples today. I'm not so sure about that. As a programmer, you may very well see old and confusing programs written in either language, especially FORTRAN. And anyone who can program in more modern languages ought to be able to read the programs. It's easy to read, it's still interesting, and it raises some issues of style that are worth thinking about. Strunk and White (The Elements of Style) is still worth reading. And so is this.

All programmers should buy this book

Published by Thriftbooks.com User , 20 years ago
I firmly believe that computer programming is a craft, perhaps an art but certainly not a science. As you learn the craft you need to learn the wisdom of those that have gone before you. This book becomes essential.It spells out, first with a counter example found in a piece of code published elsewhere and then with the code rewritten, over 70 pearls of wisdom that should be engraved into our consciousness; for many years every morning when I logged on to start work as a commercial Unix programmer one of these rules was randomly chosen as my message of the day, if I didn't understand the short rule I dragged out the book and refreshed my memory.Brian Kernighan has co-authored three books almost essential to learning our craft, this volume, "Software Tools" and "The Unix Programming Environment". "Elements of Programming Style" spells out the fundamental rules, "Software Tools" shows you how to apply them to a number of simple projects and extends the rules to software design and finally "The Unix Programming Environment" shows you how to use them in an operating system designed to reward you for your effort.The examples in either PL/I or Fortran expound the simple rules clearly and expertly in a manner typical of Kernighan's writing. That the languages used are old and most of the rules long accepted lore are not a drawback to this volume. Anyone who knows C, Pascal or even Perl should easily understand the code and programmers turn out code just as bad today in any number of languages.These things make this book highly recommended reading for anyone who wishes to call them self "programmer." A final word of warning, don't lend this book to anyone, you'll never get it back - I've bought four copies so far.

The examples are dated but great background material

Published by Thriftbooks.com User , 20 years ago
As the name implies, this is about the elements of programming style. The examples are a bit dated (old languages, not C/C++/Java/the-next-great-language). But this isn't a *language* programming book, it is about how to write good programs in any language.

Published by Thriftbooks.com User , 20 years ago
Published in 1978. 168 pages. These 77 rules represent the definitive basis of good programming style and best programming practices. Included in this famous set of rules are gems such as "say what you mean", "write clearly", "use the telephone test", "make sure comments and code agree", and "make it right before you make it faster". Each rule is described in the context of a small program or code fragment. The authors expertly illuminate their rules by correcting these deficient programs. All of the example code in FORTRAN or PL/I was taken from prior publications. The rules are programming language independent (76/77); the only exception is "avoid the FORTRAN arithmetic IF." This book solidified many of the ideals expressed in the structured programming movement.
Copyright © 2020 Thriftbooks.com Terms of Use | Privacy Policy | Do Not Sell My Personal Information | Accessibility Statement
ThriftBooks® and the ThriftBooks® logo are registered trademarks of Thrift Books Global, LLC