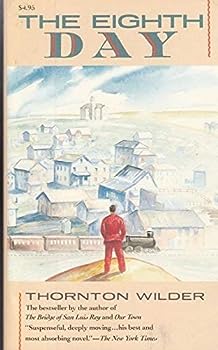 This description may be from another edition of this product. Thornton Wilder's renowned 1967 National Book Award-winning novel features a foreword by John Updike and an afterword by Tappan Wilder, who draws on such unique sources as Wilder's unpublished...

This is it: the Great American Novel

Published by Thriftbooks.com User , 12 years ago
Until I had some time on my hands not many good books (read "high-profile") to read in English for entertainment while living overseas, and _The Eighth Day_ came through my hands, Thornton Wilder was just "a 20th century middle american white male traditionalist," to me, a result of over-exposure to the clinically edited versions of "Our Town," presented to us in school and on the big and small screens. The title itself, "The Eighth Day," confounded me and caused me to bypass the book whenever I saw it, thinking it was "a war novel," confusing it with "The Longest Day." I settled down to give it a go and was unable to put it aside. When I finished reading it, I said -- as it encompassed so many places with a unifying sense of metaphysical connections -- "Look no further. This is it: The Great American Novel. I don't know what the fuss has been about, 'oh who could we pick?'. . . 'it has not yet been written. . .' Clearly it has been, and has been languishing on library shelves throughout all the bloodless PG-PC interpretations of "Our Town," to which we have been subjected, all in the hopes that the bland versions introduced to us we intrigue us enough to read more on our own. "Our Town" has been presented as our 'been there, done that' exposure to Thornton Wilder:'" a grave disservice, perhaps an intentional burying of a thoughtful, perceptive, and persuasive -- not to mention very very hip -- author under layers of one-size-fits-all theatre. If you haven't read it, do. It is the kind of book that comes back in bits and pieces -- in scenes remembered as one's own experiences are -- over the years. Looking at the reviews here already, I was surprised to see that all of us who thoroughly enjoyed reading this book have such close similarity of responses: "candidate for great american novel," "sadly neglected," "memorable," inspiring . . . . It is a book that is hard to describe, as it is an experience that takes hold in the reader, an experience of scenes we think perhaps were ones we have been in, somewhere, sometime, or of which we have somehow a deeply felt/remembered knowledge. I don't read many American authors, preferring British authors with a mention for the Booker Prize. Thornton Wilder does it for me -- perhaps closest to Somerset Maugham, yet wholly American (and here we should not be envisioning a flag-waving bumper sticking "patriot"). It is that part of what is really American (forget the pumpkin pies and turkey) that survives in spite of all efforts to eradicate its soul. The title, _The Eighth Day_, becomes easier to remember and less likely to be confused with "a war novel" when we consider that yes, "on the seventh day, God rested," and all time since then has been the Eighth Day of creation, one in which man -- Kerouac's "Desolation Angels" -- is to be making the most of what has been given him to work with, his purpose in living, acting, working, as another put it, to define God to himself.

Published by Thriftbooks.com User , 15 years ago
Set in a dismal Illinois coal town around the turn of the twentieth century, resident John Ashley is accused of killing Breckenridge Lansing, the money-grubbing, incompetent owner of the coal mine; he is found guilty and sentenced to be executed. But on his way to prison, he is suddenly rescued by six unidentified men and set free. He makes his way to Chile, puts his engineering background and love of mathematics to good use, and eventually makes his way back to the US. Ashley becomes a "man of faith," that faith being defined as a belief in a better, more caring, American community. (A new beginning = the Eighth Day.) One character says, "The [human] race is undergoing its education. What is education? It is the bridge man crosses from the self-enclosed, self-favoring life into a consciousness of the entire community of mankind." The "heroes" of the novel are those who defy the conventions that would keep them from crossing that bridge (Lily Ashley pursues a career as a singer, defying Victorian conventions) and those who wash their hands of the filthy pursuit of materialistic well-being (Roger Ashley becomes a muckraking journalist in Chicago eager to help the poor). The truth of John Ashley's innocence of the crime is revealed at the end (though Wilder tells us he's innocent in the Prologue). An annoying feature of the book is Wilder's blunt moralizing, especially near the end; characters are forced to make these little speeches about "false hopes" and "people changing" that make them suddenly appear remote and snobbish. (I'm not criticizing the message here, only Wilder's methods.) Wilder holds out a great deal of hope for the future of America, though he believes the road ahead is perilous with lots of false turns possible. This is his most ambitious novel, and it won the National Book Award in 1968.

Published by Thriftbooks.com User , 21 years ago
This novel was given to me by a friend and lover years ago, and remains one of the books that has moved me more than any. As he does in his better known works, Wilder manages to touch his reader deeply with the complexity of the human spirit, move us to tears without ever resorting to sentimentality. A powerful exploration of the "American Individual", the family, love and man's search for self and meaning. A must read, and a generous gift to those you love. One cannot help but reach within one's self and do a bit of soul-examining while/after reading this book. Haunting, inspiring and memorable.

Published by Thriftbooks.com User , 21 years ago
This is one of my very favorite novels, and it breaks my heart to see just how few people have heard of it. The engrossing storyline, brilliant characterizations, and Wilder's beautiful writing style make this a joy to read. I recommend it to everyone.

Published by Thriftbooks.com User , 21 years ago
The Eigth Day is as an engrossing and poignant examination of the human condition as I have ever encountered, presenting the struggles of decent people in an unpredictable and sometimes cruel world. Here we find brilliantly conceived and inspired characters, painted in Wilder's elegant prose--his ideal Americans, proven worthy of praise through the tests of fire. The journey crosses decades and continents and in the end the reader feels that they have traveled through more than a clever story, but through the hearts and souls of a remarkable family.
Copyright © 2020 Thriftbooks.com Terms of Use | Privacy Policy | Do Not Sell My Personal Information | Accessibility Statement
ThriftBooks® and the ThriftBooks® logo are registered trademarks of Thrift Books Global, LLC