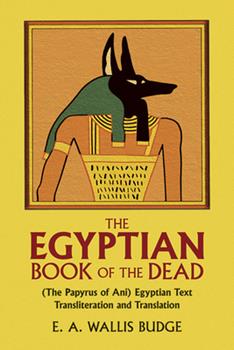 The Egyptian Book of the Dead

"The Egyptian Book of the Dead" is unquestionably one of the most influential books in all history. Embodying a ritual to be performed for the dead, with detailed instructions for the behaviors of the disembodied spirit in the Land of the Gods, it served as the most important repository of religious authority for some three thousand years. Chapters were carved on the pyramids of the ancient 5th Dynasty, texts were written in papyrus, and selections...

Ian Myles Slater on How to Succeed in the Next World

Published by Thriftbooks.com User , 19 years ago
It would hardly seem necessary to add another review, but it seems it would be helpful to make a few things clear. "The Book of the Dead" is not, as some reviewers seem to think, a (not very good) encyclopedia of Egyptian life. Nor is it a compendium of mythology (the narrative content is remarkably small). Nor is it (an early but durable misconception) "the Egyptian Bible". The name applies to a number of collections of spells, prayers, hymns, and instructions (the contents varying from copy to copy, and over time), which were included in tombs. They were intended to assist the deceased in achieving a happy existence (and avoiding destruction) in the afterlife. The contents are, in this context, quite utilitarian. To the Egyptians it was "Coming Forth by Day" (as a glorified spirit), and those who could afford it commissioned beautifully executed copies as essential equipment for their long-term future. Many copies, including the Papyrus of Ani, included numerous illustrations (some exquisite) of major and minor gods, the intended owner and his family, and scenes of the (very earthly) Next World. The collection emerged from earlier bodies of tomb and coffin literature during the New Kingdom, and versions continued to be produced into Roman times. This particular edition reproduces (beautifully) the color edition of the New Kingdom "Papyrus of Ani" published by the British Museum in 1890. That version was edited by E.A.W. Budge -- who had purchased the scroll in Egypt -- in collaboration with another Victorian-era Egyptologist, Le Page Renouf. This modern presentation is actually an improvement, since computer manipulation has allowed the rejoining of material which Budge arbitrarily separated when preparing the brittle papyrus for shipment by pasting sections on wooden blocks. (The papyrus has, inevitably, deteriorated since it was unrolled. The few modern reproductions of images from it which I have seen were a letdown after the early descriptions. James Wasserman's Preface, which mentions this problem, refers to photographs in an Egyptological series, which I have not seen.) That first edition was always rare and expensive, and hardly ever available today, and then at a very high price indeed. It was followed in 1895 by a popular edition, prepared by Budge, containing the text in a hieroglyphic transcription, interlinear transliterations and translations, a more polished translation, and an elaborate introduction and other apparatus, including supplementary material from roughly contemporary texts, and some black and white line-drawing versions of the illustrations. This latter edition has been reissued for decades by Dover Publications, and at first glance it looks like a wonderful bargain. The arrangement looks promising, and the hieroglyphic font was a brilliant example of nineteenth-century design. Unhappily, Budge was not only writing in the nineteenth century, he was already behind the times even then. His transliteration is utterly o

Great for Beginners; Refreshing New Translation for All

Published by Thriftbooks.com User , 19 years ago
The translations in this book incorporate the symbolic meaning of the texts. Here is an example given by Dr. Seleem: A sentence from the text, if translated literally without consideration of the symbolic meaning, would read: "I am pure in my great double nests, in the city of Sutnny, in the day where the people gave offerings to the great principle in it." This translation is not only hard to understand, but misses the deeper meaning completely. However, if we look at the same sentence and consider its symbolic meaning we will obtain the following translation: "I achieved purification of my body and soul in the time of my youth, when other people were busy with the dazzling illusion of life." Dr. Seleem not only gives us a refreshing, new and insightful translation, but also includes valuable commentary. Included in this book is the entire Papyrus of Hunefer, and extracts from the Papyrus of Ani, the Papyrus of Enhai, the Papyrus of Gerusher, and the Negative Confessions of the Papyrus of the Royal Mother Nezemt. Dr. Seleem has also divided the translation into numbered sentences for easy reference and includes a glossary. This book is essential for understanding the True Spiritual meaning of literal translations of the texts.

Published by Thriftbooks.com User , 21 years ago
This book is an outstanding translation and presentation of the books that make up the Papyrus of Ani. Faulkner is far superior to Budge, and this book proves it out. In addition to the beautiful pictures and fine translations, the commentaries in the back, along with the explanations of the vignettes contained in the papyrus are well worth the money. A must for anyone interested in Ancient Egypt and their culture.

Published by Thriftbooks.com User , 25 years ago
Taken directly from the papyrus of Ani, an Egyptian scribe, The Egyptian Book of the Dead is a great collection of hieroglyphic information. Everything about the passage into the underworld is described in detail. Not only that, you can also learn some of the Egyptian hieroglyphs as y ou read along with Ani. Give this book a toss in your shopping cart , all you lovers of Egyptian myth and culture
Trustpilot
Copyright © 2022 Thriftbooks.com Terms of Use | Privacy Policy | Do Not Sell or Share My Personal Information | Accessibility Statement
ThriftBooks® and the ThriftBooks® logo are registered trademarks of Thrift Books Global, LLC