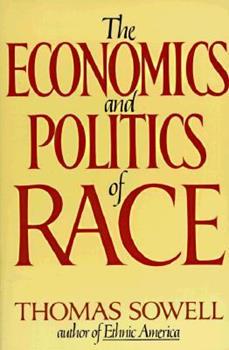 The Economics and Politics of Race: An International Perspective

[MP3CD audiobook format in vinyl case.] [Read by Robert Morris] How much of a racial group's economic fate is determined by the surrounding society it lives in, and how much by internal patterns that... This description may be from another edition of this product.

Many Unpleasant truths for both Blacks and Whites

Published by Thriftbooks.com User , 13 years ago
This book is probably the fullest expression of Professor Sowell's economic philosophy of how race impacts American culture at both ends of the class spectrum, and across both sides of the racial divide. One does not have to agree with him to acknowledge that most of what he says carries weight, and although not entirely unencumbered by ideological concerns, his views are always transparent so that a reader is free to examine them and then accept or reject them as he sees fit. What is most refreshing about them is that Sowell does not try to rationalize or excuse white racism, or even blacks dependence and other self-destructive behaviors. His argument basically is that a free-market economy and a free-enterprise culture will take care of these excesses on either side of the racial divide if allowed to operate in a normal and unfettered way. Given the sorry state of black cultural orthodoxy in which dependence on pseudo-religion, government programs and personal shortsightedness and irresponsibility are as responsible for the inner city social meltdown as is a culture of white racism, it is little wonder that Sowell does not have a strong following among those of his own race. Despite this, his work (even when it is not entirely right) is farsighted, relatively academic oriented, and sound economically. Also, it does not hurt that Sowell's work relies on the materialistic and secular rather than the religious and spiritual, which arguably has been overly relied upon and stressed in the black American sub-culture. Key among his assumptions in this book is the idea that racial progress is not a "given," and is not inevitable. It is a thought so simple as to startle one upon first realizing how much truth there is to it. Given the intangible benefits that accrue to whites as a result of racist practices, the idea that they may willingly "give them up" or that the practice may wither away soon is as much "pie-in-the-sky" fantasy as taking a chariot home to heaven is. Sowell declares that history gives little support to the thesis that time alone will make relationships between the races automatically better. His view is that the process that will eventually cause racism to disappear is that it is economically foolish and counterproductive. And in this argument, it is not disrespectful to point out that his reliance on economic theory as the "last resort solution" to problems of race, suffers the same inherent defects as that of the Marxist theorists who also think that inevitably economic imperatives alone will cause white and black working classes to unite against the oligarchs that control the means of production into a final conflagration called the "proletarian revolution." Both theories make sense only "out there" in some "economist's idealized parallel universe." It seems clear even to me (a non-economist) that both theorists are patently aware that American racism can be explained very well in economic terms as "intangible side payme

Published by Thriftbooks.com User , 14 years ago
This book exudes what would be the common sense conclusions of many were the problems discussed not so emotionally charged. I strongly recommend that you read this book if you are interested in social justice. Dr. Sowell earned a Ph.D. in Economics from the University of Chicago, a masters in Economics from Columbia University and a bachelors degree in Economics, magna cum laude from Harvard College. Perhaps because the subject matter is so emotionally charged, Dr. Sowell has a footnote to references for almost every factual assertion. His only conclusions with which I disagree are his views on overpopulation. He looks at overpopulation as a global issue that has economic solutions. I tend to look at overpopulation as a local issue whether it presents itself in a family with 12 children when the family could only support two or three or whether it presents itself in a country like Haiti which does not have the population density of many successful countries, but which none the less can't support its population. Dr. Sowell is probably correct that such countries could maintain their populations with sufficient human and economic capital. The problem is that they don't have what it takes to maintain existing populations and are not likely to get what it takes. Population self restraint is an unlikely but more direct solution. Probably what frustrates those who oppose Dr. Sowell's views is that his facts are well researched and the logic usually irrefutable. Sometimes the truth hurts. If there is any shortcoming in this book it is that he proposes few concrete solutions to the world problems other than suggesting that we look at what has worked for other oppressed people in the world who have succeeded. You cannot read this book without seeing dozens of solutions that are implied but not enunciated. Perhaps this was his intent. I rate this book as one of the best books that I have ever read. I am currently reading a re-release of his book "A Conflict of Visions: Ideological Origins of Political Struggles" which also exhibits a profound insight on human nature. Read this book. You may disagree with many of Dr. Sowell's views, but you will be hard pressed to find good reasons to support your disagreement. If you then want to know why you disagree, read his book A Conflict of Visions. Jim Fuqua

combination of two of Sowell's interasts

Published by Thriftbooks.com User , 19 years ago
Thomas Sowell has written both about race and economics in other books so it was inteersting to see Sowell combine these tow areas like this. He looks at historical reaosn to look at why certain areas of the world wer bale to acquire wealth while others did not. He looks at how different group's migrations to different parts of the world were similar, similar to the race trilogy. He also looks at the first world and the third world now looking to explain their differences and histories

Published by Thriftbooks.com User , 20 years ago
The message of Thomas Sowell's "The Economics and Politics of Race" is simple and easy to understand: human cultures are not equal and some of them are better than others, their patterns of values having a more decisive role in the social perfomance of their respective members than any alleged, or even real and appaling, discrimination. Sowell demonstrates that ethnic groups perform differently, even when they are subjected to a similar hostile social condition, like the chinese, the jews or the blacks in the USA, in the beginning of the 20th century. The reason? A strong commitment, or not, to such values as hardworking, stable family ties and a firm will of improving their own social fate rather than blaming third ones by that same fate.Similarly, when the pretense source of damage disappears - for example, in societies where certain ethnic groups are largely the majority and "bias" against them is inexistent -, not only their poor social behavior does not vanish, but, contrarily, worsens in a terrible way...Concluding, culture really matters!

An important book by one of our most provocative thinkers

Published by Thriftbooks.com User , 23 years ago
This author is cited by Justice Clarence Thomas as one of the most important intellects of the 20th century. Further, he claims this book more than any other single book was the catalyst which provoked him to throw his hat into the public arena. More attention needs to be paid to this special book
Trustpilot
Copyright © 2022 Thriftbooks.com Terms of Use | Privacy Policy | Do Not Sell My Personal Information | Accessibility Statement
ThriftBooks® and the ThriftBooks® logo are registered trademarks of Thrift Books Global, LLC