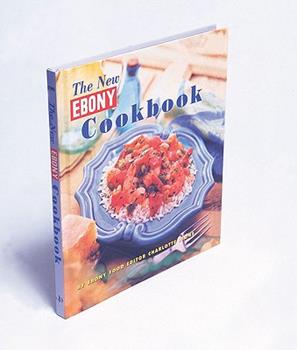 The Ebony Cookbook: A Date with a Dish

The first "A Date With a Dish" appeared in 1948; it reappeared as "The Ebony Cookbook" in 1962, and has stood the test of time. Freda DeKnight's selection from the thousands of American Negro recipes in her collection is unique. It preserves many dishes that might otherwise be lost to a TV-dinner generation. It provides a guide and reference for everyone, from novice cook to discriminating gourmet, who loves good food. The uses of herbs, spices and...

Published by Thriftbooks.com User , 14 years ago
This is a very good book it has some recipes my mother use to make.

Published by Thriftbooks.com User , 15 years ago
I bought this book twenty years ago and discovered that some of the recipes in the book were the very same as the ones the women in my family have used for decades. I used it so much that I needed to replace it. For the woman who feels challenged when it comes to culinary skills, I highly recommend this book. No one will ever know your secret, until you choose to share it!

Published by Thriftbooks.com User , 21 years ago
My step dad is a retired chef who cooked for 20 years at the Sands Hotel in Las Vegas. He grew up in Kansas City and knew the Gates family and Mr. Bryant through school and his music career in a famous African-American singing group in the 1940's and 50's. Last night I was discussing my search for new BBQ sauces and mentioned a couple of cookbooks I had obtained. I was surprised when he admitted he hadn't always been a BBQ master chef. Because of the people he was raised around I figured he just always knew the secret of how to BBQ. Dad read me six cookbook titles that he had never shown me or told me about, even though over a ten year period he gave me the recipe for his "secret sauce" little by little. The cookbook he said to get first is The Ebony Cookbook, by Freda DeKnight. He read me the ingredients for BBQ sauces 1-4 and I knew right then why I had to get this book first. My step dad knows BBQ like few others, and he can cook anything you name to perfection. If he said to get this book first well that's good enough for me. I don't need pretty pictures, I want to learn more about good Q and I'm confident this is the place to start.By the way Dad sang with the Ink Spots and by mentioning his name and our family relationship, Winnie Gates, at the 12th and Brooklyn Gates' BBQ, treated my wife and I like visiting royalty when we passed through KC in 1974. We were served drinks in her office and she comped our ribs! So please feel confident in Dad's view that this book is the place to begin a serious study of BBQ. He said there are lots of other valuable recipes as well.

Published by Thriftbooks.com User , 22 years ago
I had this book for over 10 years and used it so much I had to order another one to start cooking some more. This book has some really great recipes in it and after making them once or twice you can doctor them up and make each recipe your own. It possesses a lot of useful info for the new and experienced cook and you will really love some of the recipes included.
Trustpilot
Copyright © 2022 Thriftbooks.com Terms of Use | Privacy Policy | Do Not Sell or Share My Personal Information | Accessibility Statement
ThriftBooks® and the ThriftBooks® logo are registered trademarks of Thrift Books Global, LLC