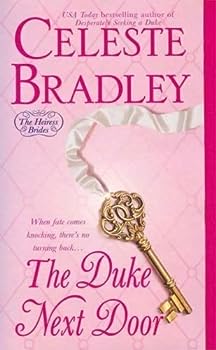 The Duke Next Door

(Book #2 in the Heiress Brides Series)

An intriguing pursuit of love by beautiful Dierdre Cantor, who is determined to inherit her grandfather's fortune. His riches come with a catch... his granddaughter must marry a Duke. When the Marquis of Brookhaven, Calder Marbrook, is left at the altar, Dierdre decides to swoop in and win his heart.

Published by Thriftbooks.com User , 13 years ago
I was not disappointed with this second in a series. Not sure why some of the reviews are so brutal, bad day perhaps? I found it to be a light, fast read.

The Duke Next Door

Published by Thriftbooks.com User , 13 years ago
Dierdre Cantor is the most beautiful of her cousins. The same cousins she is vying against to win her grandfather's fortune. Dierdre is determined to be the first to marry a duke. When Calder, the Marquis of Brookhaven and future Duke of Brookmoor, is left without a bride, Dierdre makes her move. Before her wedding day is over, Dierdre's hope of a fantastic new life is crushed when she learns that Calder has kept a devastating secret from her. Hurt and let down, Dierdre resolves to make Calder pay for his transgression. Whereas Calder is just as single-minded in his desire to make Dierdre his true wife in every way. Fans of the historical romance genre must try Celeste Bradley. The Heiress trilogy is a great place to start. The Duke Next Door is filled with sexual tension, sharp dialogue and heart scalding romance. You'll love Dierdre's stubborn resolve and Calder's sensual persuasion. The Duke Next Door is delicious! Annmarie reviewed for Joyfully Reviewed

Published by Thriftbooks.com User , 13 years ago
I had not previously read any Celeste Bradley books, enjoyed all three in the heiress bride series, The Duke next door wound up the series very well,with a few unexpected twists in the storyline. Each book I read left me wanting more, look forward to reading her spy series next. It's always nice to find a writer I am not familiar with, that way you don't have to have such a long time for the story's conclusions. I vote her books a very enjoyable read.

Published by Thriftbooks.com User , 13 years ago
In 1815 their late grandfather Sir Hamish Pickering, disappointed in his daughters not marrying up, placed a stipulation in his will that has his three granddaughters jumping. The first of the trio to marry a duke inherits his fortune. The competing cousins started with the rustic vicar's daughter Phoebe, the elegant Deirdre and the too tall Sophie, but Phoebe is no longer a contender having fallen in love with a duke's brother (see DESPERATELY SEEKING A DUKE). Deirdre hones in on ducal heir, "The Beast of Brookhaven" widow Calder Marbrook known for women jilting him at the altar like Phoebe just did. Deirdre tells Calder the truth just not the whole truth as she figures that is her best chance of winning; Calder agrees to marry her. Soon afterward, Deirdre meets her new spouse's young child Lady Margaret that she did not know existed; the stepdaughter from hell who does not want a new mama. Upset that her Beast was less than honest with her as he concealed his offspring for her, she wants out, but Calder wants Deidre as they play a sexual game of check and checkmate with one another. The second Heiress Brides' Regency romance is an entertaining often amusing historical. Deirdre is a terrific lead character as she wants the title to inherit the fortune, but wants love to come with her duke. She feels that is not asking too much although she reconsiders after meeting Meggie whether the money is worth it. Readers will appreciate their gender war inflamed by their love for one another and the brat. Harriet Klausner

This series deserves MUCH better than it's receiving!

Published by Thriftbooks.com User , 13 years ago
Book 1, "Desperately Seeking a Duke" was pretty good, but this, book 2 "The Duke Next Door" had me laughing and crying... I could *not* put it down! A 1-Nighter for me. Brava Ms. Bradley! =) I love that Meggie is just like Deirdre when Deirdre was that age. There is a lot of love, scheming, and plotting between the two in order to try and win Calder's love and attentions. And while was an uphill battle sometimes, I absolutely loved the 'plotting' scenes between Dee and Meggie.I haven't cried or laughed so much, in I don't know when. =) My ratings so far: 4* The Duke Next Door: 5* The Duke Most Wanted, I *CAIN'T* wait to read Sophie's and Grahams story next month! Cheers! And Happy Reading! =) Cali
Copyright © 2020 Thriftbooks.com Terms of Use | Privacy Policy | Do Not Sell My Personal Information | Accessibility Statement
ThriftBooks® and the ThriftBooks® logo are registered trademarks of Thrift Books Global, LLC