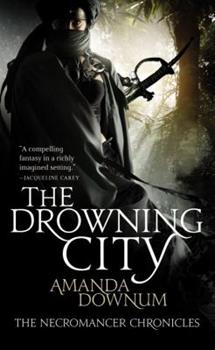 (Book #1 in the The Necromancer Chronicles Series)

Symir -- the Drowning City. home to exiles and expatriates, pirates and smugglers. And violent revolutionaries who will stop at nothing to overthrow the corrupt Imperial government. For Isyllt Iskaldur, necromancer and spy, the brewing revolution is a chance to prove herself to her crown. All she has to do is find and finance the revolutionaries, and help topple the palaces of Symir. But she is torn between her new friends and her duties, and the...

Published by Thriftbooks.com User , 12 years ago
Very good world-building, and an appealing and believable set of characters. The themes of book matched its length and I particularly liked that the characters were multi-dimensional, had frailities as well as strengths. Downum gets the "voice" right, my pet peeve on a lot of novels.

Published by Thriftbooks.com User , 12 years ago
I picked this book on a whim for silly reasons that I won't even go into here. After stumbling a bit on the first chapter, I ended up tearing through the rest of the novel with great speed. It grew on me with surprising speed, almost subversively -- I didn't realize how much I was enjoying it until I set it down and realized that I couldn't stop thinking about it. What really grabbed me: -The three main characters are female, and that in itself is a breath of fresh air. Furthermore, they have distinct personalities that don't fall into the female character stereotypes of the genre. No macho-men-with-boobs, no super-chipper-girly-girls. These women are all professionals who, to differing extents, have conflicts between their emotional/nurturing sides and their professional duties. Each resolves these conflicts in a different way. As a female reader, this felt very genuine without feeling pedantic. I could different read parts of myself into each of the characters and while I didn't always agree with their choices, I could understand why they made them. Many of the supporting characters are women, too, some in roles that I didn't expect, but none of them felt ridiculous. It felt as though the citizens of this world viewed men and women on equal footing. -None of the characters are perfect; even the supporting characters are flawed. No Mary Sues/Gary Stus to be seen. I still found that most of the characters were charismatic in spite of their flaws. There were also subtle nuances to the characters that allowed for some fun interpretations. For example, based on what I read, I presumed that two of the characters were gay and had a past affair. Am I right? Probably not. But it's great that the author has left some blanks in the characters for the reader to fill in. (It's also telling that I cared enough about the characters to start theorizing.) -The magic system was well fleshed out (no pun intended) and the mechanics followed a solid logic. The author obviously put a great amount of thought into it. -Tense and violent moments were described very well. I was on the edge of my seat a few times, and at a few triumphant moments, I made a little cheering motion with my fist. Pretty rare that a book sucks me in that deeply. -The length of the novel was perfect -- allowed for a fast pace without too much filler. By the end of the book, I felt that I understood all the intricacies of this world. What I felt could be improved: -I do agree with other reviewers here who said that the writing style could use a bit of tightening (perhaps a bit more involvement of the editor), though I didn't find this to be a huge distraction. The sentence fragments and some extraneous exposition clog up the flow in a few sections, and some sections had too many adverbs. Most of the writing was quite good, with solid description and word choices, and I think an extra coat of polish would have really made that shine. -I also agree that a couple of small issues made the

A different kind of dark fantasy

Published by Thriftbooks.com User , 12 years ago
I'll be honest, I wasn't sure The Drowning City would work for me. The cover is awesome and the back-cover blurb is intriguing, but for some reason, I just got the feeling it was a story aimed more toward a female readership. Before I even got to the map, though, I was impressed by Amanda Downum's choice of opening quotes. The first quote is from Emily Dickinson, which would have been impressive even by itself, but then just below that is a line from one of my all-time favorite bands, Rage Against the Machine. I said to myself, "Oh, Hells yeah!!" Any author who has the cojones to quote Rage Against the Machine has my complete attention and utmost respect. Moving on to the novel itself, The Drowning City tells the story of Isyllt Iskaldur, a necromancer and spy. Isyllt's mission is to help overthrow the Imperial government in the tropical island city of Symir. Symir is based on Southeast Asian culture around the time that they were starting to use primitive firearms. Downum's choice of setting took me out of my comfort zone. I tend to prefer medieval, ancient, and sometimes Victorian settings in fantasy novels, and so Downum had a challenge in winning me over (despite her excellent taste in music). She succeeded, however, and I enjoyed The Drowning City very much. The Drowning City is filled with dark and scary places, and characters that are often not quite what they seem. Ghosts, spirits, and demons are very real and a constant threat. Magic is more prevalent than what I usually care for in a story, but in this haunting tale it fits very well. I'm a big fan of the Dark & Gritty Fantasy but The Drowning City isn't quite that. I think I'd call it Dark & Haunting. Amanda Downum may just be a force to be reckoned with, and this is only her first novel. I'm anxious for the next installment: The Bone Palace.

Published by Thriftbooks.com User , 12 years ago
The necromancer undercover agent Isyllt Iskaldur travels to the dangerous "Drowning City" of Symir in the country of Selafai. The capital of Sivahra is famous for its monsoon weather and canals as it is for its deviant miscreant population. Currently the kingdom is under the military control of the invincible forces of the Assari Empire. She sees an opportunity to stir local trouble in order to prevent the Assari from invading her nation, next on their conquering agenda. However, the necromancer has some personal issues before financing the local insurgents as she is attracted to Imperial fire-mage Asheris. Her bodyguard Sivahran Xinai begs Isyllt to begin her mission as she loathes the violent empire that ruthlessly destroyed her clan. This is a terrific fantasy thriller with a unique heroine who uses necromancy to support her side as she tries to stir up trouble inside a mighty empire to keep them occupied internally in order for them not to occupy her country. Fans will enjoy Isyllt's adventures as a foreign agent acting sort of like a 1950s CIA undercover operative stirring up trouble in a third world nation like Iran heavily influenced by the Soviets who will bury her people if not stopped. Readers will relish the refreshing brisk first tale of the Necromancer Chronicles as espionage, politics, and military merge with magic in a fascinating fantasy. Harriet Klausner
Trustpilot
Copyright © 2022 Thriftbooks.com Terms of Use | Privacy Policy | Do Not Sell My Personal Information | Accessibility Statement
ThriftBooks® and the ThriftBooks® logo are registered trademarks of Thrift Books Global, LLC