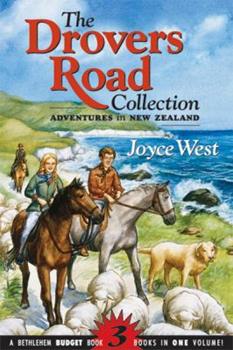 (Part of the Drovers Road Series)

Three books in one: Drovers Road, Cape Lost and The Golden Country While her sprained ankle mends, young Gabrielle (Gay, for short) Allan decides to write a book about her home and family life on a New Zealand sheep station. To know horses, sheep, cattle and the land; to interact with local Maoris and wandering Aussies; to ride in the hunt meets, and to fall quite often into adventures of every kind are, at least according to Gay, part of what normal...

"You Are An Impossible Family!"

Published by Thriftbooks.com User , 13 years ago
Set in the 1930's in rural New Zealand, Drovers Road is the sheep and cattle station of the Allan family. Gabrielle "Gay" Allan lives in the homestead with her three cousins, after her parents separated and left her in the care of her Uncle Dunsany and Aunt Belle (who are themselves cousins). Told in first-person narration by Gay herself - after she has sprained her ankle in circumstances that only become clear at the end of the story - the young girl recounts her life in the isolated, but busy world of the farmland, in which the entire countryside is her playground. The story (such as it is) is simply a variety of retellings of Gay's adventures as she grows from girl to young woman. Often accompanied by her closet companion Merry (her male cousin), Gay recounts stories concerning her neighbours, family members and various pets, as well as practical jokes played by herself and Merry, community events, oral folklore of the family and the land, and several amusing anecdotes. As Aunt Belle tells them: "All men are alike. Before they are married they like a girl with what they call spirit. Afterwards, they only want someone to say `yes dear.'" Most of the stories are light-hearted and humorous (such as when Merry and Gay dress up as a ghost in order to scare away a potential suitor for their uncle), but there are a few that are unutterably sad, such as the circumstances of Belle's wedding day. Likewise, there is a heavy sense of poignancy and nostalgia to the stories, as the book is permeated with the sense of time passing, never to be reclaimed. Even in the opening sentence, we are told that Gay intends to tell her story so that: "when we are grown up we can read it and remember how happy we were." Likewise, Gay and Merry begin the book as close as any two people can be, but gradually grow apart as Merry begins to become more involved in the man's work of the farm that Gay is inexorably excluded from. Add to this reoccurring theme of the warblers' song: "never the same again," and there is definite sense of the loss of childhood and innocence that adds a bittersweet touch to Gay's memoirs. The grownups of the story, Dunsany and Belle are portrayed sympathetically, with Dunsany bearing more than a passing resemblance to Atticus Finch of To Kill a Mockingbird, what with his unorthodox way of raising the children in his care, and Belle transcending the cliché of `the angel of the house' as a woman of exceptional strength and wisdom. Much of the overarching story concerns Dunsany's courtship with the children's schoolteacher, and each adult using their different methods to console the tomboyish Gay's unhappiness at growing up. Joyce West (who also illustrates her own work with minimalist ink drawings) captures New Zealand culture perfectly - and I should know, as I've lived here my whole life! In "Drovers Road" you'll find the rugged, beautiful landscapes, the food, the language, the flora and fauna, and a portrait of New Zealanders in this particu

Published by Thriftbooks.com User , 16 years ago
This is an excellent set of three books in one! We read them aloud as a family, and much of the time we were rolling on the floor laughing at the antics of the children! The book is set in the 1930's in New Zealand. They give the reader a flavor of a country not often visited by most. This book is well worth the investment. I have found our copy sitting on the bedside tables often. My children have already read it several times a piece.
Copyright © 2020 Thriftbooks.com Terms of Use | Privacy Policy | Do Not Sell My Personal Information | Accessibility Statement
ThriftBooks® and the ThriftBooks® logo are registered trademarks of Thrift Books Global, LLC