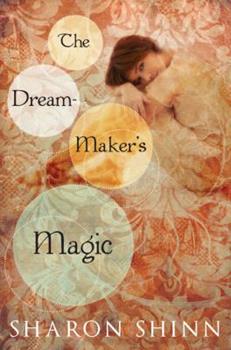 (Book #3 in the Safe-Keepers Series)

Kellen s mother has always insisted that her only child was born male, not female so Kellen has been raised as a boy. At school, she meets Gryffin, whose mind is as strong as his legs are damaged, and the two become friends and allies. A few years later, the two get jobs working at an inn nearby. When it is discovered that Gryffin is the kingdom s new Dream-Maker someone whose mere presence can help dreams come true he is whisked away to the castle,...

Published by Thriftbooks.com User , 13 years ago
This was a great book :) As usual Sharon Shinn puts a smile on my face when I read her books!

Published by Thriftbooks.com User , 13 years ago
The Dream-Maker's Magic (2006) is the third fantasy novel in this milieu, following The Truth-Teller's Tale. In the previous volume, Melinda the Dream-Maker came to Merendon for the Summermoon festivities and brought several dreams to fulfillment. Adele, Edela and Roelynn found their true loves, but Karro found that his misdeeds had become public knowledge. In this novel, Amelia Carmichael is traveling and suddenly gives birth to a baby boy in the town of Tambleham. She loses a great deal of blood and doesn't see the child again until she reaches home in Thrush Hollow. There she discovers that the child is a girl. She and her husband Stephen name the child Kellen, which is both a male and female name. Amelia still contends that the child is a boy and keeps an alert eye on the child in cause she reverts back to a boy. She even talks her husband into consulting a Truth-Teller to determine whether she had ever been a boy, but is told that she is now, and always has been, a girl. Kellen grows up wearing boy clothes and usually playing with the boys. Since she does all kinds of chores around the house -- including chopping wood -- she can keep up with the boys in most of their activities, except fighting. A friendly Safe-Keeper teaches her to box and other self-protection tricks and she soom convinces the bullies in her school to leave her alone. In this story, Kellen's first -- and best -- friend is Gryffin, a crippled boy who is the brightest student in her school. He is even tutoring the younger students. Although Kellen is not a very good -- or willing -- student, she learns much from Gryffin. Later, Kellen is asked to convince Gryffin to tutor Sarah Parmer, an older student. Kellen and Gryffin go to the Parmer home several days a week, Gryffin teaching Sarah and Kellen doing various chores about the house. When the Parmers build a post house for the new stage route through Thrush Hollow, Kellen is hired as a waitress and maid. For the first time, Kellen wears girl's clothes in public. Of course, she wears her normal boy's attire to and from the post house, but she puts on a smock and apron while working there. Although Kellen makes her first few dresses, Sarah soon presents her with two seamstress made smocks as a gift. They are her most favorite clothes. This story tells of the friendship between Kellen and Gryffin. While Gryffin lives with his uncle, Frederick resents having to take care of a cripple. Eventually Gryffin moves into the post house and does clerical work for the Parmers. As with the previous books in this series, the author invokes surprises throughout the story. These changes in Kellen's life strengthen her resolve and increase her dreams for others. Then comes the final surprise, which turns her whole life upside down. Highly recommended for Shinn fans and for anyone who enjoys tales of determined youngsters, changed circumstances, and positive magic. -Arthur W. Jordin

Published by Thriftbooks.com User , 14 years ago
When Kellen Carmichael was born, she was a boy. Or at least that is what her mother believes. Her mother swears that through her fever and illness, she still saw her baby for a moment, and that baby was a boy. By the time she got home two weeks later and was recovered enough to care for the baby, she discovered that instead she had a daughter. Kellen has been living with her mother's delusions ever since. Convinced that her daughter would change back into a son, her mother made her dress as a boy and act like one. While Kellen and everyone around here knew she wasn't really a boy, Kellen still slipped into the lifestyle to please her mother and keep down the mayhem at home. Even when a Truth-Teller informs her mother that Kellen has always been a girl, her mother will not let go of that glimpse on the birthing bed. And so Kellen lives a life where she never quite fits in, not accepted as a boy, and too rough for the other girls. When she is finally made to go to school at the age of eleven, she meets another outsider, Gryffin, whose legs were tangled at birth and are of little use to him now without crutches. The two develop a quick friendship, both seeing past how the world views them. This friendship helps Kellen see who she really is, and she meets others who accept her for herself. Life is perfect for a time, as she's allowed to wear skirts, work at an inn with people who care about her, and be with her best friend Gryffin everyday. All that changes when the magic of the Dream-Maker chooses Gryffin for its new host, and suddenly Kellen is no longer sure of her place in the world, nor who she might become. The third book in a loosely connected trilogy by Sharon Shinn, The Dream-Maker's Magic should be fine to read on its own. In fact, I read the second book, The Truth-Teller's Tale, before I read the first one, The Safe-Keeper's Secret. All three books take place in the same kingdom and the major characters of previous books are mentioned or make short appearances in this one, but the tale is wholly centered in this book. The world has an interesting magic in it. Instead of sorcerers or such, the only magic in the world is that of secrets, truths, and dreams. Most people live without much magic in their life, but the Dream-Maker exists to help people's dreams come true. The Dream-Maker always has a painful past (physically or emotionally), and it seems that the pain makes the magic stronger. They don't control whose dreams come true, but dreams and hopes are often fulfilled when a Dream-Maker is around. There are also Safe-Keepers and Truth-Tellers, who make larger appearances in the other books, but the Safe-Keepers keep whatever secrets they are told until it is the right time to unveil them, while Truth-Tellers can only tell the truth, though it may not be the truth people want to hear. I love this element of simple magic, and the way all three books focus on village life and the characters involved. I smiled through this whole book-it'

Published by Thriftbooks.com User , 14 years ago
The thing about Sharon Shinn's trilogy is that she world-builds so subtly you scarcely notice how well she does it--you're too busy focusing on her strong characters. The Safe-Keeper's Secret, The Truth-Teller's Tale, and The Dream-Maker's Magic: Each of the books represents one of three special types of magically gifted individuals in a slightly medieval kingdom--safe-keepers, who keep people's secrets; truth-tellers, who speak sometimes unwelcome but much-needed truths; and dream-makers, whose influence can bring others' dearest dreams to pass. There is more than one Safe-keeper and Truth-teller in this society, but only one Dream-maker. The story begins with Kellen, who struggles with her mother's inability to acknowledge that she is a girl. She forms a friendship with Gryffin, whose legs are deformed and whose guardian, his uncle, is abusive. Together these two face challenges, make other friends, and learn how to live their lives. They are compellingly real and appealing characters, and spending an entire book with them is a deeply satisfying experience. A couple of things stand out for me. I like Shinn's touching Wintermoon rituals and her Summermoon Fair. I also find it intriguing that the Dream-maker, with all his power, is someone who has paid a great price in terms of a life of suffering. Indirectly, that reminds me of the themes in Ursula LeGuin's story, "The Ones Who Walk Away from Omelas," about a society where one person's happiness is sacrificed completely in order to pay for the happiness of others. The Dream-Maker's role isn't quite that extreme, but it is thought-provoking. Shinn avoids the easy road that most fantasy writers take when they simply pass out hefty helpings of trouble-free magic to characters like so much Halloween candy. Although a few plot twists are coincidental, they are rewarding to the reader. I particularly like the way one such development casts a formerly pathetic and unreliable character in a new light--very nice irony! There's something poignant and just a little haunting about Shinn's three books. What's more, several of her key characters, while they are certainly fallible, seem aware of their effect on others in a way that inspires without being preachy. Shin seems to be saying that even though there are plenty of selfish, mean-spirited people out there, don't forget that many others are kind and regularly reach out in an effort to improve the lives of those around them. This is a balanced and heartening message in a world in which the nightly news might incline young readers to think that serial killers and terrorists lurk around every single corner. Perhaps it's because I read it so recently, but I think The Dream-Maker's Magic is probably my favorite of the three books. I happily recommend that you read them all.

Published by Thriftbooks.com User , 15 years ago
The final installment of Shinn's trilogy which began with The Safe-Keeper's Secret (2004) and The Truth-Teller's Tale (2005) features a young girl Kellen whose mother is convinced that she is a boy, and treats her as thus. When Kellen begins school at age 11, she meets Gryffin, a young man who needs assistance walking because of a birth defect, but whose mind soaks up information like a sponge. Kellen and Gryffin become inseparable throughout their school years, supporting one another in their difficult situations. When Gryffin needs shelter from his uncle's abuse, Kellen helps him and they become friends with many of the new travelers who visit their small town's new stagecoach stop. When it is discovered that Gryffin has taken on the magic of the Dream-Maker, Kellen has to let him go discover his powers on his own, until she follows, once again in the guise of a young man, to find that wishes do come true no matter who you are.
Copyright © 2020 Thriftbooks.com Terms of Use | Privacy Policy | Do Not Sell My Personal Information | Accessibility Statement
ThriftBooks® and the ThriftBooks® logo are registered trademarks of Thrift Books Global, LLC