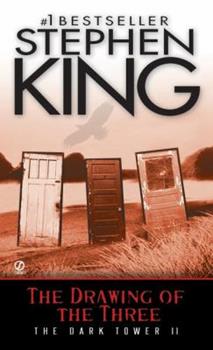 The Drawing of the Three (Dark Tower)

(Book #2 in the The Dark Tower Series)

In 1978, Stephen King introduced the world to the last gunslinger, Roland of Gilead. Nothing has been the same since. More than twenty years later, the quest for the Dark Tower continues to take readers on a wildly epic ride. Through parallel worlds and across time, Roland must brave desolate wastelands and endless deserts, drifting into the unimaginable and the familiar. A classic tale of colossal scope--crossing over terrain from The Stand , The...

Published by Horror crazy , 2 years ago
The Dark Tower II: The Drawing of the Three is a marvelous sequel to Stephen King’s The Dark Tower I: The Gunslinger! Not only is The Drawing of the Three considerably longer than the first book, it makes excellent use of its 450-plus pages. This adventure, packed with danger, action, suspense, and terror, relates The Gunslinger’s efforts to bring together his allies, including Eddie and Jake, resolving a conflict that arose from his first acquaintance with Jake and the events that followed, all detailed in the first book. And it does it with the utmost satisfaction! It also details his introduction to his other allies, Eddie and Susannah, who is at first known as Odetta. That seems to be the biggest part of what truly makes this an adventure, discovering Roland’s strange, intriguing means of traveling to Eddie’s and Susannah’s realities, and to the time periods in which they each reside. The real adventure, however, lies in the dangerous situations The Gunslinger finds himself in, upon meeting Eddie and Susannah, dangerous situations he finds himself rescuing them from, making this second installment of the series absolutely suspenseful and exciting. Thrilling, intriguing, exciting, terrifying, and fun, with superb characterizions, and so many twists and turns, that’s more to the story than I could ever describe here, The Dark Tower II: The Drawing of the Three is a spectacular continuation of Roland’s quest! I’m glad that there’s so much more to the plot of this second book than I could tell you about. This wonderful story is too good to spoil by describing it in as much detail as anyone can! I would be lying if I said that I recommend this book to fans of the series. After all, why should I recommend just one book in this epic series when the entire series, including the four books I’ve read, are 💯 percent worth recommending!

Great continuation of the Gunslinger story.

Published by Greg , 3 years ago
This is book 2 of the Gunslinger series. I really liked book one and am enjoying this book so far. The best Stephen King books (in my opinion) are The Stand and IT. Although the Shining and Doctor Sleep are both must reads also.

A great improvement over the first one...

Published by Thriftbooks.com User , 17 years ago
"The Drawing of the Three" focuses on Roland gathering his "ka-tet" (his party or fellowship if you will). He meets Eddie Dean, a junkie from the 80s, and Odetta Holmes, a civil rights activist from the 60s. Eddie Dean is a cool character, I loved him right away (when Allie and Jake died in the first one, I thought "Good, now Roland can get on with his quest", but when Eddie almost died in this one, I thought "Noooooo! Not Eddie Dean!"). Odetta Holmes isn't as cool, but she is interesting (she's a double-amputee with a split personality, one of whom is extremely dangerous--what's not to like about that?). Roland is as cool as ever; he's so Stoic and tough-as-nails. I couldn't help but crack a smile as he gave some Very Bad People what they deserved. This volume puts aside the ridiculous prose of the first book, and it seems a lot shorter than it is. Quite frankly, it's hard to put down. Highly recommended. I bought the third volume today, and I can't wait to see what happens.

The Prisoner, The Lady of Shadows, and Death

Published by Thriftbooks.com User , 18 years ago
The Drawing of the Three is the second book in the Dark Tower saga, which is of course, the greatest series of books ever written. This volume introduces Eddie Dean, Odetta Holmes/Detta Walker, and Jack Mort. Eddie Dean is a heroin junkie from the 1980's. Odetta Holmes is a civil rights activist from the 1960's, and Detta Walker is her dark half. Jack Mort is a serial killer from the 1970's. The second stanza continues the tale of Roland, the last of the Gunslingers who continues his trek towards the Dark Tower. He happens upon three doors standing freely along the beach. The doors open onto three different times in "our" world, out of which, Roland draws his three...(sort of)The tale itself is very well written, and the dialogue is far superior to the original text from the Dark Tower I. This is where the course of Roland's story really begins to take its shape. From the first paragraph, picking up six hours after Roland's palaver with the Man in Black, the book moves forward at an almost un-relenting pace. Anyone who likes to read period, will enjoy this book.

Roland is one bad mf'er

Published by Thriftbooks.com User , 18 years ago
This is an excellent follow-up to Wolves of the Calla and surpasses that one as well. People worried about where the series is headed should be rest assured that the direction Wolves took at the end is handled better than you might expect. With all the action and three separate narratives going on this DT entry harkens back to the two best DT books, DTII--Drawing of the Three and DTIII--The Waste Lands (DTIII still retains my title as favorite in the series). Some prior situations get resolved but all in all this book sets things up for the final showdown in DT7 (with yet another cliffhanger to leave the reader off). Here's hoping that the final book can live up to mighty expectations.

A masterful addition to the series

Published by Thriftbooks.com User , 18 years ago
This book is a fitting sequel to the first of the spell-binding series- The Gunslinger. It's a definite page-turner and in the end will leave you begging for more. Although personally I thought The Gunslinger left more to be desired, The Drawing of the Three more than makes up for its minor flaws and leads you ever closer to the climax of Roland's epic quest. One of the Dark Tower Series' greatest strengths is Stephen King's remarkable description. It makes you not only see but feel the sorroundings. King definetely showcased this talent in this book, and put you through one heck of a ride. From the moment you begin the book you are taken to a a different world, Roland's world, a desolate beach full of terrible "lobstrosities" that King takes great pains to describe. King also describes New York City in depth through Roland's eyes, a truly monumental challenge considering Roland is oblivious to the technological marvels of our world. But the greatest feat the book has accomplished is, without question, the whimsical ensemble of characters King creates. The cast is full of interesting stories, an odd group of crusaders bound by the same "ka". Eddie Dean is perhaps the most memorable, a heroin addict fighting his addiction and the New York Underworld, reluctantly "drawn" by Roland to quest for the great tower. But Odetta Homes can't be overshadowed- as well as her secret evil double- Detta Walker. She's a skitzophrenic, fighting her dark half which threatens to rule her, the makes of a brilliant story. The third character who is drawn also fits suprisingly into the storyline and sets the stage for a thrilling climax. And in the middle of it all, lies Roland, the lone gunslinger. Haunted by his past and obsessively bound by his duty to search for the Dark Tower, he is the central character, the pinnacle of the books. He is perhaps King's greatest creation, his struggle is inspiring, he is the nail that holds the fantastic story together. You can't help but wait for the final climax, the next installment- it'll leave you begging for more. King has worked wonders with this book. It was an awesome read!

Published by Thriftbooks.com User , 23 years ago
Wow, fantastic. if you've read "The Gunslinger" and then gave up, then i encourage you to read this, the second volume. It is SO much better than the first! With "The Gunslinger" you could tell it was written while King was still in college because it was pretty rough around the edges and (forgive me for saying this about a SK story), a little boring. But "The Drawing Of The Three", in which Roland must pass through three doorways to 1980's America, is riveting, fast-paced,emotional, and yes, humorous. Some parts where Roland is trying to get used to our world are very funny (the "tooter-fish popkin" incident springs to mind). The 450 pages just fly past, but it gives some indication of the epic saga that King is creating, since even at the end of Volume II, we are still near the start of the journey. I only hope that once Roland reaches his Dark Tower (if he ever does?), the tale doesn't fizz out. All in all, this book offers much more bang for your buck than The Gunslinger, because it's twice as long, written twice as good, and there's twice as much action :)
Trustpilot
Copyright © 2022 Thriftbooks.com Terms of Use | Privacy Policy | Do Not Sell or Share My Personal Information | Accessibility Statement
ThriftBooks® and the ThriftBooks® logo are registered trademarks of Thrift Books Global, LLC