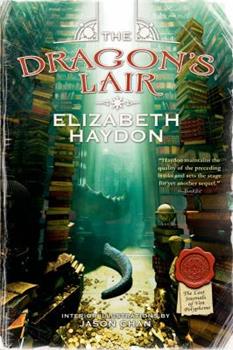 (Book #3 in the The Lost Journals of Ven Polypheme Series)

The Dragon's Lair, the third volume in Elizabeth Haydon's critically-acclaimed The Lost Journals of Ven Polypheme series for middle grade readers, is now available with a stunning new cover. Barely one day after fulfilling his second mission for King Vandemere as Royal Reporter of the land of Serendair, young Charles Magnus Ven Polypheme--known as Ven--is off on another adventure. To keep them safe from the wrath of the Thief Queen, whose rage at...

A Merrow On Land

Published by Thriftbooks.com User , 11 years ago
The Dragon's Lair (2008) is the third Fantasy novel in the Ven Polypheme series, following The Thief Queen's Daughter. In the previous volume, Ven and his friends escaped the Thief Queen and the Raven Guild by climbing down into a well. There the Rat King showed them an underground world and then a way out. Ven and friends returned to the Crossroads Inn and were welcomed by Mrs. Snodgrass with food and chores. Then Ven reported to the High King and finally understood the tale of the light amidst the dark. He also found that he had grown another hair in this beard. In this novel, Ven Polypheme is a Nain, a short person with hairy feet. His family has been living on the surface for three generations, but every other Nain lives underground. All Nain grow slowly and live much longer than humans. Vandemere is a human and is the High King of Serendair. Naturally, he is not the only king on the island. Other species have their own kings. He has appointed Ven as his herald to continue the explorations that he had to forgo when he became king. Char is a young human and Ven's best friend. He was a cook's mate on the Serelinda -- where he got his name -- but now he lives in the Hare Warren at the Crossroads Inn with Ven. Clemency is a young human, a curate-in-training, and the Steward of Mouse Lodge. Clem has the ability to communicate with the Spice Folk -- who are very small invisible flying sprites -- and is the assistant pastor to these creatures. Saeli is a Gwadd, a very small humanoid who talks with animals and has mystic powers over plants. She lives in the Mouse Lodge with Clem. Ida is the Thief Queen's daughter. She resides in the Mouse Lodge when she is not in jail for theft. She is a very annoying person, but has done many favors for Ven. Tuck is a Lirin and the King's chief forester. He was responsible for planting the topiary hedges on the castle grounds. Amariel is a merrow, who saved Ven from the shipwreck. She followed him to Serendair and they talk from time to time. In this story, the High King comes to visit the Crossroad Inn to tell Ven and his friends to leave very soon. The Thief Queen is trying to break out of the Gated City to find them. Moreover, the High King also has an errand for Ven. Ven goes to town with Tuck to talk Amariel into changing into her land form and coming with them. She removes her lacy red cap and hands it to Ven. Then she begins to change. Then they walk back to town and look for Tuck. Ven is distracted by Madame Sharra and Amariel wanders off. Madame Sharra gives Ven an oval stone to take with him and then he learns that Amariel is gone. Van finally finds Amariel and takes her to the wagon. As Tuck drives out of town, the scale explodes with color from the rising sun. Tuck looks at the stone and says that it is Black Ivory. Then Ven examines it and discovers a dragon scale contained within. On the way to the Crossroads Inn, Amariel asks questions about things that she sees

Fun for Young Adults (and oldies as well!)

Published by Thriftbooks.com User , 12 years ago
I loved the first two, but this one is even better! I have been a fan of EH since I read the Symphony of the Ages books, and thought I would try 'The Floating Island' on a whim to read to my 9 year old. We did and he loved it and so did I. Ven's struggles with events, with his friends, and with his enemies make for great dinner table (or School Room) discussions. She even has suggested topics for discussion in the back of all three. These are fun, fast moving books. They can be read individually, but it is wonderful to read together - many events are inter-related and build on each other. Fun to read aloud and very entertaining.

I love these books, I love this author

Published by Thriftbooks.com User , 13 years ago
One of the greatest YA and adult fantasy writers out there today is Elizabeth Haydon. I fell in love with her Symphony of Ages series years ago, mostly because of the beautiful crispness of her writing and the amazing characters she portrays, with humor showing up in many unexpected places. I found these books last year and have read them with my kids. They are now a favorite family discussion. This most recent book is a jewel, although I don't think I will ever be as fond of a book as I am of The Floating Island. In thise book we begin to see that each of these tales is like a piece of the puzzle that King Vandermeer uses to help him figure out the ways of the world. While every book's story is self contained, when strugn together they seem to be forming another tale, a riddle within a riddle. We can't wait to see what this turns out to be. This, by the way, contains my favorite dragon character ever. I used to wonder why there were dragons on the covers of the first two books, but none in the stories. Now I get it. Highly recommended

Published by Thriftbooks.com User , 13 years ago
Once again this series hits a homerun with my son. Very rarely am I able to get my 15 year old to read, but when this pre ordered book finally came he read it in 2 days flat. Believe me when I say your boy will love this book and this series. Wonderfully captivating for imaginations of all ages.

Published by Thriftbooks.com User , 13 years ago
The Dragon's Lair is the third book of Elizabeth Haydon's new series for young adults, The Lost Journals of Ven Polypheme. The story opens up with Ven helping Char gather the food that is being dropped-off at The Crossroads Inn when a farmer helps him unload. The farmer turns out to be King Vandemere from the Castle of Elysian in disguise, who warns Ven that the Thief Queen is out to capture him and his friends. Understanding the warning of the King, who advises Ven to take his friends and run beyond the Great River, he agrees with his advice and a plan that he assigns him and is greeted by the King's forester, Tuck, a Lirinved (the in-between) who will guide them and protect them from the Thief Queen and her spies, huge flocks of Ravens that hunt them wherever they go. Meanwhile, the Kingdom of the Nain and Lirin are against each other, threatening to disrupt in war. Even worse, a Dragon by the name of Scarnag is terrorizing the Nain to get back his treasure that was taken from him by the Nain. It is up to Ven to avoid the dragon and find out what exactly was stolen, and to trade with the Lirin/Nain to get something that King Vandemere wants, even if it may cost him the throne! When Ven heads back to Kingston with Tuck, he sets-out to get Amariel to come along with him, the Merrow that saved him from the Fire Pirates. He is also greeted by Madam Sharra, who gives him one of the cards of her deck that is tucked-away in Black Ivory, a dragon scale from the Primeval Wyrm spoken of in The Symphony of Ages series and the first book of the War of the Known World trilogy (Requiem for the Sun/The Assassin King). This is a nice treat for any of the legions of fans for the Symphony of Ages, which is a World Wide Bestseller series, but is also a nice introduction and "sugar-coated flavor," for any one younger who are just experiencing Elizabeth Haydon's enchanting world for the first time. I highly recommend this book to anyone, young or old, who enjoy a good story, or who enjoyed J.K.Rowling's Harry Potter series or J.R.R.Tolkien's Lord of the Rings trilogy. I acclaim Haydon as the best fantasy author of this age, don't let her books slip you by! And if you read some of Haydon's Lost Journals, than try her Symphony's on for size if you haven't already! Elizabeth Haydon is right up there with the best fantasy authors known to date!
Copyright © 2022 Thriftbooks.com Terms of Use | Privacy Policy | Do Not Sell My Personal Information | Accessibility Statement
ThriftBooks® and the ThriftBooks® logo are registered trademarks of Thrift Books Global, LLC