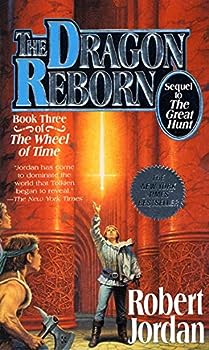 The Dragon Reborn (The Wheel of Time, Book 3)

(Book #3 in the Wheel of Time Series)

The Wheel of Time is now an original series on Prime Video, starring Rosamund Pike as Moiraine! In The Dragon Reborn, the third novel in Robert Jordan's #1 New York Times bestselling epic fantasy... This description may be from another edition of this product.

Published by Thriftbooks.com User , 16 years ago
Robert Jordan's Wheel of Time series is legendary in its length (11 books, so far, and still not over), so why care about what happens in lowly Book 3? Because ee have some neat plot points, the overall story arc starts to crystallise, and mainly, it is the most enjoyable read of the first three books. I was reminded of Star Wars Ep. 1 - the book has a resolution of it's main plotline, but it is obvious that there is lots more of the saga to go, especially since we know that, at the end of the book, certain baddies are still on the loose. After bringing most of the main characters together for the climax of Book 2, Jordan cleaves the group again for separate journeys to the city of Tear. Prophesy says that only the Dragon Reborn can wield the magic sword stored in the vault of that city's fortress. Some have complained that it takes a series of unbearable coincidences to get everyone to the final battle, which would be a valid complaint except that Jordan's world is designed in such a way that unbelievable coincidences can (and often do) occur, because of the overriding "will" of the Wheel of Time. This is a standard literary device, well-known to the ancient Greeks (the Fates) and Arabs (Kismet). It could potentially become a crutch, but in this book Jordan convincingly brings the threads of a number of seemingly diverse storylines together. The reason everyone ends up in Tear? - they all know (or are chasing people who know) that the Dragon Reborn will show up in Tear to claim the magic sword. It's only a matter of timing (they all arrive at the final battle simultaneously) that needs invocation of the Wheel's influence. Curiously, this book focusses on 3 characters, two of whom are my least favourite in the series (Nynaeve, the petulant bully, and Mat, the selfish prankster). Fortunately, Jordan mostly steers clear of the constant and irritating internal editorialising by these characters that so plagued Book 2. Jordan also finally reveals Mat's "special power" (of the three "Ta'vern," we already know that Perrin can speak to wolves and Rand can channel the One Power). I will not reveal it in this review, but it is an ingenious and well-designed power that (so far) is correctly limited in its scope. Book 1 was very good, but was clearly a travelogue to get us oriented with Jordan's world. Book 2 was a 400-page story trapped in a 600 page book, becoming unbearably repititious in places. Book 3 finally lives up to the promise of the series - we are now well underway with the adventure of the reborn Dragon.

The Wheel of Time continues with another great installment

Published by Thriftbooks.com User , 16 years ago
As with other Wheel of Time books, I prefer to limit this review to this particular book and judge it for its own merits and not for the series as a whole. In this, the third installment of the Wheel of Time, the characters find themselves going in different directions while pursuing various tasks. There is more and more intrigue as various powers decide what to do about the many conflicting reports they have of the events in previous books. As is common with sequels, there is a lot that won't make sense to a reader that hasn't read the previous books, but this book still manages to keep the components of a stand alone book. A clear beginning (characters trying to decide what to do about the situation they now have due to prior events) and a clear ending (The main objective of this novel having resolution). What I liked: *The resolution of a couple of threads, the opening of some others. *Rand and Mat becomming more Independent, signs that Perrin may be getting there as well. *More adventure in a deep, very well presented world. *Battles involving the Aiel *More Battles involving the Forsaken What I didn't like: *The constant cat-fighting among Egwene-Nynaeve-Elayne (though at times this was actually quite amusing). *Faile. One of my least favorite characters. In summary: All in all, this is another great work by RJ that takes you on yet another adventure which not only resolves the quest at hand, but also resolves some issues that go back to the previous book. I give it 5 stars without hesitation (Not liking certain characters just isn't a good enough reason to take a star away).

Published by Thriftbooks.com User , 21 years ago
Let me tell you how good this book is. My public library didn't have books one and two of the Wheel of Time series, so I was stuck with book three (a friend of mine had recommended the series to me). But even though I was missing out on roughly 2000 pages of material, Robert Jordan developed his characters and his world so well that I felt that I wasn't missing anything at all. I remember that I couldn't wait to come home so I could read this great book. I think the biggest thing that I liked about it was that it was ORIGINAL. No sorcerers (at least not by that name), no fire-breathing dragons. The characters treated the enemies as if they were REAL, causing me to further believe in the story. I like how RJ starts off the book by putting one of the characters in a wicked catch-22 situation. And RJ is very skilled when it comes to ending a chapter. Some authors are so boring that you have to push yourself to turn the page. Not so with this book. But most of all, I liked the part towards the end, where they're on the rooftop, which reminded me of that chimney-sweep dancing scene in Mary Poppins. Sorta. As for those of you who complain that Rand becomes the Dragon Reborn too quickly, I don't know what you're talking about. It takes him 2000+ pages to become the Dragon Reborn. All throughout the series we see how he is slowly making the transition from denial to acceptance. In this book he finally accepts who he is. Believe me, a slow transition like that is far more believable than one of those dumb books where the protagonist realizes that he's a prince on page 50 and kills the "ultimate" evil on page 300. Do yourself a favor, pick up this book and read it. I've read it FOUR times (and counting). In my mind, this is one of the top three Wheel of Time books. I'd rather read a bad (not that he's written any bad books) RJ book than read some stupid L. Sprague de Camp book who is a PASTICHE author, who can only make his living finishing uncompleted ROBERT E. HOWARD Conan stories!

The Dragon Reborn - A Bestseller, or Too Long to Enjoy?

Published by Thriftbooks.com User , 22 years ago
The Dragon Reborn really is a good book. Now, lots of people would be discoraged with this book, due to the fact that it's HUGE! Some have commented that the book needs a better editor. Now in past books, Robert's done some of that too. It's huge, but it's all neccary. I think Tolken is master of reduntant things, although Jordan can do some odd things. (In the Eye of the World, he screws around with time so bad my sense of the book was mangled!) Of course, this shouldn't discorage you. There are great FAQs, and the Guide book "The World of Robert Jordan's Wheel of Time", which is amazingly helpful. Further more, the details are wonderful. The characters clash, and it gets pretty annoying at times, but they're in character. The only qualms I have about this book, and the whole series, is that as the books go by, Rand, Egwene, and Nyvane all get slowly meaner. Nyvane and Egwene have very good reasons, which you'll have to read about, but even if Rand is in character, he's awful! And he just gets worse. Other than that, the chracters are great, the story is great, the setting is wonderful. Read this, or I'll send the forsaken out after you!

THE BEST BOOK of the BEST SERIES!

Published by Thriftbooks.com User , 22 years ago
My title says it all! Robert Jordan is for sure the best Fantasy writer ever! He is currently tied with The Great J.R.R Tolkien if you ask me! This book has a wonderful storyline which twists and turns, and interwines with other characters. All the characters are very well developed, and you get a look into their mind and soul. The adventuring is great, with all the new cultures discovered for us, for the first time. The storyline continues with Rand being drawn to Tear, where the sword of Collandor is being held. Only the Dragon Reborn (Rand) can wield it, and when he does that is a big sign that the Last Battle is coming. Also, all the other main characters get drawn to Tear for different reasons. This book also explores the existance of the Black Ajah of Aes Sedai, and the Dream World. Also, the characters make a stunning discovery about the Forsaken(Extremely powerful Aes Sedai of the olden days who were sealed with the Dark One)...The only bad thing I can say about this book is that Rand is barely at all in it. He is a secondary character in a book that is about him and his destiny. Although, this may be a good thing, because Rand didn't do that much in his travels except slowly go crazy and think everybody was against him.I recommend this book to everybody!
Trustpilot
Copyright © 2022 Thriftbooks.com Terms of Use | Privacy Policy | Do Not Sell or Share My Personal Information | Accessibility Statement
ThriftBooks® and the ThriftBooks® logo are registered trademarks of Thrift Books Global, LLC